It Takes the Right Pants 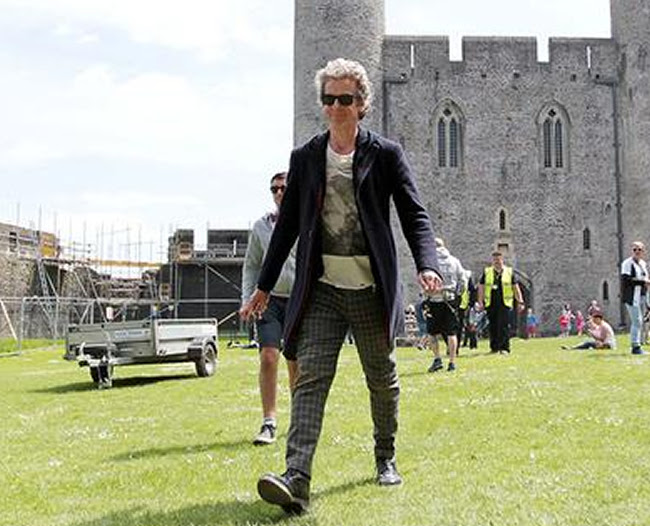 This is a recent set photo from the filming of an upcoming Doctor Who episode. I can't begin to say how strongly I approve of what looks to be tartan trousers. I sure hope it's not just Capaldi's civvies. Now if they'd give him some spectator shoes, lose the t-shirt and hoodie . . . Well, I guess they can't just dress him like the Seventh Doctor. It would be great, though. Surely spectator shoes wouldn't be too much to ask--the Fourth Doctor also wore spectators in Seeds of Doom.

It was two Eighth Doctor audio plays I listened to this past week, The Creed of the Kromon and The Natural History of Fear, two stories following up from Scherzo where the Doctor and Charley are stuck on a planet without the TARDIS. The Creed of the Kromon introduces the companion C'rizz--pronounced "Kay riz" somehow--played by Conrad Westmaas. I gather he stays with the series for a very long time though from his introduction I can't think why. He's not a particularly interesting a character, reminding me of a watered down version of the Fifth Doctor's companion Turlough--he's a bit cowardly and he's not human, the first non-human companion the Doctor's had since the Sixth Doctor's companion, Frobisher, that I know of. Not counting robots, that makes only four non-human companions to appear on the television and audio shows, unless I'm forgetting someone. Of all of them, C'rizz looks the most non-human though only in that his skin changes for his environment like a chameleon and he has some forehead ridges. Considering the audio format, I don't know why they didn't go all out and give him wings and tentacles or make him a big amoeba or something.

The Creed of the Kromon is a correspondingly dull audio, being perhaps the most default Doctor Who story I've heard--evil alien civilisation, female companion is captured, the Doctor is forced to help some sketchy group but manages to make plans and friends, etcetera.

The Natural History of Fear is far more interesting, introducing a totalitarian civilisation where all questions are outlawed, forcing the characters to communicate entirely with statements--there's a lot of "Tell me what you heard" and "Report on the current status." Among the people are, inexplicable, the Doctor, Charley, and C'rizz, or at least their voices but all of them have other identities and are integrated into the society--Charley is a nurse and the Doctor is someone called the Editor, an inquisitor and enforcer of sorts. The play rather nicely takes advantage of the audio format in constructing its mystery and the ending is wonderfully nightmarish.