Comus at the Window 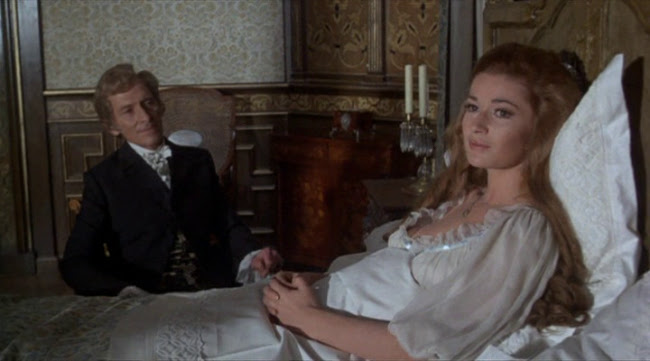 A young woman moves into her new husband's enormous ancestral estate and is almost immediately beset by a malevolent supernatural force. It's 1973's And Now the Screaming Starts, and it certainly does, and recurs at every opportunity. Despite the cheesy title, director Roy Ward Baker establishes a wonderfully effective gothic atmosphere in this film from Amicus. It's also a film with an argument about traditional class structures, presented as a dialogue with John Milton's masque Comus. It doesn't make a particularly profound argument but its presence helps bring a sense of personality to the supernatural menace. 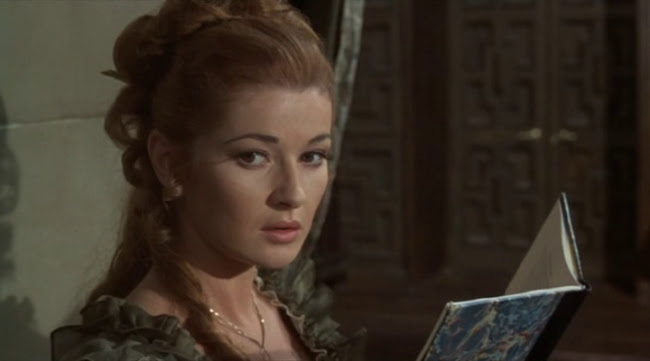 Peter Cushing, Herbert Lom, and Patrick Magee get top billing but most of the film centres on the young woman, Catherine, played by Stephanie Beacham--Cushing doesn't turn up until halfway through the film and Lom is mostly there only in portrait form, playing Sir Henry Fengriffin, the grandfather of Catherine's young husband, Charles Fengriffin (Ian Ogilvy). As she tries to figure out why she's seeing spectral hands reaching out of portraits and a leering face with its eyes gouged out peering at her through windows one might suppose this is a movie belonging to the gaslighting genre. Though if any of the phenomena she's witnessing are merely illusions meant to drive her mad, they're certainly very good illusions and don't explain why everyone else is terrified to talk about Charles' family history. 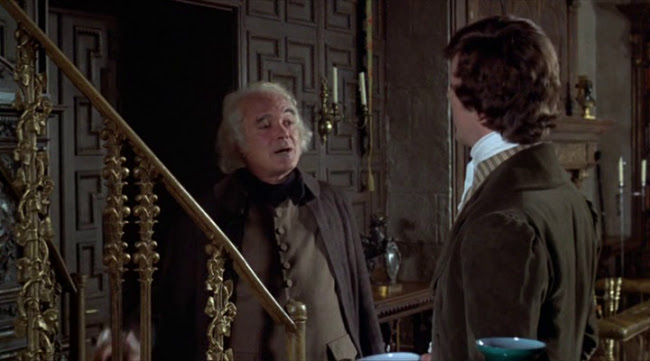 This includes Patrick Magee who finally shows up in a minor role as a doctor who attends to Catherine after she becomes pregnant. When things get too weird for he or Charles to handle, Magee sends for an expert, much like Van Helsing was sent for in Dracula, and accordingly Peter Cushing shows up playing a sort of proto-psychologist named Dr. Pope. 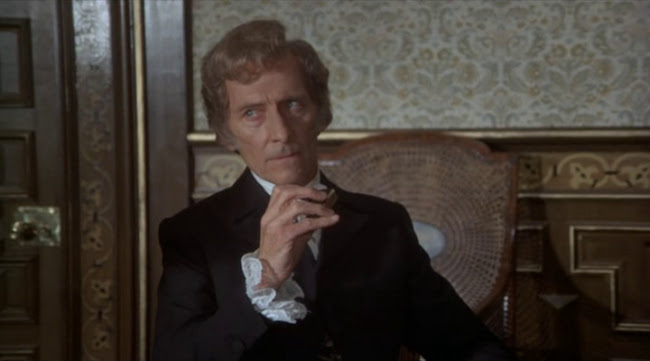 As the film's set in the 18th century I wondered if maybe Cushing's character was named for Alexander Pope but there's nothing in his personality to suggest it, being much a straight forward detective character, Van Helsing without belief in the supernatural. Cushing's good as always, leaning back in his chair playing with a snuff box, pondering as Catherine tells him her troubles. It's a literary giant of the 17th century the film explicitly references; John Milton, whose 1634 masque, Comus, Catherine is shown reading, the camera deliberately focusing on the title though it's never discussed in dialogue. 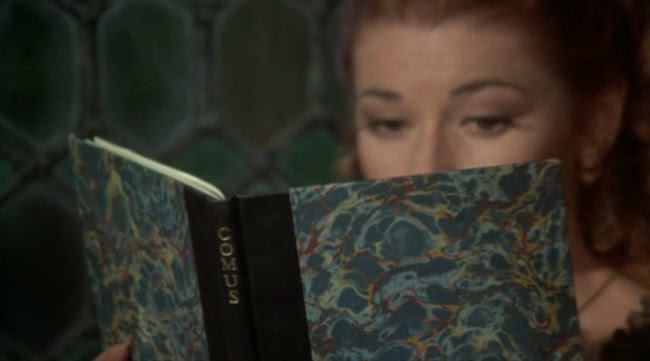 Any confusion as to whether or not this is Milton's Comus and not some other work about the being from Greek myth is cleared up when Charles later checks what Catherine's been reading and scoffs bitterly at this passage: 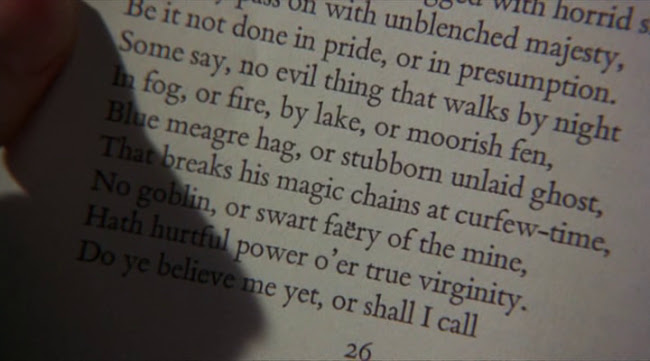 Comus was originally called A Masque Presented at Ludlow Castle, a masque being a sort of play typically presented in a court setting where the players are in a sense the audience. Comus is about three noble siblings, two men and a "Lady", who become separated in the woods. The Lady encounters Comus, described in the masque as the son of Circe, who endeavours to seduce her. The passage above is a quote from one of the brothers as he tries to think of reasons their sister is probably perfectly fine, wherever she is. These guys prove not to be the sharpest tools in the shed.

It's thought that the masque was partly intended to indirectly bolster the reputation of the Earl of Bridgewater and his family, the residents of Ludlow castle (some of them participated in the masque), as a countermeasure to the scandal surrounding a family relation who'd been tried and executed for rape and sodomy. 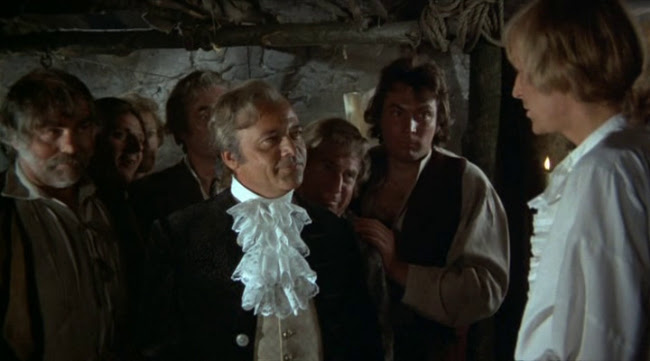 This becomes relevant in And Now the Screaming Starts once we get a proper flashback of Herbert Lom's character and just what he'd gotten up to that brought on the curse Catherine's now suffering from. Milton may have sympathised with the film's indictment of an abusive and debauched hereditary authority but the plot's a little broad to be worthy of Milton. As a horror film, it whittles things down to a pretty bleak proposition and there's something generally insubstantial about it. But it has plenty of that Amicus/Hammer atmosphere that makes you just want to live in this place for a while. If only Cushing and Magee had more screen time and some better dialogue.