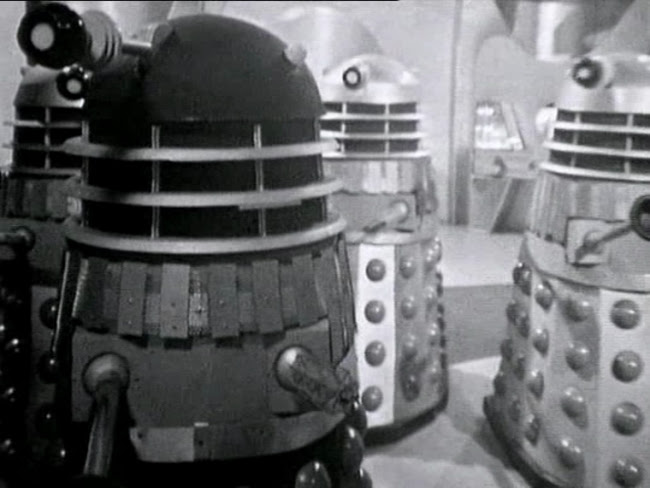 Still in the mood for Dalek episodes of Doctor Who, I stumbled across something else BritBox lacks in its collection of streaming episodes when I watched the First Doctor 1965 serial The Chase last week--the clip of The Beatles from Top of the Pops. This appears not to be an error like the missing footage from Revelation of the Daleks but something to do with a licensing disagreement for U.S. distribution. 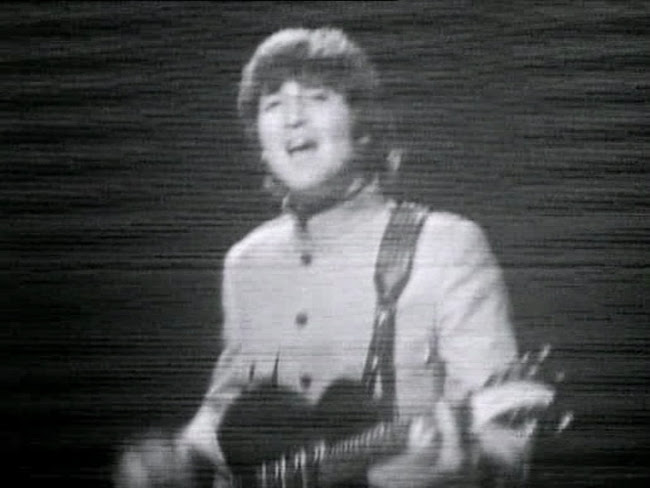 Again, I was forced back to my old copy of a serial. It's particularly a shame because this is apparently the only surviving footage of The Beatles on Top of the Pops. Supposedly The Beatles were actually supposed to guest star on Doctor Who but their management disliked the idea. Instead, the Doctor (William Hartnell), Ian (William Russell), Barbara (Jacqueline Hill), and Vicki (Maureen O'Brien), watch a Top of the Pops performance on the Doctor's new Time-Space Visualiser, a device that allows one to view any moment in any point in time and space. Good thing this never fell into the wrong hands. 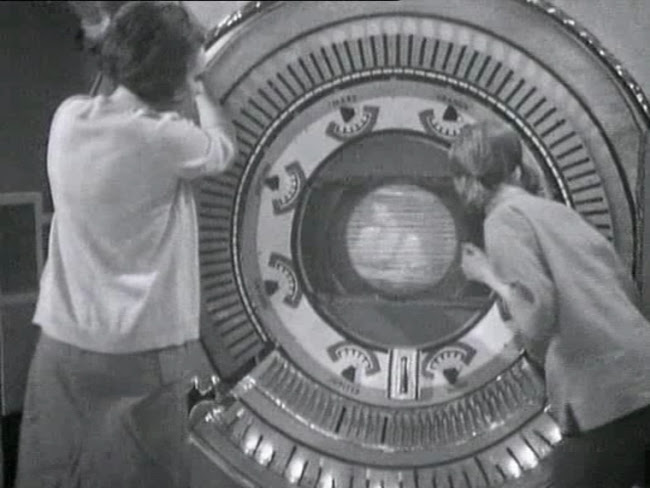 At Ian's request, they also watch a bit of Abraham Lincoln giving the Gettysburg Address and on Barbara's request they view a meeting between Queen Elizabeth I (Vivienne Bennett) and William Shakespeare (Hugh Walters). 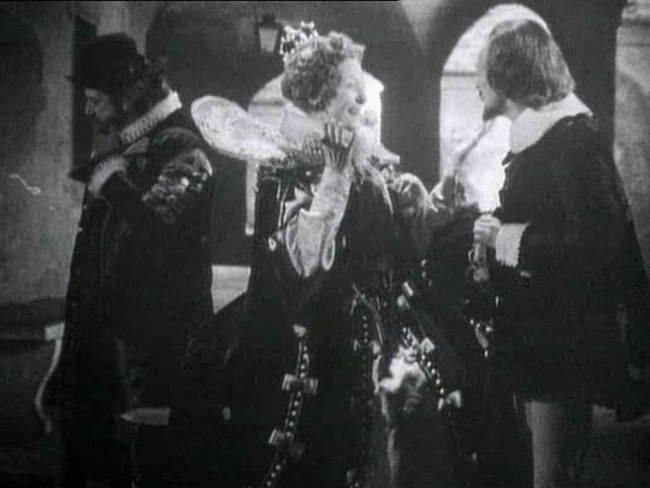 Their discussion about Falstaff incorporates two stories that actually have legitimacy among Shakespeare scholars--Falstaff was supposedly based, at least in part, on John Oldcastle, a fifteenth century sort of proto-Protestant called a Lollard. I always found this a little odd since Falstaff in the plays doesn't seem like a man of great religious conviction, heretical or otherwise. I doubt Queen Elizabeth was as amused by a shot being taken at Oldcastle, in any case, as she is shown to be in the clip on the Time-Space Visualiser. She went to a lot of trouble converting the country back to Protestantism after her Catholic predecessor, Queen Mary. Elizabeth's complicated relationship with Oldcastle's descendent, Sir William Brooke, also doesn't suggest she'd react as she's portrayed on the show. But her request that Shakespeare write a play about Falstaff falling in love, which eventually became The Merry Wives of Windsor, is a real story from the period and may be true. 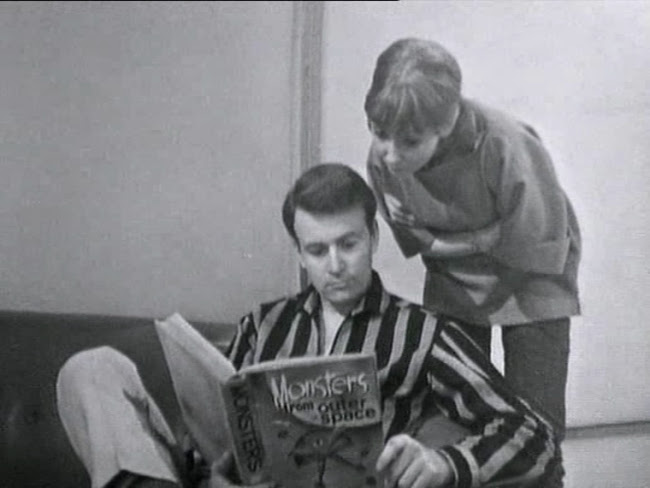 Each episode of the six part serial, The Chase, feels very different, almost like standalone stories but roughly connected by the Daleks chasing the TARDIS through time and space in their own newly developed time machine. My favourite is the first episode. In addition to the clips on the Time-Space Visualiser, I love the group casually exploring a really eerie desert planet with bizarre, blackened, as though burnt, objects dotting the landscape. 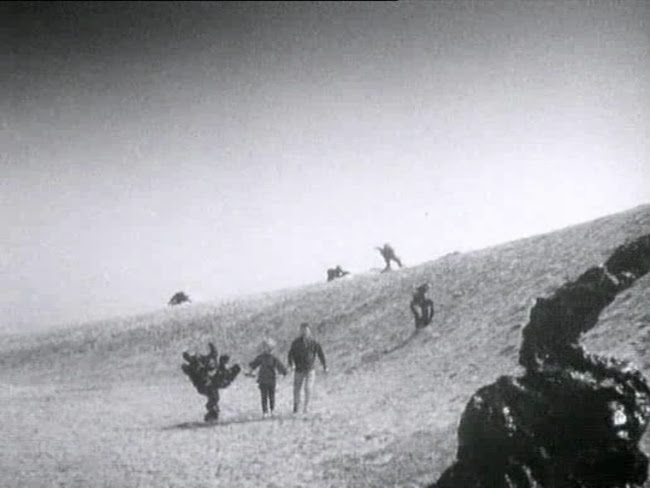 Ian and Vicki recklessly just strike out in a random direction while the Doctor and Barbara decide to sunbathe. They're all so sweet and innocent. I also love the grouchy Dalek slowly emerging from under a pile of sand at the conclusion of the episode. 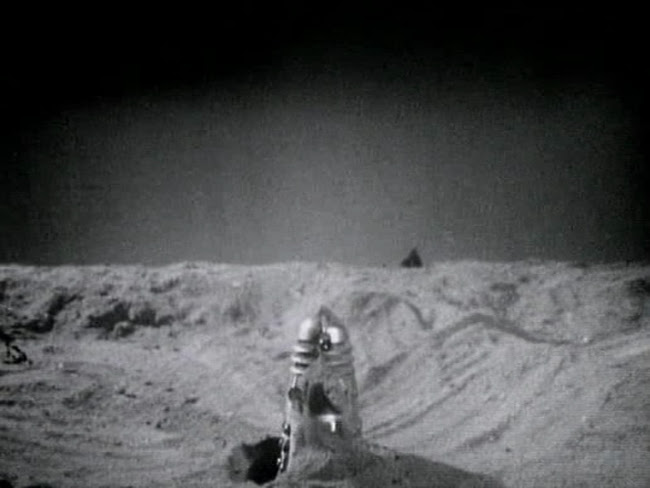 Posted by Setsuled at 9:50 AM
Email ThisBlogThis!Share to TwitterShare to FacebookShare to Pinterest
Labels: doctor who, elizabeth i, falstaff, sci fi, science fiction, television, the beatles, tv show, william shakespeare