We Don't Have No Education 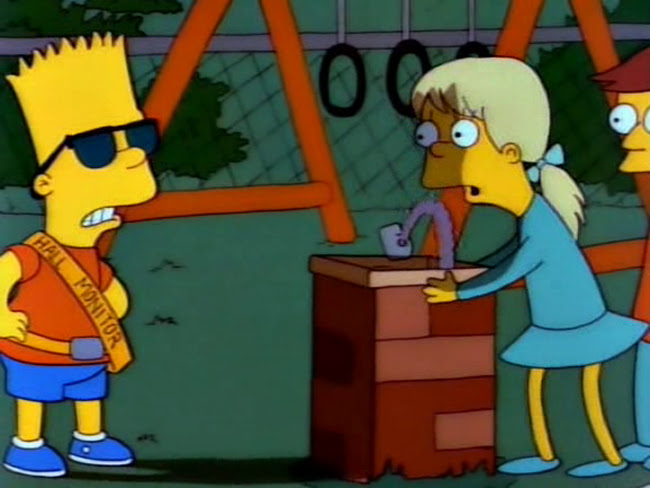 The story of the underachieving delinquent who becomes a cruel despot is all too familiar. It was a life path that accelerated temporarily for Bart Simpson in the 1992 Simpsons episode "Separate Vocations" in which a career aptitude test pegs Bart as a future cop and Lisa as a homemaker, suggestions that have profound and destructive effects on both of them.

Written by George Meyer, this episode swings the show back into drawing comedy from insight into human behaviour after the absurdism of the previous episode, "Homer at the Bat". The episode preceding "Homer at the Bat" focused on Bart and Lisa's school with a plot centred on Bart's teacher, Mrs. Krabappel. Like "Separate Vocations", it also drew humour from human insight but differs in that "Bart the Lover" is more sympathetic to the teacher. "Separate Vocations" is in part a merciless lampoon of high school teachers that has some painful accuracy. 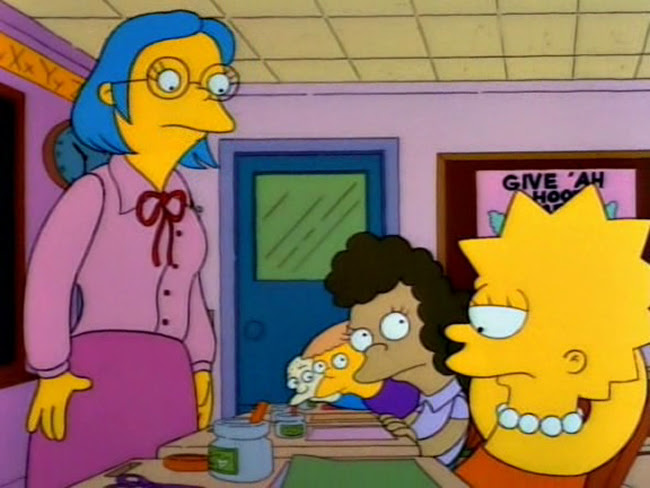 The Wikipedia entry for the episode has an analysis section that talks about how this episode exemplifies the show's persistently critical view of authority, citing a few books that have studied The Simpsons;

Daspit and Weaver write that it is "the absolute power that teachers have over students' every action that allows for the image to be presented on The Simpsons. It would be comforting to tell ourselves that this is simply parody run amok, that the writers are stretching reality to make a point, but the discussants in the study [of The Simpsons in this book] had memories of a reality very much like the one presented in this program." One of the discussants said she believes everyone has experienced similar situations in their school years, and she thinks the thought that "an educator could ever do something so useless and pointless with the children's time" is "frightening".

I think "frightening" is overstating it. We're not quite in the territory of The Smiths' "Headmaster Ritual" or even Pink Floyd's "Another Brick in the Wall" but when Lisa steals the teacher's edition text books and everyone panics, or when Lisa's teacher bitterly complains about how her master's degree should have secured a better job for her than what she calls "daycare", I can certainly remember a few of the high school teachers I had in the '90s. When I saw "Separate Vocations" as a teenager, it was satisfying seeing confirmed what I'd always suspected. But, having now had some limited experience tutoring college students, I can see the other side somewhat. Some people really weren't meant to be teachers but ended up there anyway and unfortunately the kids suffer as a result, but at the same time there are students who are always looking for an excuse to disregard the teacher's claim to any authority. When I don't know the answer to something, I prefer to be open about it and explore the solution with the student but for some students the basis of trust is so tenuous, and the enforced exercise of education so unwelcome, that they'll take any error as good enough reason to close themselves off entirely. So the teachers in Bart's school being paralysed by the absence of the teacher's edition books is only a bit on the unreasonable side. 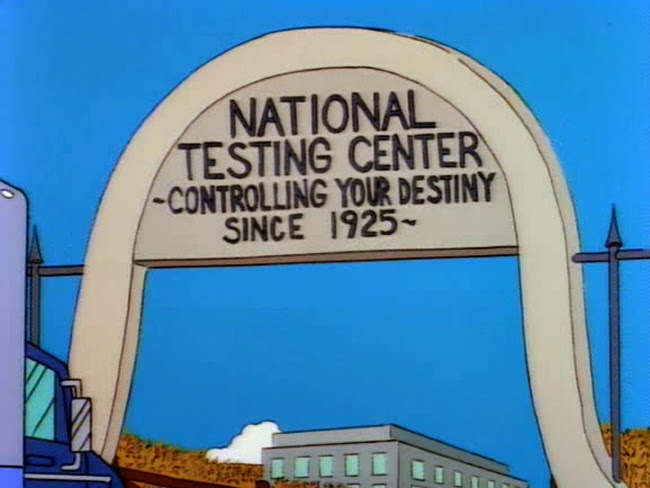 I have no sympathy for the aptitude test, though. I can't imagine such things still have much currency though they do kind of remind me of many internet memes and quizzes. I guess it's human nature to be forever uncomfortable with not knowing about the future. This is another episode, like "Bart the Lover", where Bart shows a surprising maturity for the climax, which makes the climax truly satisfying. It's like the end of The Man Who Shot Liberty Valance--he has a moment where he can see outside of himself, the character he is, and recognises it's probably more important that Lisa be instilled with confidence in her abilities than for him to be. It's a nice moment in a good episode.

Posted by Setsuled at 4:43 PM
Email ThisBlogThis!Share to TwitterShare to FacebookShare to Pinterest
Labels: school, television, the simpsons, tv show