Grey City and the Countryside 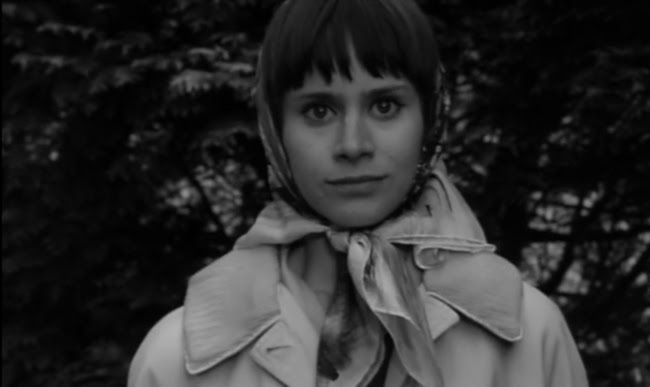 An ordinary, bookish girl from the country moves to Dublin and falls for a man twice her age in 1964's Girl with Green Eyes. Not quite as bold as some of the other kitchen sink dramas of the time, it does have some very good performances from Rita Tushingham and Peter Finch. Its screenplay by Edna O'Brien is imbued with some real insight into the trajectory of certain kinds of relationships. There's also some great location footage of Ireland in the 60s. 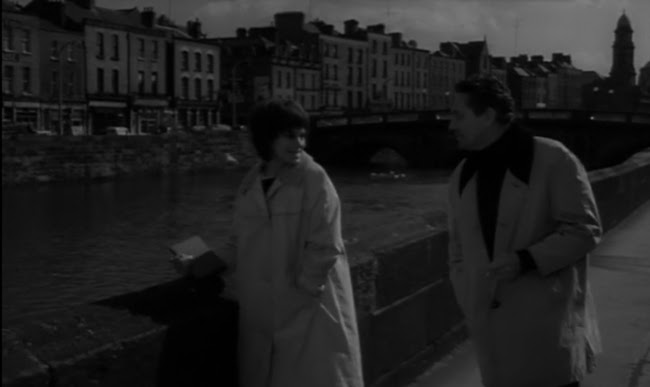 After Lolita, there were several films that sought to continue the examination of relationships between older men and much younger women--films like Georgy Girl and Age of Consent. In addition to being one of the few that doesn't star James Mason, Girl with Green Eyes is one of the least strident of such films, not really offering an argument for or against such relationships, but illustrating how important it is to consider the many other factors that might come into play. 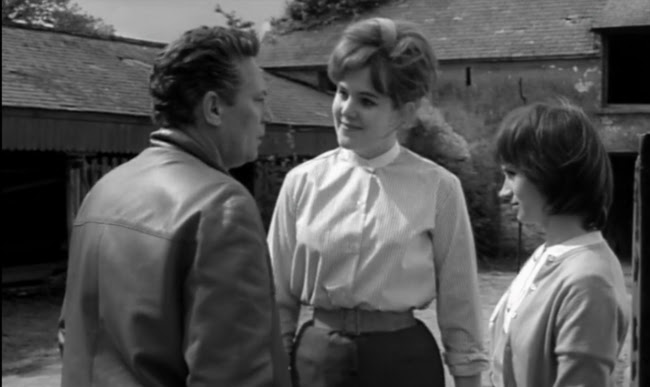 Kate (Tushingham) grew up on a farm in County Clare and then went to school in a convent, where she met her best friend, Baba (Lynn Redgrave). The two move to Dublin where Kate gets a job at a grocery store. The film does a nice job of credibly establishing Kate's social circle which includes a few rowdy young men already and the constantly chatty Baba, whose name may have been meant to evoke the word "babble". 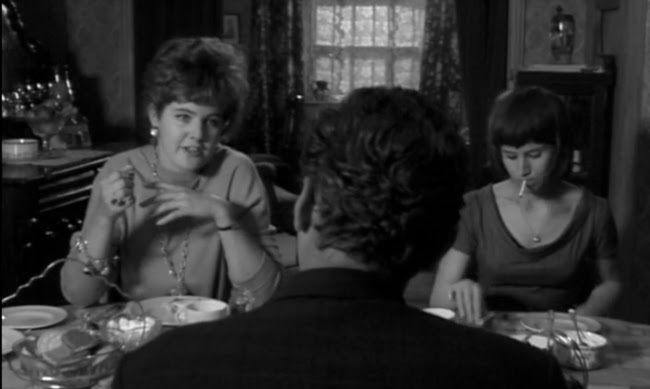 One of the scenes that shows off Dublin really nicely takes place in the middle of a busy street where one of Kate and Baba's male friends coaxes them into taking a ride in his car. He's on his way to deliver a dog to a large property outside town. It's here Kate and Baba meet Eugene (Peter Finch), a wealthy writer who owns the place, and who strolls in to accidentally catch Baba with her knickers down in order to piss. This is the first of several moments where the girls are awkward around Eugene. They're always terribly embarrassed and he's always perfectly calm. 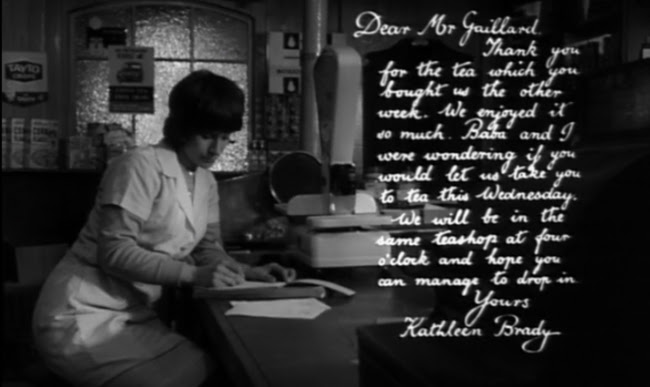 He takes them to tea but he quickly grows tired of Baba--but he's intrigued by the quiet Kate from the way she looks at his books. They start to see each other more; she wants to take things slow and he doesn't seem to mind at all--she because she's nervous about her first relationship with a man, he because age has dulled his passions. 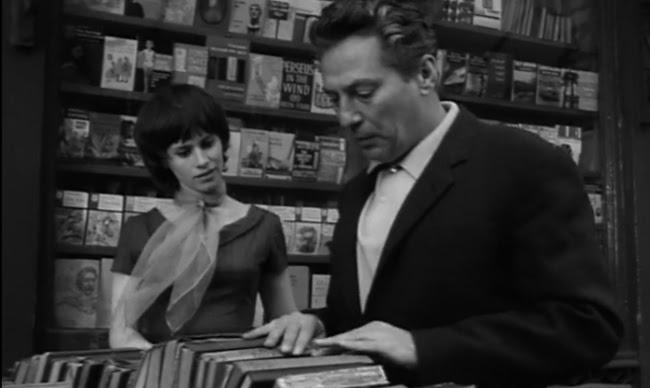 And that's the basic nature of their relationship throughout the film--she feels intensely and he's barely interested on more than a level of intellectual curiosity. The dynamic works for them sometimes while at other times it doesn't. When Eugene's intellectual friends visit, Kate's even more awkward as the reality of her simple hearted country upbringing is contrasted with the catty, ironic humour of Eugene's friends. Julian Glover appears in a small role as one of these friends, and it's painful to see him corner poor Kate in the kitchen while she tries to make tea. She has to deal with broken cups while trying to figure out how to take his mildly sadistic teasing.

"Oh, what a sweet little tray cloth." He says while buttering some bread. "Was it a wedding gift? I suppose you look on this as your honeymoon. '"Honeymoon": the time during which the bride believes the bridegroom's word of honour.' Quotation. H.R. Mencken, born 1880, editor, critic, biographer, lexicographer. Oh, and sadist." 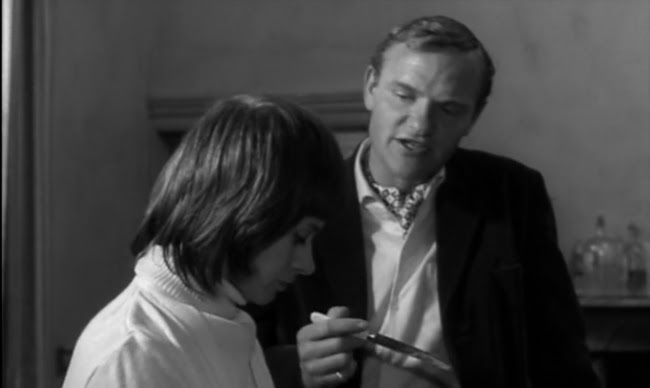 Kate recognises a quote from James Joyce earlier in the film but has to ask Eugene what "guile" means when he uses the word. She upsets her family and her own morality by entering a relationship with the married Eugene but she's troubled when he doesn't see the point of going to mass with her on Sundays. She's still figuring things out, her patchwork of experiences still coming together to form her conception of life while Eugene has settled in his. 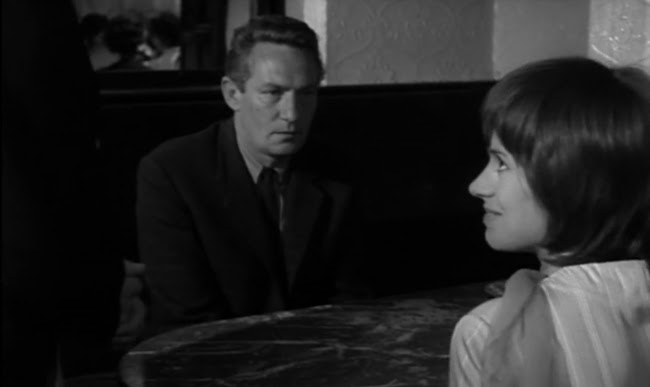 It's not quite the satire of Lolita or the more positive perspective of Age of Consent and Girl with Green Eyes doesn't have the big moments of those other films. But I quite liked the sort of quiet fade out from the film's climax which doesn't attach the sort of cosmic consequences even essentially secular movies want to moralise with. Life goes on and it's hard to say if it's better or worse than it otherwise may have been.

A fake potato's like a shapely foot.
A spot of moon is like a watching eye.
The coffee grounds are like a living soot.
The sun is like a burning pumpkin pie.
Approaching blobs again were glowing green.
A city sky perhaps will soon be live.
A million foot through glasses late were seen.
The carpet threads combined'll ever thrive.
The lashes lower like a million legs.
A walking train dispatched to bring some tea.
The ancient tide is rightfully the Hague's.
To England goes the channel's only key.
The water damaged wings were grey and black.
The wicker boat would sink at ev'ry tack.