I've almost finished restoring my computer to pre-virus condition. Though, of course, there are a lot of things that're just lost forever. On the other hand, I found a disk on which I apparently backed up all my mp3s last year, my old mp3 collection I had for years but haven't heard since last September. I suppose I mightn't have missed the disk last year if I'd have labelled it instead of drawing all over it; 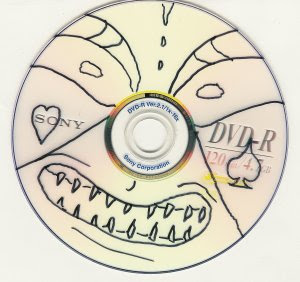 Sometimes my own sense of mischief really does work against me. I still need to get Microsoft Word from Tim, so I'm flying without spellcheck now. It's sort of libbarreightine.