My favourite quote of the week; "There are no atheists in foxholes, and there are no libertarians in financial crises."

Paul Krugman said it on Real Time with Bill Maher, and while I'm not sure I agree about there being no atheists in foxholes, Andrew Sullivan, a libertarian, nicely proved the latter point by later in the same episode of Real Time putting the bulk of the blame on people taking the loans they couldn't make good on. Sullivan's not a complete idiot, so I think we can blame this on ideological blindness. I mean, really, let's say everyone was capable of the individual thought required to know the bank's business better than the bank does and also has the guts to see past all of the other people taking out the loans. Let's say all these people got together for an evil plan, or let's say all these people are plain stupid and somehow that means they deserve to be homeless and destroyed. That still doesn't address the problem smacking the country in the face; these banks crumbling while a group of conmen go scot-free, profiting from the swindle. Gee, you think some regulation might have helped? Shall we build the dam instead of trusting the river to know flooding the city isn't ultimately in its own best interest?

Here's a screenshot from a chess game I played with Dragoness a couple nights ago where I managed to win without losing a single piece and only taking one of her pawns; 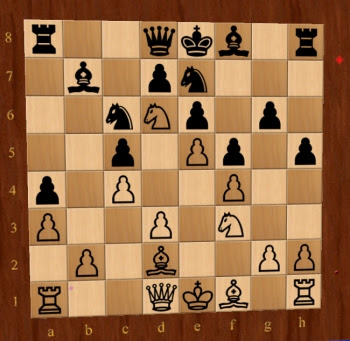 Because it seems like I need at least one picture for every post now. Well, really, what is the use of a blog without pictures or conversations?

Some family's coming to town and my schedule's going to be weird for the next week. Which is why I'm blogging at 4:21am . . .
Posted by Setsuled at 4:47 AM
Email ThisBlogThis!Share to TwitterShare to FacebookShare to Pinterest