Avast, ye talkers of piratonese! Ye're dogglin' the fibby wort popple! Yeah, I don't know how to talk like a pirate.

To-day I dreamt I was talking to Carrie Fisher about The Empire Strikes Back and she was insisting to me the ending didn't make sense. "Why didn't Vader go nuclear on Luke?" she asked.

I somehow couldn't remember the end of The Empire Strikes Back, and a scene came to mind of Luke being strapped to some nuclear device by Darth Vader. It was only after Fisher had gone that I remembered the movie actually made perfect sense.

I spent all day yesterday working on a single panel. By the way, in case anyone was wondering, Venia did get her dress from John William Waterhouse; 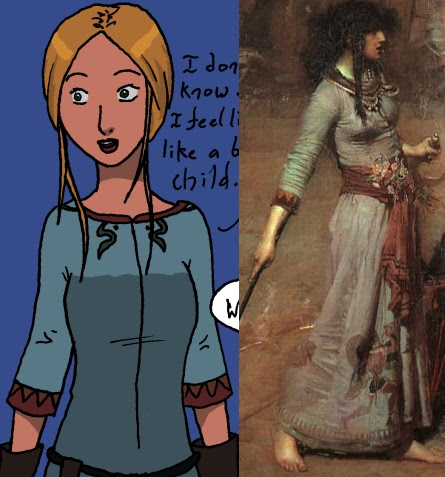 Though I made some modifications, obviously. So there's a bit of Victorian aesthetic influence on the comic. I wonder if there's a word for the hybrid of Victorian and Medieval aesthetics? Aside from the Pre-Raphaelites, The Lord of the Rings certainly contributes to the phenomenon.

Anyway, in case you missed the earlier post, there's a new Venia's Travels online to-day.
Posted by Setsuled at 7:07 PM
Email ThisBlogThis!Share to TwitterShare to FacebookShare to Pinterest