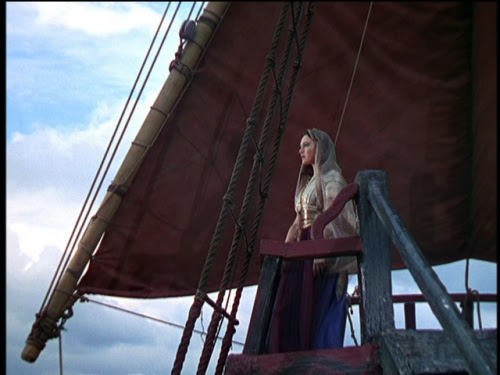 So, yes, The Thief of Bagdad is a gorgeous and wonderful film with five directors, one of whom was the great Michael Powell, and I didn't need Martin Scorsese in the commentary to tell me that at the opening sequence, a grand tracking shot through a crowded harbour beginning with an eye painted on a ship, was directed by Powell. The scene has his flair for layering of elements and other scenes bear his distinct talent for composing shots of colourful foreground objects and soft, angled shadows on minimalist backgrounds.

I listened to the Francis Ford Coppola and Martin Scorsese commentary while inking and colouring yesterday, and I was disappointed to find that it was two commentaries spliced together in one. I always wonder if the separate participants know their contribution is going to be edited this way. But it did add an interesting aspect to those comments from the two men that were related. Coppola comes off as slightly mushier than Scorsese, unabashedly passionate in his praise for the film, and even singing along with child actor, Sabu, the star of the film, as he sings about wanting to be a sailor. Later, as Scorsese talked about Spielberg and Lucas and a number of other modern, great directors and their mutual love for this movie, he said, "Francis had his--absolutely mad about the film. And he sings the song all the time, 'I want to be a sailor'." Coppola has this deep, plodding voice, so it's a bit like hearing the Frankenstein monster sing this child's song, all the more charming because he seems to enjoy it so thoroughly.

Both directors had a great deal of praise for Sabu, whom I'd heard Scorsese refer to as his favourite actor of the 1940s in the Black Narcissus commentary. The kid's certainly an oddity, as is any non-Caucasian actor in a Western film of the period who's allowed to act, well, human. But as Scorsese remarks at one point, there's more to it than that, as Sabu's performance seems to come from a very different and more naturalistic place than the performances of most of the other actors. The child was discovered by a documentary filmmaker when he was making a living as an elephant driver, which may account for the fact that Sabu is by far more muscular than the film's lead, John Justin; 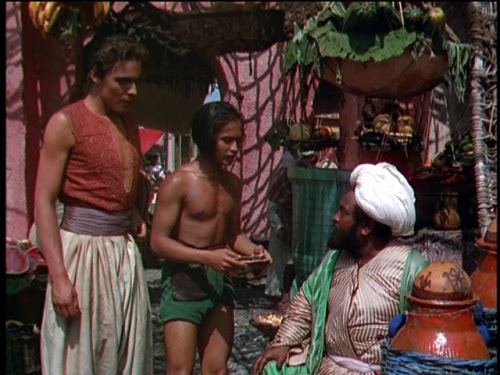 Coppola remarks on Justin's skinniness as having seemed strange to him when he saw the movie as a child in the 40s. I found it to be downright disturbing, since, as we're supposed to take Sabu as a scrappy youngster, it makes Justin seem malnourished and sickly to me, and that big blue vein popping out of his right arm doesn't help. It's a rare bit of billing justice that Sabu and Conrad Veidt were billed above Justin.

Veidt also drew a lot of praise from both directors, Coppola saying that the only autographed photo of an actor he has is one of Veidt's. And Veidt's character, Jaffar, the film's villain, is discussed at length by the two directors, Coppola drawing a comparison between him and Anton Walbrook's character in The Red Shoes, another Michael Powell film. A comparison I'd already been thinking about because Scorsese had mentioned Jaffar as being the primary reason he's still interested in the film--he'd said the same thing about Walbrook's Boris Lermontov in his commentary for The Red Shoes. 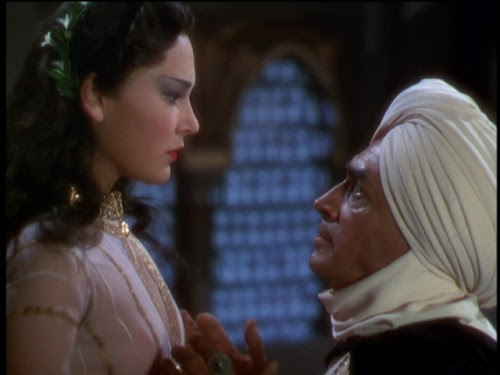 Both characters seem tormented by their inability to consummate relationships with the female leads of the respective pictures, and both are aloof sorcerers. As Scorsese says of Jaffar; "He can create so much and animate objects but ultimately, he can't change her heart. And this is one of the most interesting things that I think about the picture and the story and the way it's revealed, and that is that the most disturbing character is also the most vulnerable. And this vulnerability to me is always so surprising. It gives him a kind of um odd compassion. It makes his character, and Conrad Veidt's portrayal of him, something that becomes enriched every time you see the picture."

As Jaffar, seen from a sharp pan into a low angle shot of him raising his arms on a ship at sea, commands the weather with one, loud intonation, "Wind!" I thought the moment seemed familiar, and I realised Coppola had given it to Gary Oldman in his Dracula movie. Coppola doesn't mention this in the commentary, in fact his comments on Jaffar are along lines similar to Scorsese's, as he says, during a scene of Jaffar's attempted seduction of the female lead, "But of course she can't give herself to him the way he wants her because he wants her to truly love him. And he can't have her any other way, you know. Because he loves her so much and, you know, so the villain who is so powerful is caught up in some inexorable dramatic pattern."

It's not dissimilar to the underlying poetry of King Kong, made just seven years earlier, and I'm wondering now about the significance of what may have been a perpetual, subliminal theme in movies of the 30s and 40s. I'm also reminded of Claude Rains' character in Alfred Hitchcock's Notorious.

I also found the two directors' comments regarding the toy obsessed Sultan to be interesting. Scorsese found the Sultan's compulsion to be deeply disturbing for the Sultan's apparent desire to dominant the things, while at the same time, Scorsese says, "the obsession with the toys reminds me of the obsession with cinema itself, the uh, the magic nature of the moving image in a way--The Magic Box--the British film that was made about the life of William Friese Greene, who was the inventor of cinema in England. But the nature of that obsession is so overwhelming and it's reflected in the joy with which this picture was made. But also in the fact that he can't help himself from having those toys, he must have those toys, he, and the way Michael always told me--Michael Powell--you can't help yourself but to make pictures. Sometimes to the detriment of many things, sometimes to the detriment of those around you."

Which reminds me again of Lermontov, who sought to ignore human nature for a total devotion to art. Yet my most recent viewing of The Red Shoes had me wondering more how successfully Lermontov had avoided human nature, or whether his desire for Vicky may have been a transmutation of human nature. That perhaps the impresario had so completely funnelled his passions through his art that they were inevitably expressed on that avenue.

Coppola, meanwhile, was only charmed by the Sultan's obsession for toys; "You know, I look at this sequence and this King and all these toys and I think how perfectly, how exactly this story fits what I'm like and what I love and what I'm interested in, these mechanical toys and the romance of the era and then I realise, well, is it that it's so much the way I'm like or did it make me be the way I am? That I love these things because I saw this film?"

Coppola also spoke glowingly of Miklos Rozsa's score, repeating the melodies from heart in much the way people of my generation remember themes from Star Wars or The Godfather, which got me thinking whether Star Wars happens to fit my personality, or if my personality is as it is because of Star Wars. And knowing The Thief of Bagdad similarly influenced Lucas, it gets me thinking about the great chain of myth in the human subconscious. Something Scorsese addresses in the commentary by way of Michael Powell's addressing of the concept;

"The world of the fairytale creates its own time and its own space, has its own laws and has its own logic which is dreamlike. There's a genie that's been imprisoned for two thousand years, and there's elders that are survivors of some ancient, long forgotten golden age which, particularly when they talk about the purity of heart of the child taps into a kind of ancient myth or a kind of subconscious that exists through culture and time over the years. With that in mind, one accepts these elements in the picture, one can travel up to the roof of the world or over the Grand Canyon or anywhere, the film just takes you. In a sense, the story itself doesn't have to be rational, it seems irrational but the events in the story unfold or come about with a logic that's very strong, but within a magical framework. And that logic is so compelling that the supernatural events in the film don't seem to surprise anybody, it's the world they're in, it's all taken for granted. And it's never questioned. So if the rule is something that is fantastic, rather than the fantastic being an exception, to reality, then the boundaries don't exist anymore between the real and the imaginary and the physical and the mental. There's a total freedom to dream in this fairytale world. Objects, inanimate objects, respond to command, come to life, flying carpets, horses, the statue, the silver maid, which murders the sultan, and even roses that can, uh, their fragrance creates amnesia. So in a world like this, the wildest notions can be achieved with the right fetish, the right talisman.

"But this is something that Michael Powell actually wrote in his autobiography that applies to this sense of pushing the limits and having the audience accept the style, accept the world that the filmmakers are trying to create. But this is a quote from Michael, 'We need you to bring your sense of imagination, suspend your sense of disbelief so that you can help us succeed in [synectic?] effect on you in a way. To be open minded, to bring some of yourself, some of your own sense of wonder and delight if you can to the imagery in the films.'" 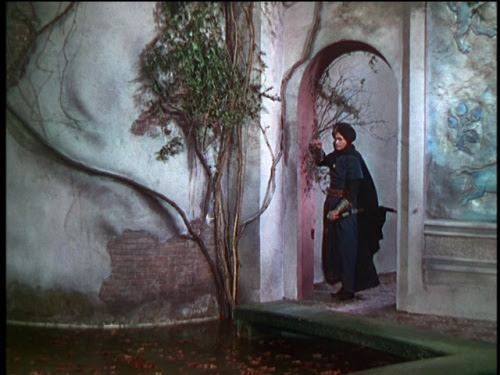 Posted by Setsuled at 11:55 PM
Email ThisBlogThis!Share to TwitterShare to FacebookShare to Pinterest