Depth and Quality of Illusion 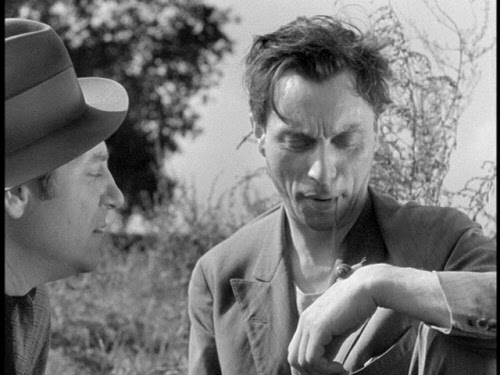 I guess because I was in a Jean Renoir mood last night, I watched his 1936 adaptation of Maxim Gorky's The Lower Depths. Criterion packaged it with Akira Kurosawa's adaptation of the play, inviting the viewer to compare the two films in an interesting little marketing strategy. Of course, I was mostly interested in the Kurosawa film (which I wrote about back in May), but I like Renoir okay. I've only seen two other movies by him, The Rules of the Game, which I really liked, and The Woman on the Beach, which I thought was a decent film noir, though not one I'd place among the greats.

His version of The Lower Depths is a completely different story than Kurosawa's and, I would say, much inferior. Renoir himself, apparently, shared this opinion, as, according to this essay included with the Criterion DVD set, Renoir said of the Kurosawa film, "That is a much more important film than mine."

It's amazing to note, then, that Renoir's script had Gorky's seal of approval, particularly since it deviates so wildly from the source material. Gorky died long before Kurosawa's 1957 extremely faithful adaptation and it would be interesting to know which he'd have preferred.

Maybe he simply read Renoir's script from the standpoint of whether or not it would be a good movie, for it certainly isn't bad. But wildly different--it's like a different person wearing clothes woven from thin scraps pulled from the original play. The first hour and fourteen minutes deal with the Baron's fall from grace--the Samurai in the Kurosawa film, who was a minor character who only may have actually had the prestigious social position he claims to have had. In Renoir's film, the question is obliterated, one of many instances where the question about the value of illusion and reality is diminished or avoided. It's not totally absent, but not only is it less prevalent, at times an almost opposite viewpoint is expressed.

In the Kurosawa film, one finally reaches the conclusion that delusion is necessary for the poor to survive but that it was destructive at the same time. In the Renoir film, such dreams are presented as the meaning of existence, and beneficial so long as they're seen for what they are--the difference is most plain in the death of the actor, who, in the Kurosawa film kills himself in an attempt to reach the heaven the monk had described to him, while in the Renoir film he kills himself after contemplating the fact that no-one remembers his stage name, that he's lost his persona. In the Kurosawa film, the dream kills, in the Renoir film, the absence of the dream kills.

But most of the Renoir film centres on the Baron and the thief, who are both presented as almost supernaturally calm and cool gentlemen. They're likeable just for being so cool and actually, since the female lead, as Renoir himself observed later, was totally ineffective, I found the film to be mostly concerned with a barely sub-textual romance between the two men. The beginning of the film, in contrast to the play and Kurosawa film, takes place almost entirely in the homes and clubs of the decadently rich, and perhaps one of the main problems with Renoir as a medium for the Gorky play is that Renoir plainly has no idea what it's like to be poor. The Baron's story about a man who finds his bliss after he's lost everything and finds he enjoys sleeping in the grass on a summer's day would be insulting if the actor and the character he plays weren't so charming. Of course, on those rare occasions when he delivers lines from the original Gorky plot, he seems to be a completely different person.

One of the best scenes in the film was saved, many people believe, by the improvised addition of a snail--the Baron and the thief lying in the grass together discuss the different uniforms and roles they've adopted through life, which sort of touches on the theme of illusion and reality, but the whole time we're watching the snail on the Baron's hand, which plays off the charm of the actors by adding a slight carnal tinge. 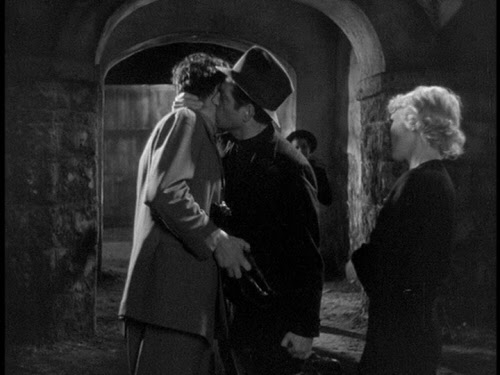 Before the thief leaves with the Natasha, the woman he's in love with according to the dialogue, he kisses the Baron. It's only on the cheek, but it's done far more passionately than any of his interactions with Natasha.

The thief in the Kurosawa film was a live wire, a yakuza trying desperately to convince the young woman, frightened of the world, to share his dream of the two of them together and surviving as a couple in the world. Her skating on the edge of accepting that dream or running from it was one of the things that made the Kurosawa film incredibly beautiful.

The thief in the Renoir film is an elegant, easily confident man, somewhat reminiscent of Cary Grant's character in To Catch a Thief, sort of off-handedly pursuing a programmed relationship with a woman while mainly enjoying the time spent with the Baron, who's almost exactly like him.

So Renoir's film is a fun, slightly confused and subliminal romance, while the Kurosawa film is a real and unflinching glimpse into the inner workings of the human soul.
Posted by Setsuled at 8:32 PM
Email ThisBlogThis!Share to TwitterShare to FacebookShare to Pinterest