What Can't Happen in Places that Don't Exist

The giant squid are growing in number.
The pigeons have been dreaming about it.
In their high shopping mall, wide-eyed slumber.
They woo amateur models through the net. 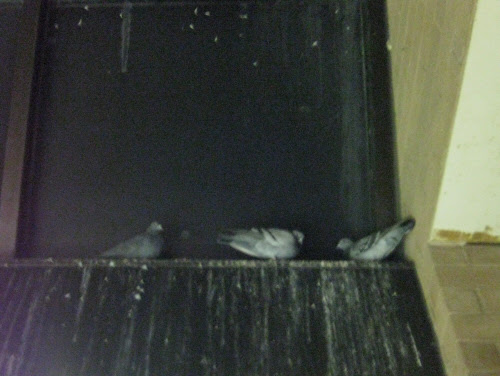 A picture I took of pigeons I found hidden at the mall, outside the JC Penney. There was a hokey try-out catwalk for aspiring models inside the mall last night. Maybe I shouldn't make fun--I'm sure it's possible I saw the Tyra Bankses and Elizabeth Hurleys of the future lined up for it. Is Tyra short for tyrannosaurus, do you suppose?

I was at the mall getting tea--not herbal tea, before you even ask. Pure, mean, caffeinated tea, the way the angry bull gods of the underworld intended. Though I guess just being at the mall, combined with the fact that I spent an hour playing World of Warcraft last night, would probably earn me enough demerits at Werner Herzog's school to make the tea question moot.

I've already pencilled, inked, and gotten halfway through colouring a page of comic to-day. Maybe I'll watch a movie when I'm done. I kind of wish I had last night instead of whiling away two hours with Second Life and WoW. I saw that Second Life's website has a couple recommended places to visit, so I visited a couple art and museum places. I visited a place that had sets based on famous paintings with poseballs to put your avatar in the painting. Most of them were nude paintings, oddly enough. The thing was set up so that you clicked on the painting you wanted on one floor and then you were teleported to the floor below where the set was generated. I clicked a black and white picture of John Travolta and Samuel L. Jackson in a scene from Pulp Fiction (you know, that famous painting) and was teleported to a street and bright red brick building facade that looked like Sesame Street. Two avatars were there, jumping around and talking to each other in gibberish, a non-descript woman and an astronaut in a space suit. They seemed to be trying to talk to me at one point, and I don't know if they were trying to fuck with me or if they were genuinely lost and confused and for some reason expected me to have the dialogue decoder they were using.

I finally got to the first episode of Angel to feature Fred (technically the second episode, but the first where she has a speaking part). It took way too long for her to show up. I hear in the official comics Ilyria gets some of Fred's memories at one point. I might have to check that out.

Boy, that girl got a raw deal. They find her as a slave in a demon dimension, and then she dies a couple years later and has her soul destroyed. I mean, that's gotta be a mindfuck for the Christian viewers. I can imagine the conversation; "Death is when God accepts your soul in heaven." "But what if the soul was destroyed?" "God would never let that happen." "I understand, but what if, for some reason, he did?" "He wouldn't, though, it's a pointless conversation." "But I'm asking you to imagine." "But it wouldn't happen." "I understand, but . . ." And so on. You can tell I've talked to some zealots in my time, can't you?
Posted by Setsuled at 9:10 PM
Email ThisBlogThis!Share to TwitterShare to FacebookShare to Pinterest