Exclamation marks are never the point.
A day's barely placated by green tea.
New barons of Twitter we must anoint.
Templar Celeborn is no Roy Batty.
Health's a luxury in America.
So's always taking a taxi to lunch.
Girl once knew her name was Veronica.
Alas, scientific progress goes "crunch".
Fashion's a game for the newest gadgets.
Some cats require a camera to talk.
Papers are beset by bandit inkjets.
Histories of popcorn are lost in a wok.
Time travellers are aggressive hagglers.
Catwomen are discreet, honest burglars.

I was extremely impressed by the new Haruhi Suzumiya to-day, the last in this odd sort of second season, coming after a few episodes that had felt somewhat superfluous. What this episode did was to play with the idea of different realities created by perception and the value of those realities. 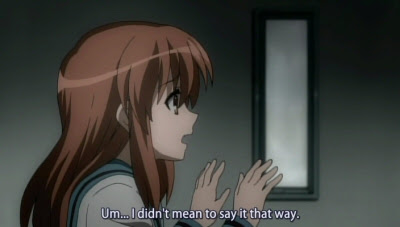 The first key moment, for me, was Mikuru's discussion with Kyon about Koizumi's assertion that Haruhi is God and unconsciously controlling and creating the universe. Mikuru, the time traveller from the future, tells Kyon in an extremely passive aggressive way that not only does she disagree with Koizumi, but she vehemently distrusts him. The way she speaks to Kyon is almost like a finagling geisha, who wishes to issue a demand to her patron without going to the vulgar length of actually stating the demand. Following this scene is one where Koizumi gently suggests that the frail, delicate creature Mikuru has appeared to be up to now has been merely a pose designed to manipulate Kyon. There's a wonderful moment where Kyon accuses Koizumi of telling a bad joke and Koizumi apologises and says, "It seems I don't know how to make jokes work," quite shrewdly figuring it doesn't matter whether Kyon vocally accepts what he's saying, only that he's heard him. He's created a reality of perception in Kyon's head whether Kyon likes it or not. 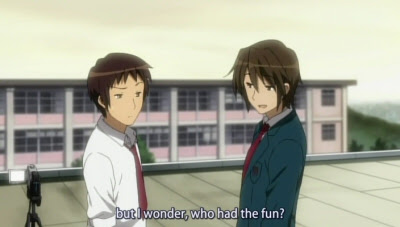 It's so shrewd, in fact, we're compelled to contemplate the possibility that Koizumi's the manipulator. The beauty of this subtle ideological conflict is also in Mikuru's existence as a perfect shonen damsel character--I've often been amazed at how anime fans either wilfully ignore, or are simply oblivious to, the fact that they are being manipulated. That the female flesh and subservient attitudes of girls in so many anime series are specifically calculated to indulge the fantasies of a male audience. But this comes with the territory that most people are ignorant of the extent to which art manipulates them--people who assume there's no significant difference in experiencing a movie while people in the room are talking, whether or not the movie's dubbed or subtitled, or in widescreen or pan-and-scan. 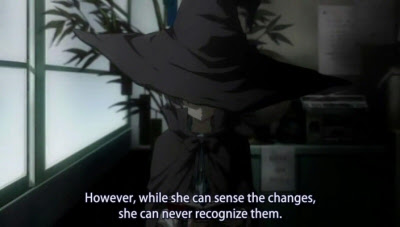 It could be years before there's another new episode, but as the series stands now with these additional episodes, it's an even more fascinating story of relationship psychology told with mechanisms of science fiction. It is, quite simply, what science fiction ought to be. 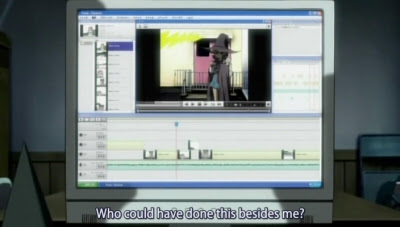 Posted by Setsuled at 7:47 PM
Email ThisBlogThis!Share to TwitterShare to FacebookShare to Pinterest