The Sounds You're Permitted to Hear

Music by Wojiech Kilar from the soundtrack to Bram Stoker's Dracula. I originally used some music from the first season Twin Peaks soundtrack, but YouTube disabled the audio before I'd even finished uploading it, as apparently it's owned by Warner Brothers. Wow. I mean, it was an excerpt of a song, it didn't even start at the beginning, but somehow YouTube has a mechanism that was able to recognise music from a soundtrack released in the early 90s from that much. Fortunately, it looks like the Dracula soundtrack's been out of print for a while except as part of a compilation of Wojciech Kilar and it looks like that compilation is put out by a group that's not a bunch of dipshits.

And, because I woke in the middle of the day and decided to tweet before falling back to sleep, it's already time for;

There's always room for penniless barons.
Sometimes there's no room for English muffins.
Memory fey are far from their warrens.
Hard peas rattling safely in their coffins.
There's never a ghoul here when you need one.
Consummate cowards are without limits.
Upon zombie resurrection they run.
Into fast centuries they turn minutes.
All my online friends look like Lily Cole.
I don't wake up when I wake up early.
Your tongue key can plunder a pirate's soul.
Old batteries make sailors so surly.
Your power's in potatoes and lemons.
Give your period piece to Jean Simmons.

It was actually only Moira I dreamt had posted a bunch of pictures of herself that revealed she looked exactly like Lily Cole.

Last night I watched "Dead End", which wasn't one of the better episodes of Angel, but I still greatly prefer the basic high stakes feel of the show compared to Buffy. Although, the previous episode, "Disharmony", is one of my favourites for being an exceptionally good comedy episode. I don't normally dig the sitcom humour, except it seems perfectly plausible in this case--Cordelia hanging out with vampire Harmony makes sense when you realise Harmony was shallow and obnoxious before she was a vampire, and talking to her allows Cordelia to take a break from her new, more serious perspective on life.

I guess this is my favourite era of Cordelia--she's not the irritating saint yet, and she's not the cruel popular girl anymore either, though her moments of "truth-teller" in that first incarnation occasionally reached highs her character never achieved again.

The episode actually plays around with the somewhat murky definition of the "soul" that the two Buffy shows kind of stepped into. I realised that the only difference it seems to make is that people without souls in the Buffy-verse don't mind when people they don't know die. Which, oddly, is what makes Spike such a sympathetic character--he only cares about the people we care about. It makes him actually more sympathetic than any of the characters with souls, as we all tend to see the lives of fictional characters as having value only in relation to how interesting they are.

I have still been watching Buffy, as this screenshot I took of Buffy and Giles wearing thick sweaters and suede jackets in the middle of a desert attests; 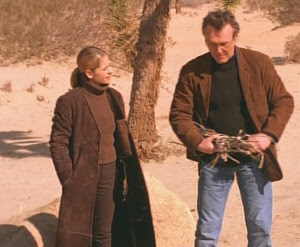 She was out there on a vision quest so maybe they figured delirium from heat stroke would speed things along.
Posted by Setsuled at 7:50 PM
Email ThisBlogThis!Share to TwitterShare to FacebookShare to Pinterest