The first hour or so of Gake no Ue no Ponyo is so good I was crying. Just looking at it made me impossibly happy. It was like a new Disney movie from the 1950s directed by Yasujiro Ozu. Which is not to say it's exactly like a production from either man, though I realised that Miyazaki is more truly an heir to both than anyone in America or Japan.

I think this is the most dreamlike Miyazaki movie, there's less of a clear distinction between the real world and the magic world, mainly because of its fantastic stylisation, my favourite example of which were the waves which were apparently animated by Miyazaki himself; 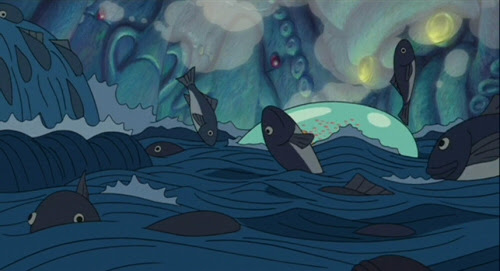 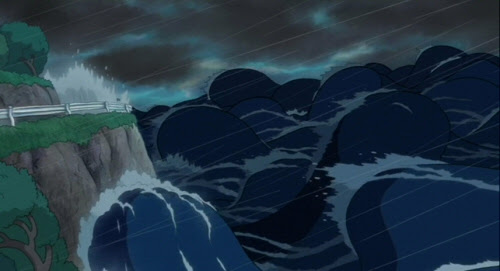 They look like waves in old Japanese paintings and yet they move like real water. In my favourite scene of the film, when Ponyo unlocks a great power hoarded by her mad scientist/sorcerer father, the water and the meticulously animated legions of ever present sea life seem to become one. Ponyo, whose father had named her Brunhilde, rides a massive tsunami composed of deep blue, enormous fish waves and Joe Hisaishi's score, especially with undulating, high strings in the background, sounds so close to Wagner's "Ride of the Valkyries" that one suspects Miyazaki only refrained from using the actual music because it's become too familiar.

The story is an interesting fusion of Hans Christian Andersen's The Little Mermaid and Richard Wagner's Die Walkure, but this may be the Miyazaki film with the least relevant plot. The characters are wonderfully alive, but they mainly seem to exist in this world just as an excuse to animate what Miyazaki wanted to animate. It's for this reason I found the first hour much better than the last forty minutes, though those last forty minutes are far greater than most movies out there right now. They contain, for one thing, a glorious sequence of prehistoric sea life roaming a flooded village as the children gaze at them from a small boat and recite their names. 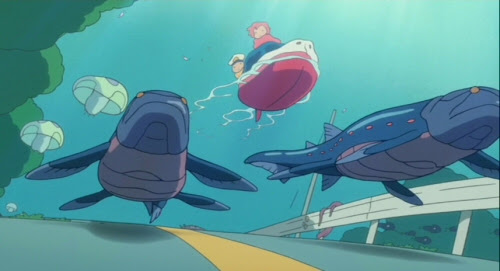 I watched the Japanese version, and it's hard for me to imagine Disney broodlings Noah Cyrus and Frankie Jonas delivered better performances than the actors Miyazaki picked out himself, but I might want to check this movie out on the big screen anyway. I recommend you do, too. Disney's certainly very unfortunately undersold this beautiful thing.

The giant squid are growing in number.
The pigeons have been dreaming about it.
In their high shopping mall, wide-eyed slumber.
They woo amateur models through the net.
Girls drawn by a solo singing goblin.
Most coffee places have useless hours.
Daytime caffeine is somehow so maudlin.
In sunlit aqueducts wine soon sours.
Honey's good to give a girl from the sea.
Or Valkyrie riding on hand-drawn wave.
Have at twelve an extra cup of green tea.
Better than you'd like sometimes clocks behave.
Brynhild didn't need to become human.
Link went to Hyrule to find elf women.

This spider sprang out from behind my computer last night;

The music is "Gouin ni Mai Yeah" from the Sayonara Zetsubo Sensei soundtrack by Hasegawa Tomoki.
Posted by Setsuled at 5:09 PM
Email ThisBlogThis!Share to TwitterShare to FacebookShare to Pinterest