A Long Time ago, in Israel 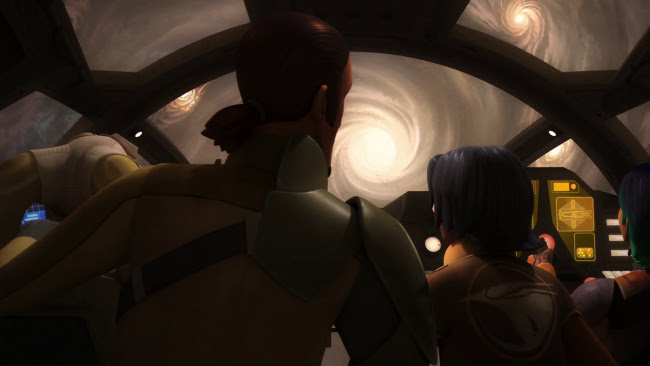 Hey, Kanan, you're blocking my view of the promised land. I know what you'll say; "I am the promised land!" Actually that maelstrom from last night's new episode of Star Wars: Rebels would be more like the River Jordan or maybe the Red Sea since the prophesied land for Zeb's people is the planet beyond it. Actually, the Red Sea definitely because Zeb parts it with his magic staff and two TIE Fighters are destroyed trying to follow them. The episode, "Legends of the Lasat", is interesting for a few reasons, among them the fact that it's the first non-finale or première episode to neither feature stunt casting or prominently feature some person or aspect of either the movies or the Clone Wars series. Well, except the pirate Hondo, but this is the closest the series has gotten to taking the training wheels off.

Written by Matt Michnovetz, who wrote the popular "Stealth Strike" episode earlier this season, the episode features none of the Rebel forces apart from the Ghost crew so feels slightly like a return to the series concept. They encounter a couple refugees from Zeb's homeworld who are looking for a promised land foretold by their religion. 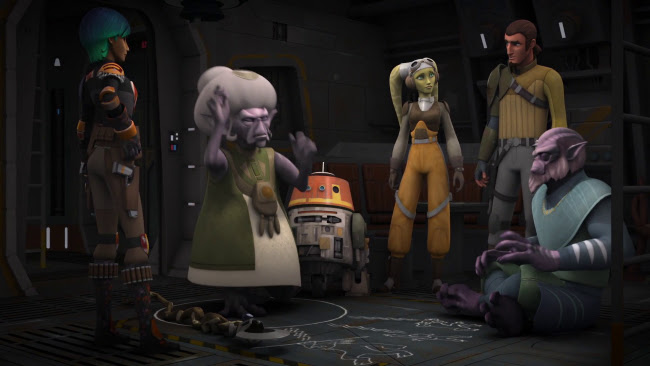 When they describe their deity as something which exists everywhere in the galaxy, Ezra says, "That sounds like the Force!" Kanan informs Ezra there are many names for the Force in different cultures throughout the galaxy. George Lucas has said in interviews he modelled the Force and aspects of the Jedi religion on the commonalities in various mythologies but in neither the movies or the Clone Wars series did we have a situation like this where another religion worshipped the same thing under a different name. It seems like a natural enough idea, though perhaps Lucas thought it would be redundant or wouldn't make sense for there to be alternate names for the thing in the language that English stands in for. In any case, I've been wondering since the series premièred why the two protagonists of Rebels have those Old Testament names, Kanan and Ezra. I can't help wonder if this is part of some long range, master plan.

What if in Disney's Star Wars, Rebels and maybe Rogue One are to be the Old Testament while the sequel trilogy is the New Testament? Perhaps they're setting Rey up as a Christ figure. This would explain why she's more powerful and serene than Luke and also why Rey seems less sexual than the original trilogy characters. If this is true, maybe in the next movies Luke will start to seem a bit like John the Baptist and Rey will be killed only to be dramatically resurrected to redeem Kylo Ren.

Every time I think I'm done talking about Star Wars they pull me back in!