Getting internet at my new apartment is an ongoing drama. I slept there the first time on Thursday night, on the floor, after moving things until 2am. I got up at 7:30am so I could meet the cable guy who told me my modem was no good because it was under a different name in Cox's database. So I bought a new modem and made another appointment for Monday. An older man and a young trainee came this time. After hooking everything up, I saw a message from Facebook pop up in the lower right hand corner. "Looks like it's online!" I said.

Reluctantly, the older man opened the web browser and my home page, a random Wikipedia entry, popped up. It wasn't even 10am yet, I was happy to have a little honeymoon with the internet before I had to be off to school. But the cable guy wasn't satisfied, saying something vague about how he had to go downstairs and check the splitter and then I'd "really be cookin'!" So my modem went offline.

Whatever he did, when the modem came back to life it started an endless series of reboots. While the older man was downstairs, I asked the trainee, "So what exactly was wrong with it before?"

He mumbled something about how if the modem didn't hit certain levels they weren't allowed to leave.

Finally, the connexion took hold, I thanked the men, they left, and I lost internet. Then it came back, then I lost it again a few minutes later. If I'm quick, I can check e-mail or post tweets. I find it best to plan ahead for my little windows of connexion and like a well oiled machine leap into activity. Mostly I'm caught flat footed. "It's on, it's on! Oh, gods, what do I do first? Think!"

Having an intermittent internet is kind of worse than having none at all. I kept compulsively checking it last night, trying to Google for solutions in my brief windows. I was downloading the new Better Call Saul which got to 96% before Internet failed entirely for the rest of the night. Now that was frustrating. It wasn't until this morning that I finally downloaded the remaining 4%. So last night all I watched was a third season episode of The Simpsons, "When Flanders Failed". 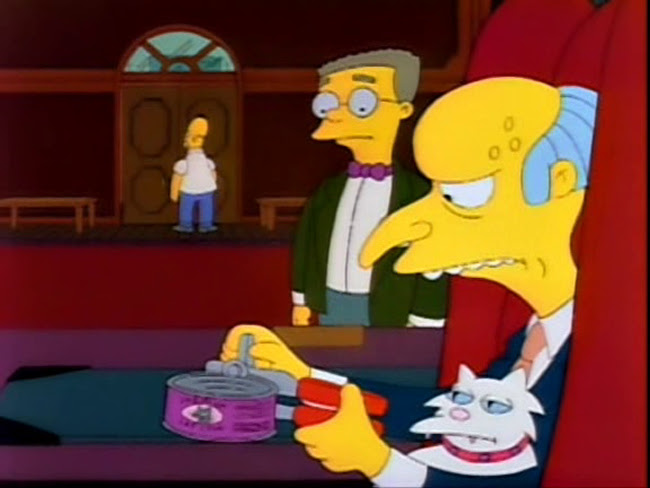 I love how Mr. Burns constantly has to be told who Homer is. "Simpson, eh?"

Again, I'm struck by how moral and gentle The Simpsons is compared to modern adult animated series. The episode opens with Homer trying to mow his entire lawn with a weed wacker which Flanders chides him for. It's very human and it develops the characters--Homer comes off as dumb and petty while Flanders is kind while kind of annoying for being so devoid of pettiness. And you like both of them. Family Guy and South Park would've given us some post-modern self-referential comedy or some cheap politics. I guess Bob's Burgers is probably much closer to classic Simpsons though I've only seen bits and pieces of Bob's Burgers.

Pretended bleeps won't censor stuff at all.
No mention made of mints mutated now.
A pillow's arm arrested growth this fall.
That winter goes for summer's cumbent cow.
The smashing watermelon played its seed.
Encumbering cucumber cummerbunds
Complete the tux the veggie men will need.
Orlando's dram misrhymes for Rosalinds.
Blank ostrich sheets can cover brains like men.
If hearts have failed and buckets fall like pails,
A star will pop like maize to make the grin.
Since you're not supposed to do like the whales.
Undrained, the peaty dome descends on space.
The shape of kinder beds appeals to grace.

Posted by Setsuled at 10:34 AM
Email ThisBlogThis!Share to TwitterShare to FacebookShare to Pinterest