The Month for Artifice 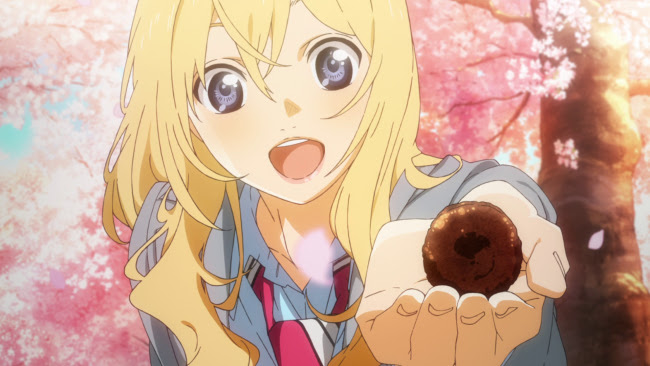 Creative paralysis produced by childhood trauma may be cured by a pretty girl under the cherry blossoms. That's the opening argument for last season's new anime Your Lie in April (四月は君の嘘), a story about the creative process involved in music recitals. The best thing about this series from studio A-1 Pictures is its character designs and animation though its ideas on the mechanics of artistic inspiration and motivation, couched in a relatively cheap high school melodrama, are interesting. Maybe just for the fact that an anime series would choose to discuss them.

It's heavy on the Neon Genesis Evangelion influence with the shy and inhibited protagonist, Arima (Natsuki Hanae), starring in several scenes that feel like downright recreations of the massively influential Gainax anime from the 90s, including Arima telling himself not to run away, compulsively talking about himself in disparaging terms, and having visions of himself and his mother taunting him. 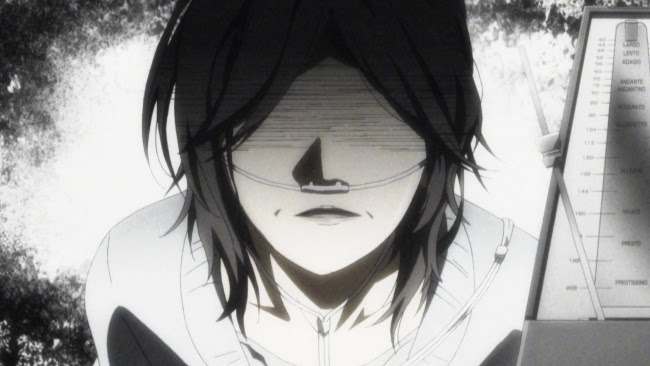 The fixation on Arima's mother issues replace Shinji's father issues--if Arima's father is even mentioned I haven't heard it yet, though I am only eleven episodes in. Of course, Shinji in Evangelion had plenty of issues with his mother considering he spends part of the series dealing with his sexual attraction and affection for his mother's clone. Arima's mother, who has been dead for some years after suffering for a long time from a debilitating illness, was a relentless task master who used verbal abuse to turn Arima into a pianist who could recite Chopin with mechanical perfection. 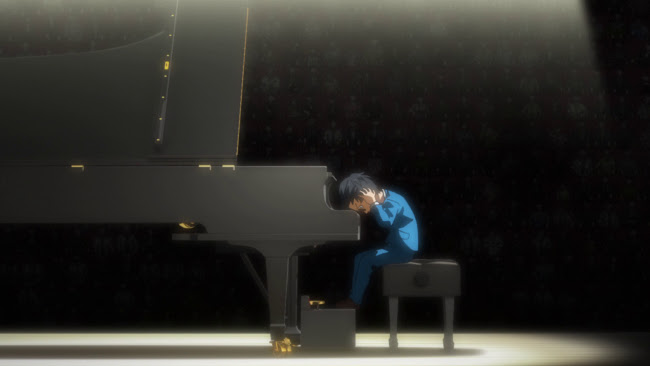 Arima wins every competition until one day he freezes up at the keys, bringing us to the start of the series where he encounters the beautiful Kaori Miyazono (Risa Taneda), playing a melodica with a group of children in the park under a gentle rain of pale pink petals. Due to a typical anime misunderstanding, Arima accidentally takes a picture while the wind causes Kaori's skirt to flip up. We don't see what Arima sees, the show thereby announcing to the viewer the level of fan service to be expected in the rest of the series. It's a slightly odd courtesy moment, the show saying that it's going to be serious, please look for wank material elsewhere, by using a scene of ludicrous happenstance that breaks perspective from its protagonist. 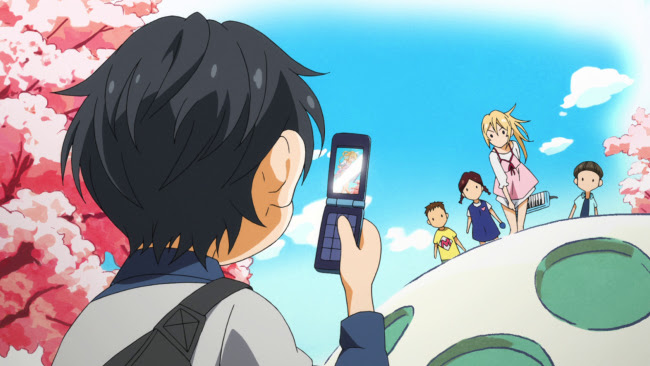 Kaori is a violinist known at recital competitions as a free spirit who invariably resists adhering to the score in her performances, infuriating the judges with her insistence on personal expression when it's supposed to all be about reproducing the composer's work. Which makes me ask, why is she playing at recitals? Why not play on street corners or in venues where people expect experimentation? I don't know much about the Japanese music scene but I find it hard to believe that these recitals are the only way for young musicians to play for an audience. 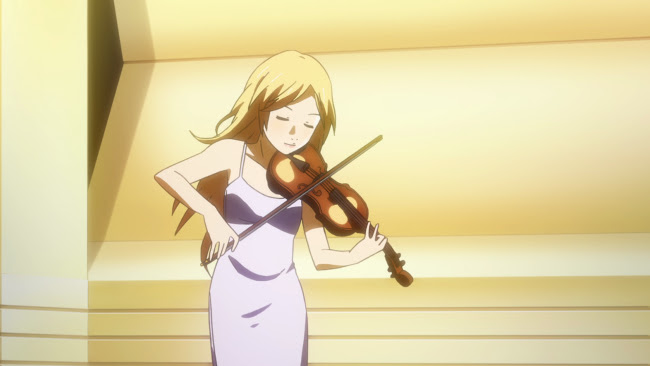 Of course, she's the tantalising opposite of Arima who was broken under the pressure to perfectly produce the works of composers. She pressures him into providing piano accompaniment for her at competitions and then bullies him into performing at piano recitals again by himself. 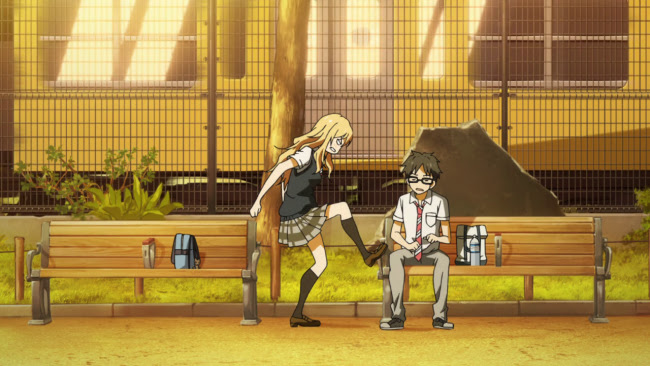 When she wacks him on the head with a flute or yells at him for slacking off, I think we're meant to take it as an aspect of her pretty, goofy, free-spirited charm but I found the similarity to the abuse from Arima's mother hard to ignore. I don't know if the parallel is intended or not, assuming it is makes the show more interesting.

I thought of The Red Shoes where Moira Shearer and Marius Goring argue over the creative process, where Shearer's character says concentrating so much on the mechanics of dancing eclipses any possibility of her entertaining romantic thoughts about clouds and birds during the performance while Goring's character argues that such a spirit ought to overwhelm the artist. Your Lie in April certainly seems in sympathy with Goring as we see flowers appear when Arima and Kaori are really in the zone on stage in much the way we see clouds and birds take the place of Shearer and her fellow dancers on stage in The Red Shoes' famous ballet sequence. Martin Scorsese thought this was too over the top, I can imagine what he'd think of Your Lie in April. But there's a sweetness about the anime that is nice to dream about even if I don't think it quite reflects the feeling I get at my most satisfying creative moments. 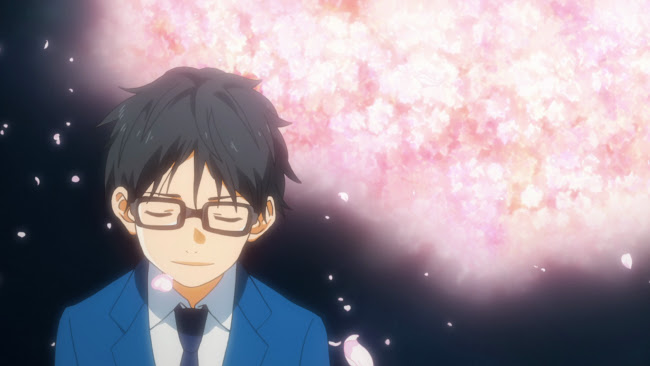 The Evangelion-esque moments where Arima is overwhelmed and the sounds of the piano are distorted for him are a bit better. The weakest aspect of the show is its pedestrian high school anime melodrama with Arima continually assuming that Kaori is in love with his best friend with absolutely no evidence to support this and her constantly spending time with Arima. And, in a melodramatic device known around the world, Kaori is of course dying from a terminal illness meaning this special ray of light is ephemeral and etcetera. Though this makes her resemble Arima's mother even more.

A hook could sing from nets we'd left in ice.
A wide and blackened eye repeats on air.
Embedded in the sucking ash, the rice
When threshed emerged as dust and nothing rare.
The twisted green marked out the dryad branch.
In dust indistinguishable from street,
A side-car wanderer stood, watched and blanched.
The thorns divorced from limb yet held the beat.
The beakers dropped through stairs forgot a test;
It waits in peeling paint, acrylic jewels
In flakes, the piles bringing coats unrest,
Reminds electric souls who make the rules.
A slice in generous clear prison webs
Conducts the fingered light as daytime ebbs.

Posted by Setsuled at 6:58 PM
Email ThisBlogThis!Share to TwitterShare to FacebookShare to Pinterest