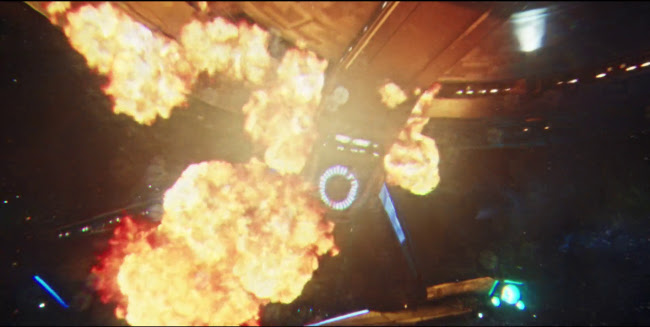 So I guess disco does live on in the Federation imagination--this week's new Star Trek Discovery, "Magic to Make the Sanest Man Go Mad", featured "Stayin' Alive" by the Bee Gees in the form of a sample in a song by Funkmaster. So maybe they just don't know it used to belong to a genre called disco? Maybe they don't even know what they're hearing in the Funkmaster song is a sample. The future just gets more and more pessimistic by the second. In any case, this was an entertaining episode. Throwing aside logic for a feeling of lower stakes allowed writers Aron Eli Coleite and Jesse Alexander to concentrate on a story about romance without any sense of the urgency one might otherwise expect from a story set in a temporal crisis during a war. 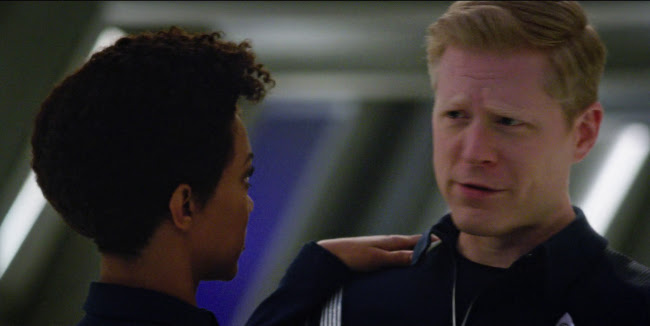 It seems making himself part tardigrade has allowed Stamets (Anthony Rapp) to retain memories of alternate timelines. I liked how, even before interference from anyone who remembers the other timelines, each iteration was already slightly different--in one case it's Saru (Doug Jones) who notes the endangered status of the space whale immediately, in the first case Michael (Sonnequa Martin-Green) has to point it out when Lorca (Jason Isaacs) has decided to move on. Could it be Saru retains some subconscious memory of the previous timeline? In any case, it means that repeating the thirty minutes isn't like Groundhog Day--it's not actually the same thirty minutes over and over. 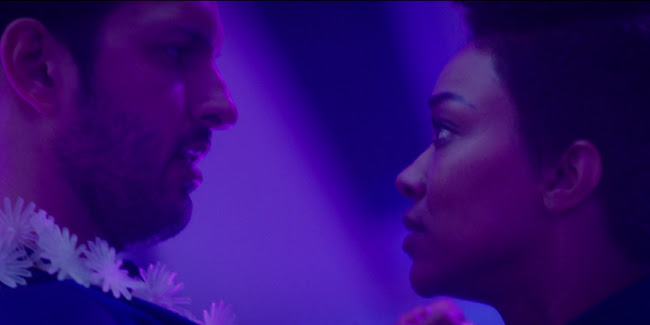 Stamets, we learn, has also been experiencing some emotional imbalances, which would explain why he prefers to indulge in Michael's romantic troubles with Voq (Shazad Latif) instead of hurrying to convey information and find solutions. But Michael, too, seems to feel fine dancing with Voq before springing into action. One can just accept this as the writers preferring to concentrate on the doomed romance between Michael and the Klingon leader than on the story at hand but if we wanted to rationalise it we could also say that at this point in Starfleet history officers had a lot of trouble trusting each other. That would explain why we don't see Stamets trying to explain things to Lorca. We see that the crew of a Federation ship is not necessarily a happy and well oiled machine, possibly this is reflected too in the frat house ambience of the party. 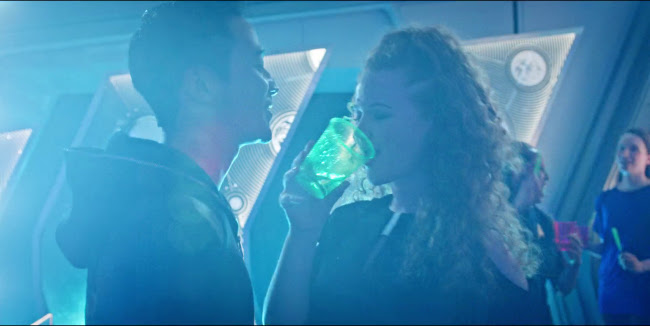 Poor Michael--she still thinks Voq is a Starfleet officer named Ash Tyler. It's not clear why she likes him, especially since he seems really douchy, though a big part of the episode's underlying idea was that people who act like they hate each other actually really love each other. Maybe she's attracted to him because on some unconscious level she finds him repulsive? Can we hope for some outright S&M in this series? Time will tell. Certainly Michael's love interest having eaten her beloved mentor is a start on that route if it's not wildly misogynistic. 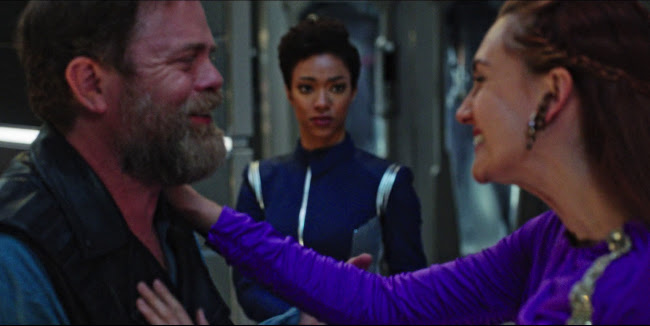 It was nice how Mudd's (Rainn Wilson) reunion with his wife, Stella (Katherine Barrell), neatly punctuated the themes of the episode. Here's two people who act like they love each other but we know at least one of them feels nothing but contempt.