For Hobbits and Elves 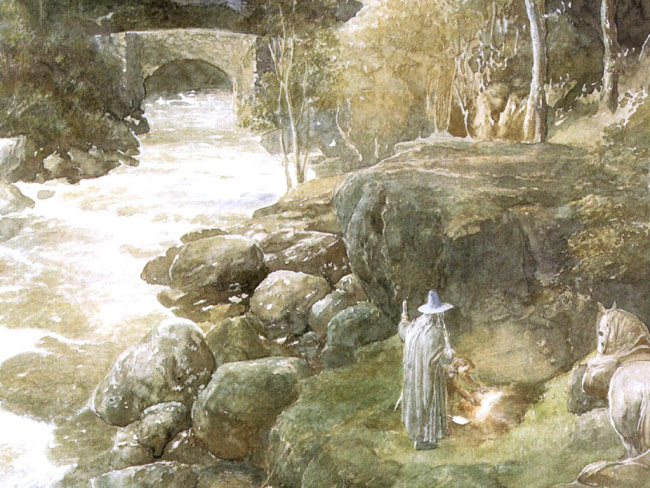 Lord of the Rings is really an underrated book and it seems to be getting more underrated as time goes by. I've finished reading it again last night and maybe I'm just in the afterglow of that beautiful, perfect ending but I think it deserves a place among the greatest works of literature. Not just for the power of the writing itself, which is both beautiful and intelligent, but for the place it occupies in the chronology of English literature. What Tolkien sought to do, and succeeded in doing, was to create an inspiring myth for a post World War I world.

I've read it through three times now--first in high school, then again just before Peter Jackson's film adaptations came out, and then over this past year. Between 1999 and now I've read The Silmarillion, Children of Hurin, and I've reread The Hobbit a couple times. In that time I've also read a lot more and now I find myself fascinated by the implications in the story Tolkien chose to tell when placed alongside the shifting attitudes in literature over the course of his lifetime. When I took British Literature II in college, the narrative I heard was of how the innocent idealisation of valorous warfare in works by Alfred, Lord Tennyson was made obsolete by the vividly portrayed reality of dehumanising warfare by Wilfred Owen. But what Tolkien gives us in Lord of the Rings are both perspectives in a single work. You have the glorious, doomed ride of the Rohan cavalry not unlike "Charge of the Light Brigade" and you have the horrific, day to day reality of Sam and Frodo's grim trek through Mordor in which it is difficult not to see something like No Man's Land in trench warfare.

It is especially inappropriate to look for allegory or precise ratio interpretations in Tolkien's work because he specifically rebuked such attempts throughout his life. "As for any inner meaning or 'message'," Tolkien wrote in a forward to the second edition, "it has in the intention of the author none. It is neither allegorical nor topical." I tend often to quote Tolkien's disdain for allegory because I think he's right, not just in referring to his own art but any other. Lord of the Rings is great because it can be interpreted as being about addiction, or a specific war, or a specific political conflict, or none at all. Its power is in its ability to have different personal meanings for different people--and yet, at the same time, because it is the same work, it unites people as a reflection of common human experience in infinite manifestations. So although Tolkien was himself anti-Communist, it's no wonder he so vigorously insisted there was no ant-Communist allegory in "The Scouring of the Shire"--not because he had no wish to insult Communists but because he didn't want to codify any one interpretation.

It is striking, though, how like the miseries of Communist countries are those depicted in that penultimate chapter in the Shire. The ubiquitous, ugly, crudely constructed brick houses, the "ruffians" who take everyone's food for "redistribution" that ends up just fattening the bosses. But one could as easily say that the normal state of affairs in the Shire, without any real central authority, and with generous gift giving and feast providing traditions, represent an idealised Communist society. Tolkien doesn't present any logical arguments about how feasible any specific form of government is, his writing mostly focuses on the sensory and on specific characters.

As we're in an era where political interpretations are vigorously enforced on works whether the authors like it or not, The Lord of the Rings presents several contradictions that must be maddening to interpreters unable to keep their vision sufficiently narrow. Tolkien spends a great deal of time describing the beauty of a divinely ordained inherited rulership yet also talks about the virtues of freedom and arguably his most human character is Sam. One could say Lord of the Rings presents an affectionate praise of the working class in an intricate ode to fascism. Tolkien disliked his friend C.S. Lewis putting clear references to Christianity in the Narnia books--and one could argue Tolkien is vindicated in the much wider appreciation garnered by Lord of the Rings--though it seems likely Tolkien's Catholicism, specifically in contrast to anti-Catholic attitudes he encountered through much of his life, made him a natural booster for divinely ordained figures of authority and for the ability of such figures, like Aragorn or Theoden, to unite a populace by inspiring them. A modern reader might scoff at Eomer and Gimli arguing over whether Arwen or Galadriel is the more beautiful but this is isn't two guys rating babes on a scale of 1 to 10, it's two people discussing figures whose beauty and grace have inspired them and motivated them through bitter experiences.

So if there is any argument being made by Tolkien in the book, it's in the value of beauty. The despoiling of nature by Sauron and Saruman, the reckless destruction of forest and works of art, like the beheaded statue Sam and Frodo come across, aren't merely the signs of evil but the purest manifestation of it. By contrast, the light of Galadriel, the beauty of Rivendell, inspire and therefore are the sources of peace.