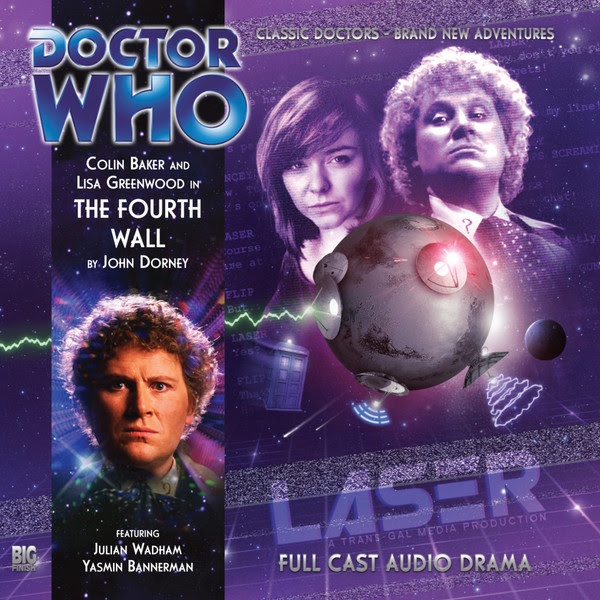 The Doctor was once again pitted against the absurdities of his own show in the 2012 Sixth Doctor audio play The Fourth Wall. The audios have done this a few times with stories like The One Doctor--also a Sixth Doctor audio--though The Fourth Wall ostensibly sets its sights a little wider, satirising space opera serials in general. It's funny, has some surprisingly effective drama, and is the third to feature Six's companion Flip who continues to be an enormous delight.

A whole artificial planet called Transmission has been made for the purposes of creating a television series called Laser about a hero named Jack Laser (Hywel Morgan) and his companion, Jancey (Tilly Gaunt), who battle the evil Lord Krarn (Martin Hutson). Due to some kind of mix up while the Doctor (Colin Baker) tries watching a cricket match on a special television on the TARDIS, Flip (Lisa Greenwood) is transported onto the planet into the fictional scenario. The actors apparently perform scenes and in a place in time slightly out of phase with the present the characters become real and "improvise". And that's where Flip finds herself.

The stuff with Laser is pretty much the standard superhero parody you might see on The Tick--the big, dumb, improbably lucky hero armed with corny quips--though Jancey's tendency to scream when there's trouble clearly seems aimed at Doctor Who. My favourite part, though, is Lord Krarn who perfectly satirises everything I hated about the Master in 1980s Doctor Who. He says he wants to take over the universe and he's going to wipe out the human race and Flip finally asks the questions no-one ever thinks to ask the Master in the 80s--why the hell would you want to control the universe and how does destroying the human race help you accomplish that? To which Lord Krarn becomes flustered and can't answer. One of the reasons Missy is my favourite incarnation of the Master is that Steven Moffat actually does a pretty good job explaining the Master's behaviour as a repressed affection for the Doctor--something that's set up in the Third Doctor era with a few lines about how he and the Doctor used to be friends but the idea wasn't really explored until recently.

The Fourth Wall, written by John Dorney, also has some nice stuff about how one shouldn't underestimate the affection fans have for even poorly written fantasies. Krarn encountering his creator almost recalls Roy encountering Tyrell in Blade Runner--Krarn is understandably angry that his wife was killed off just to give him a motive to be evil. It must be quite a shock to discover one day that one has been badly written, I don't really blame him for wanting revenge.

Posted by Setsuled at 1:45 PM
Email ThisBlogThis!Share to TwitterShare to FacebookShare to Pinterest