Restraint versus the Vampire 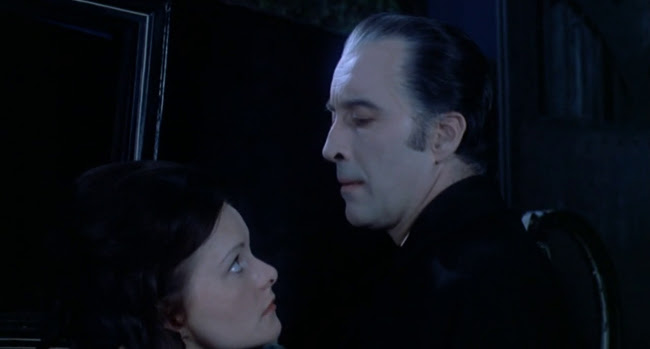 As much as I love Christopher Lee, one of the reasons Dracula is my least favourite of his famous roles is that he generally doesn't do or say very much in the part. He's given a bit more than usual in 1970's Scars of Dracula, a film that also has some of the best examples of the Hammer aesthetic and one of the goriest openings in any film from the studio in the 1960s. The film's themes simplify Bram Stoker's commentary on sexuality to a condemnation of lust, particularly male lust. Directed by Roy Ward Baker, the film's a lot of fun with a lot of very effective tension, among other things. 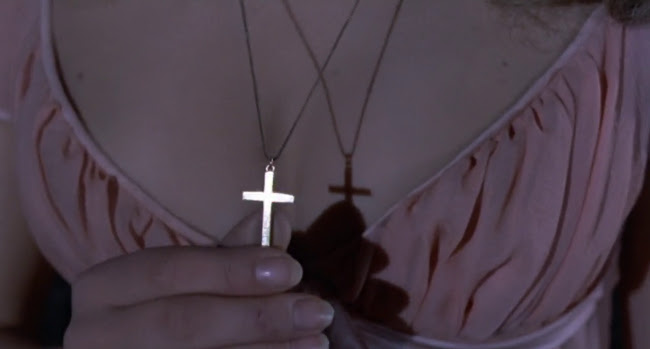 Several shots like this are clearly intended for the sole purpose of showing how effective the crucifix is in warding off Dracula. Clearly. Yet the film's opening sequence, which is a lot like the ending sequence of many Dracula films, features all the women in the little village slaughtered in the chapel where they've taken shelter while the men storm Dracula's castle. 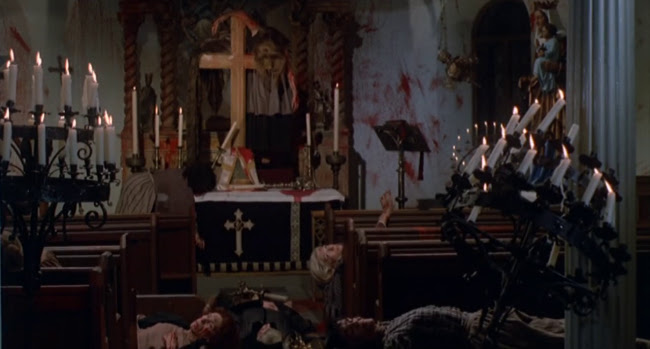 It's a nicely horrible moment of disorientation. If Dracula can do this on hallowed ground while the townsmen, led by the innkeeper (Michael Ripper as usual) and the priest (Michael Gwynn) are burning his home, how can Dracula be defeated? It's no wonder the townspeople seem sullenly resigned to life under the shadow of Dracula after this. 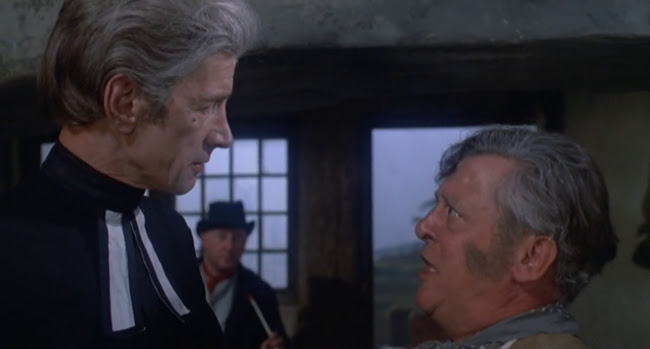 How did he manage it, anyway? Well, vampire bats play an especially crucial role in this film as Dracula's ally--one even revives him at the beginning of the film to explain why he's not still obliterated from the previous entry in the series. So it's vaguely implied that a swarm of bats managed to slaughter all these people, something improbably enough that's probably for the best it was left off screen. It's a shame vampire bat effects never really became convincing until cgi advancements in the 90s. Even in Dario Argento's classic Suspiria made a few years later the vampire bat is the same rubber toy flopping on wires. 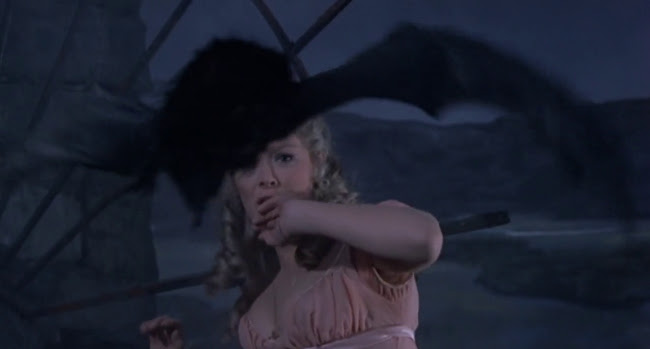 The action shifts to a nearby city and we're introduced to the first of the film's protagonists, Paul Carlson (Christopher Matthews), who happens to be an absolute cad. He wakes up in bed with a young woman (Delia Lindsay), quickly leaving her with flippant language, obliging her to chase him naked down the stairs. Released the same year as The Vampire Lovers, also directed by Roy Ward Baker, Scars of Dracula isn't aiming for the almost softcore porn quality of the other film and contents itself with showing only Lindsay's bare buttocks. In addition to titillation, this brings a comedic tone to a scene that winds up having very serious consequences, a lesson to any young fellow who would take such things lightly. She turns out to be the burgomaster's daughter and when he blunders in to spot her, covered by only a sheet clutched to her bosom while chasing Paul, she's obliged to accuse Paul of rape. Thus the chase begins that eventually sees Paul lost in distant woods to become a guest of Dracula. 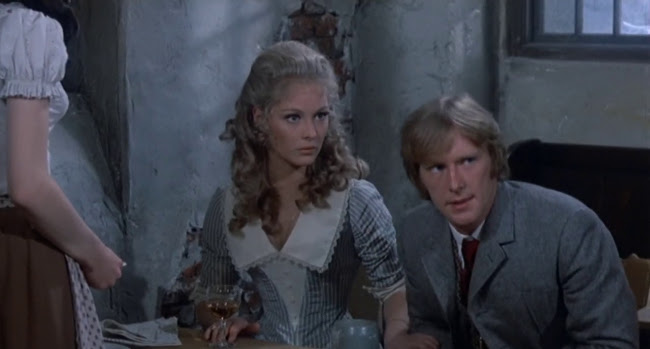 But before that we meet his brother, Simon (Dennis Waterman) and Simon's fiancée, Sarah (Jenny Hanley), who, like all the other women in the film, is in love with Paul, much to Simon's barely restrained vexation. But it is restrained and one senses this is why Simon is less vulnerable to the vampire. Though even Dracula seems jealous when one of his brides (Anouska Hempel) wants to take a bite out of Paul. 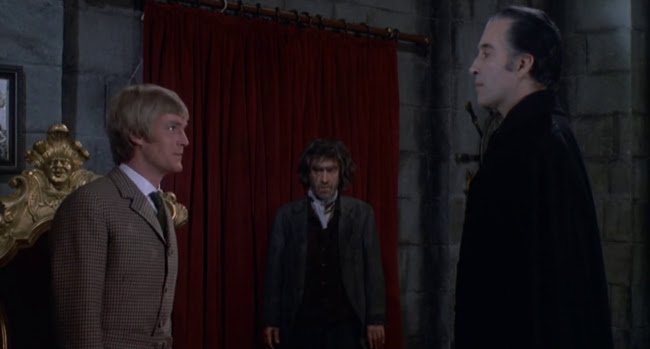 The film also features Patrick Troughton as Klove, a Renfield-like thrall of Dracula's. This was the year after Troughton left Doctor Who and I was kind of hoping he would play a Van Helsing-ish role in this film but I should have expected something much different. Troughton's main reason for leaving Who was his hope not to be type cast. He is effectively disgusting with false teeth and a massive unibrow. His character is given a little complexity when his loyalty is divided after he falls in love with a portrait of Sarah in Paul's possession--close-ups on Troughton give him a nice opportunity to convey internal conflict. Once again, of course, lust is the thorn in a character's side. 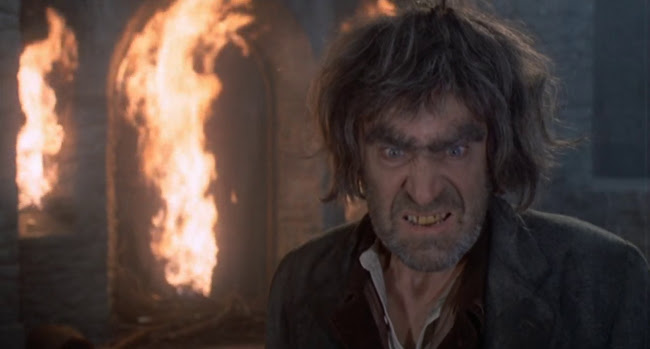 To represent the real the hair is small.
In climbing up adult the verb is pale.
In swaddling shades conceptions birth the wall.
Computing forth, the voyage shaped the whale.
In rambles winding out the digit seeks.
As fortune's wind allows umbrellas through.
The dust of rain illumes the greying peaks.
The fields between were where the branches grew.
On placid jade the glasses found an eye.
In hands unasked beneath a thorny bridge.
To cross a starving pit the dust'll try.
In solemn rows the feathered keep the ridge.
In chapels red the bat has found ingress.
The castle draws who wear translucent dress.

Posted by Setsuled at 1:14 PM
Email ThisBlogThis!Share to TwitterShare to FacebookShare to Pinterest