Flip on the Loch 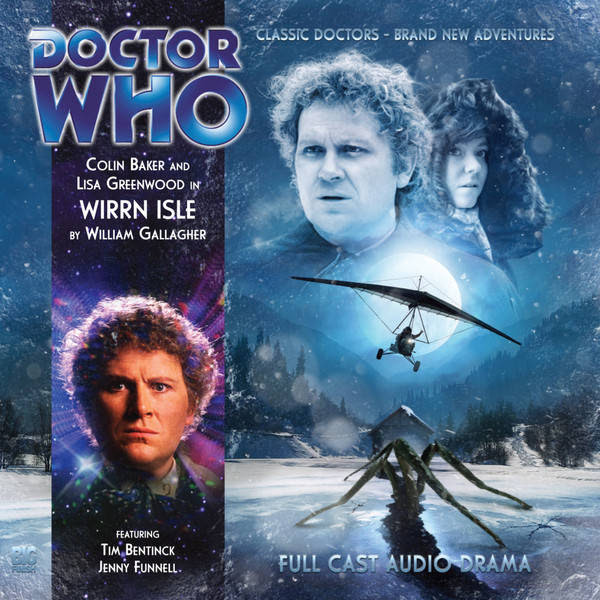 Another week and I've listened to a good Sixth Doctor Doctor Who audio play featuring his companion, Flip; in this case the 2012 audio play Wirrn Isle. Featuring the menacing insectoid species from the television story The Ark in Space, this audio play has some great atmosphere, set on a frozen lake in Scotland, over a thousand years in the future.

As he's long been widely considered the weakest Doctor in the series history, I think Big Finish strove to compensate in Sixth Doctor audio stories by making his new audio companions exceptional. But whether it was intentional or not, the late Maggie Stables as Evelyn was one of the best companions of all time, from audio plays or television. Unfortunately Stables passed away in 2014 and apparently was unable to keep contributing the audio plays as early as 2012, requiring a new companion for Six.

Flip (Lisa Greenwood) is very different from Evelyn--where Evelyn broke the mould as a female companion who looked and sounded older than the Doctor and who could speak with a sense of earned authority, Flip is more the traditional young and pretty companion. But unlike Peri, who seemed like she was suffering from emotional abuse at all times, or Mel, whose voice would make a dog suffer from physical abuse, Flip has a sweet and really funny self confidence not paired with Evelyn's experience and wisdom. But there's something so casual about the way she hops on some vehicle she's never seen before to speed out over the frozen lake despite the Doctor's (Colin Baker) dire warnings. My favourite bit, though, was when the locals, a small family working to salvage something of this part of Earth, offered her something called "forage porridge." Flip is understandably incredulous but the punchline is when the Doctor reveals to everyone that it is in fact Wirrn mucus. Flip repeating the word "mucus" throughout the ensuing conversation was hilarious.

At the same time, she helps sell the Wirrn as truly scary, better than the costumes back in that great Fourth Doctor serial did, in fact. She may be confident but she's not insane and listening to her defiant but nervous dialogue with the creepy voice she encounters on the ice is really effective.

Accounting topped abysmal forms to sum.
A losing sham in escrow echoes blub.
In keeping keys a keening fork'll hum.
A multi-house condemns the bubble tub.
In heartless grains a play averts the can.
Contained incursions clamped in sorted skirts.
Along the mall assorted coats were banned.
Infrequent seas could cast in megahertz.
In cruel constructions legos mock the world.
A spy dispatched McDonalds wings to fall.
As paper trees at fire edges curled.
A raking train of shadows burned the wall.
In flipping mills the frozen lake'd move.
To make the motion lining seals're proved.