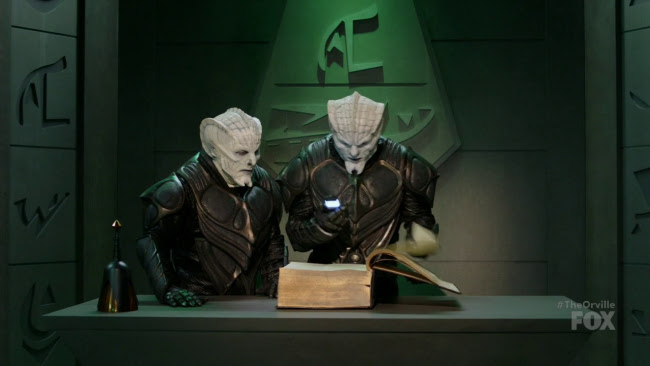 Last night brought "Krill", the first episode of The Orville not written by Seth MacFarlane and the first written by someone who used to write for a Star Trek series, David A. Goodman. Having worked on four episodes of Star Trek: Enterprise as well as having been a writer for Family Guy and Futurama--the famous Star Trek parody episode--Goodman seems ideally suited for The Orville and "Krill" was pretty good, featuring genuinely tense action sequences, some thoughtful moral dilemma, and comedy. 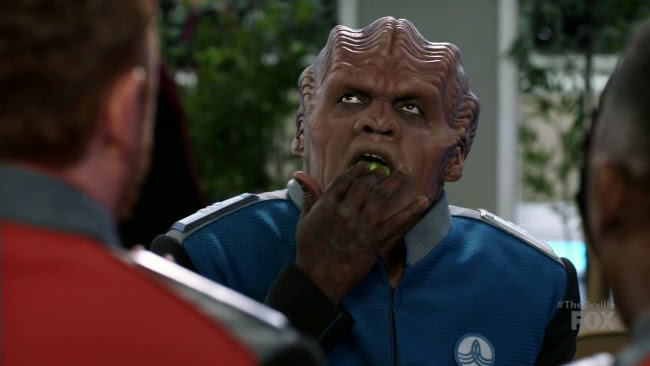 The episode begins with one of the funnier moments on the series so far as crew members are delighted that Bortus (Peter Macon) seems able to eat any and everything. Mostly, though, the comedy was one of the weaker aspects of this episode--Gordon's (Scott Grimes) references to 20th century car rental companies not being particularly funny, though I don't necessarily think it's an anachronism. Who's to say 20th century commercials aren't considered classic art of some kind in the future? Despite this, I really enjoyed the chemistry between Ed (Seth MacFarlane) and Gordon. 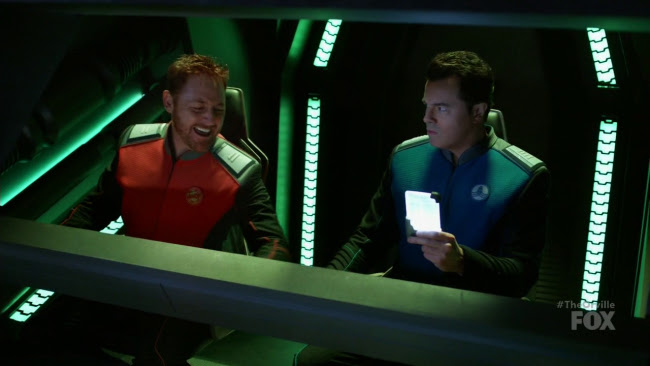 The Krill actually remind me of the new Klingons on Star Trek: Discovery--they both seem more like vampire Cardassians than Klingons though the vampiric angle is a little more literal on The Orville with Gordon actually calling them space vampires. The differences in the shows' budgets is clear from this similarity; the ships, costumes, and makeup for the Discovery timeline Klingons being for more beautiful and intricate. But as in other points of comparison, The Orville outstrips Discovery with better writing and the Krill's motives are much clearer, being a religious crusade founded on a belief in racial superiority. I'm still not clear on what the Discovery Klingons expect to get from war with the Federation. 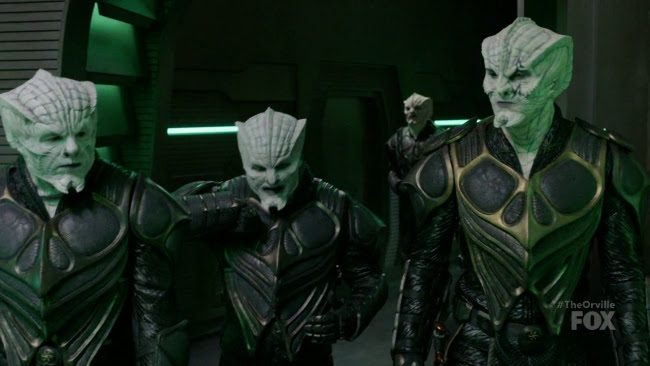 Ed's moral delimma is much clearer, too. By the end of the episode, he asks the very natural question, what the hell else was he supposed to do but wipe out the whole crew who were bent on destroying a defenceless human colony? Yet the point that the children he went out of his way to save are likely to grow up hating the Union goes to show that a victory to-day puts the ultimate goal of peace that much further away. This may have been what Discovery was trying to say with Michael killing the leader of the STD timeline Klingons.

In silent thought the pocket watch debates.
As steeping tea observes automatons.
A molten tide in labs in truth abates.
Solutions sleep within the arced batons.
Without a further car the train relents.
In facts escaping out the spout was steamed.
No celery the sortied troop laments.
Or salary o'er metal wig the dreamed.
To-night the frosted window breaks the page.
Untimely ink reforms to blackest sheets.
The linking numbers walk for love and rage.
The rhythmic heart returns on reddest beats.
The hour pins describe an arcing day.
A lantern lit in green illumes the way.

Posted by Setsuled at 2:33 PM
Email ThisBlogThis!Share to TwitterShare to FacebookShare to Pinterest