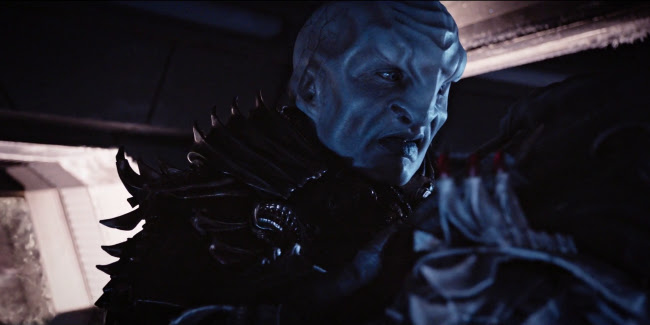 Starfleet's finest continued trying to discover motivations for their pointless arguments in last night's new Star Trek: Discovery while Klingons struggled to show emotion through a thick sheath of makeup and full Daedric armour. But the show's flaws were once again offset by lovely visuals and good performances.

I'm pretty sure if Buffy stakes this guy it wipes out all the vampires in Sunnydale. So far Vulcans are the only aliens to be depicted with hair on STD. Is there something too human about hair now?

Klingon cuisine is certainly more colourful in the Discovery timeline.

It seems the Klingons are having trouble keeping their people fed, unlike the Federation, which could be an interesting motivation behind their war effort. I wonder how the writers will follow up on it in future episodes. Maybe it's because the Federation is too busy feeding people they left some valuable equipment floating around on the Shenzhou for the Klingons to salvage. 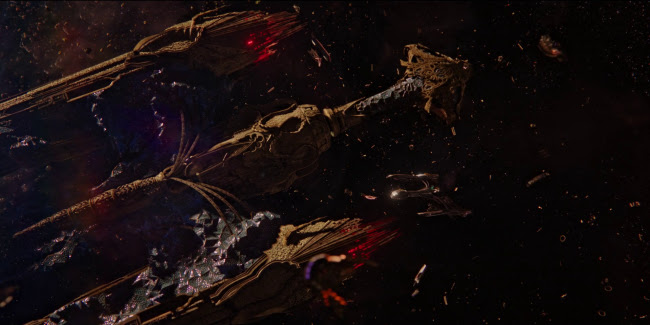 Meanwhile, on the Discovery, a turbolift conversation between Michael (Sonequa Martin-Green) and Saru (Doug Jones) establishes that his "threat ganglia" can react even when the threats Saru perceives aren't real, as in the case of Michael just standing next to him on the turbolift. With this established, in a later scene Michael can use Saru's threat ganglia to determine whether "Ripper", the tardigrade creature from the previous episode, is really a threat. Er, right? 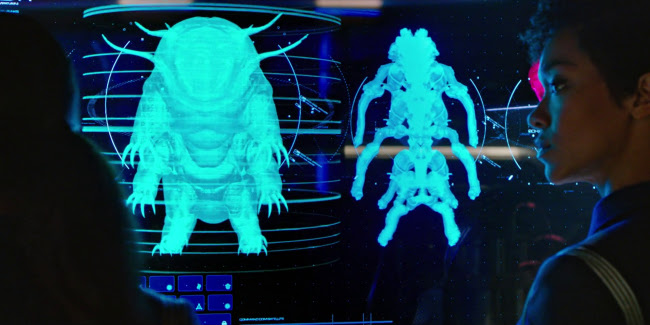 I kept thinking about the now oft-quoted line from Jeff Goldblum's character in Jurassic Park: "Your scientists were so preoccupied with whether or not they could, they didn't stop to think if they should." In this case I'm thinking of the writers who were so excited to ditch Gene Roddenberry's rule for Federation people that they not have interpersonal conflicts. Now we have interpersonal conflicts for no reason at all. When Saru realises Michael is using his threat sensor to gauge something about the tardigrade's nature, the supposed science officer has his feelings hurt by his colleague's benign attempt to learn things about an alien creature he compares her to the presumably ruthless Captain Lorca and storms off. I guess this series depicts the adolescence of the Federation. 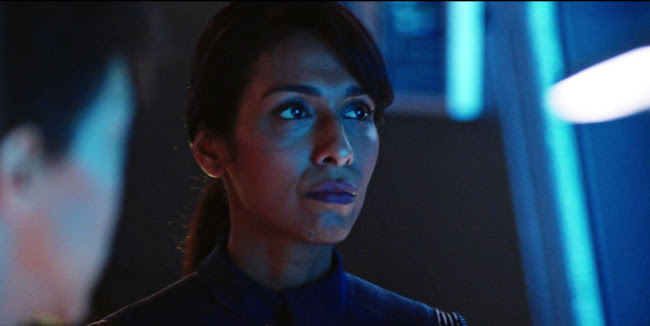 The episode is called "The Butcher's Knife Cares Not for the Lamb's Cry", best read in the voice of Nathan Explosion. I guess the lamb in this case might refer to the dumbest tactical officer in Starfleet, Landry (Rekha Sharma), who douses an alien life form with tranquilliser and opens its cage before knowing if the tranquilliser worked and fires a phaser at it she knows doesn't work. Luckily Michael has presence of mind to set the lights to full, causing the creature to retreat to darkness, despite apparently not being bothered by light later on when it's feasting on fungus. As dumb as Landry was, I still felt annoyed for her sake when Michael called her out for referring to the creature as a monster. How was Landry to know the creature's behaviour would completely change from the previous episode when it attacked a Klingon just for shushing someone? Maybe it remembered the Klingon attacking it earlier, so it's a lucky thing it apparently forgot about Michael attacking it in the previous episode. 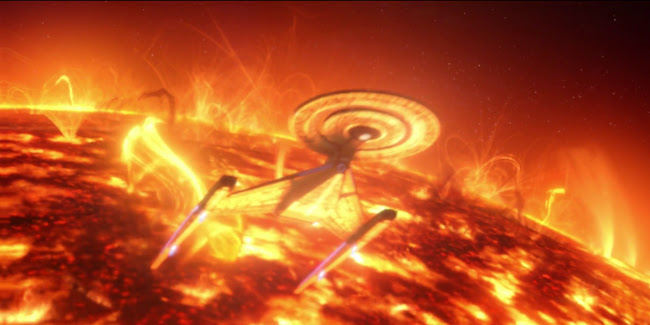 But lest I give the impression I found nothing good in this episode, the sequence where the Discovery escapes from a sun's gravity is really cool. Still, I am a little tempted to stop watching, but the next episode may be written by better writers and anyway I do want to see Rainn Wilson's take on Harry Mudd.