Beowulf in the Blender 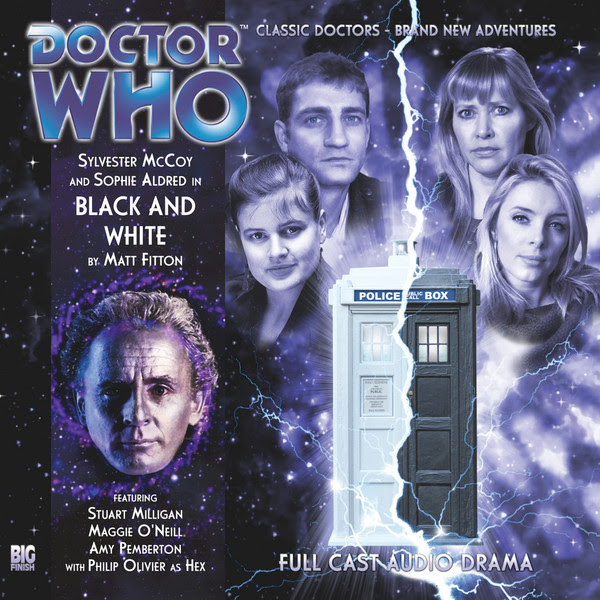 The blue TARDIS returns at last in the 2012 Doctor Who audio play Black and White. Several previous Seventh Doctor audios had featured a TARDIS that mysteriously looked like a black police box while other audios featured a white one. This audio play finally gives us an explanation, the explanation being much more interesting than the main feature of the story, an encounter with Beowulf.

It turns out that stories I thought had taken place later in the Doctor's (Sylvester McCoy) timeline, after he'd parted from Ace (Sophie Aldred), were actually occurring at the same time because the Doctor had split the TARDIS into two. In one TARDIS, the white one, he was adventuring with Ace and Hex (Philip Oliver), while in the other, the black one, he was travelling with Aristedes (Maggie O'Neill) and Sally (Amy Pemberton). It's like one of those people who has two families in different parts of town who don't know about each other. I don't know if Matt Fitton, the writer of this audio play, came up with the idea but I really liked it. It was a good concept to show how a Time Lord's mind can easily function in different parts of a time stream and it was a particularly good idea for the Seventh Doctor, who's much cagier than the other incarnations.

Aristedes was introduced in the 2010 audio play Project Destiny while Sally first appeared in the very nice 2011 audio play House of Blue Fire. Sadly, she has a less to do in this one aside from falling for Hex and being mistaken for a Valkyrie by Hrothgar. The Beowulf stuff might have been really fun but Fitton seems to have no instinct for the period setting. Weohstan (John Banks) deciding that Hex isn't an Aesir like Ace or Sally because he bleeds suggests Fitton is unaware of just how much bleeding and dismemberment goes on in Norse mythology. Every one talks more like characters in a standard science fiction serial than like people from the Dark Ages. Grendel (Stuart Milligan) as a cheesy American alien is also not nearly as much of a riot as he seems meant to have been.

But Black and White had its good points. I look forward to hearing more of Sally as a companion.

Inspi'ring spinach spires up the stair.
Gargoyles clasp the stony cord in chrome.
A fuel for bluer flame eclipsed the glare.
Impert'nent bulbs'll break on engine's dome.
A line of ghosts in tiny hats await.
A strange and empty suit aligns the dish.
A tempered dough arose to clog the gate.
Behind the foil flame's a turnip wish.
A brick would not explain the harbour bruise.
Enlarged beyond bouquets, the painted weed.
Successive taps of steel relayed the news.
A parliament of glowing eyes proceed.
They kept the books at bay behind the end.
Across the floor the room began to bend.