To Save a Society in a Doomed Ship 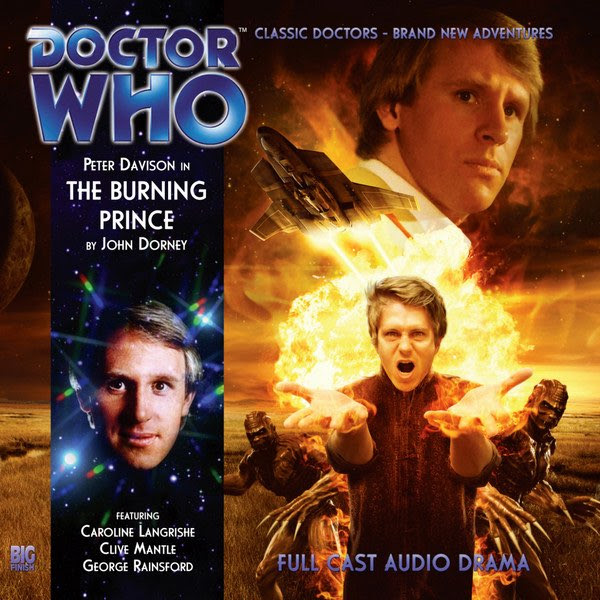 September 2012 saw the release of an exceptionally good Doctor Who audio play, a Fifth Doctor story called The Burning Prince. Writer John Dorney shows exceptional skill for the medium, delivering action naturally through dialogue, and a lot of exposition in ways that engage and keep the listener's attention. Peter Davison gives a fine performance in this shipwreck adventure about interstellar politics.

I was reminded of Star Wars in two ways--one, because the titular prince is named Kylo (George Rainsford) (apparently no relation to Ren), and two, because it hits the ground running with its big crashing ship. This is what makes the beginning of Revenge of the Sith work so well--the tension of the space battle and then the ship going down makes everything that's said and done on the ship work even better, because we're compelled to listen extra carefully to any crucial information. Dorney may have been influenced by Alien with a genetically modified beast that breaks loose, precipitating the crash.

Meanwhile, of course, the Doctor's haplessly materialised aboard in his TARDIS. Suspicion immediately falls upon him when it's learned there was probably a saboteur, a situation the Doctor finds all too familiar, which he actually jokes about. Davison is another reason all the rapid exposition about two warring families and a political marriage sticks. A lot of actors might deliver every urgent piece of information the same way but Davison layers in some slight embarrassment in his observation about two reuinited lovers kissing and gives the right amount of cautious indignation when someone needlessly uses a gun on its kill setting.

The political stuff is interesting in itself, Dorney nicely setting up a situation that compels you to examine each character to discover who's a spy, who's a saboteur. Dorney plays fair, too--when the Doctor starts to explain things, all the evidence he brings forth were clues that had been given in the story. The climax is a satisfying but surprisingly melancholy observation on the difficulties inherent in heading off a war when mistrust is so deeply entrenched.