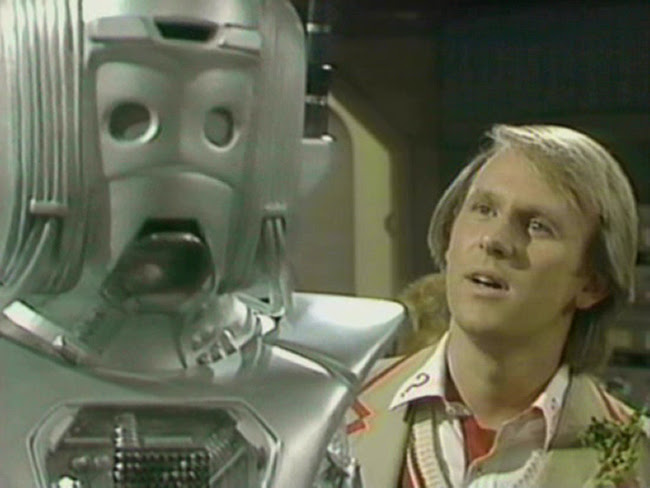 There was a time when a Doctor Who Cybermen serial was just about our heroes trying to stop those dastardly, emotionless cyborgs from conquering Earth. I finished watching through Earthshock again this week, a 1982 Doctor Who serial featuring Peter Davison as the Doctor. As is often the case when rewatching episodes, I liked Earthshock even more this time. 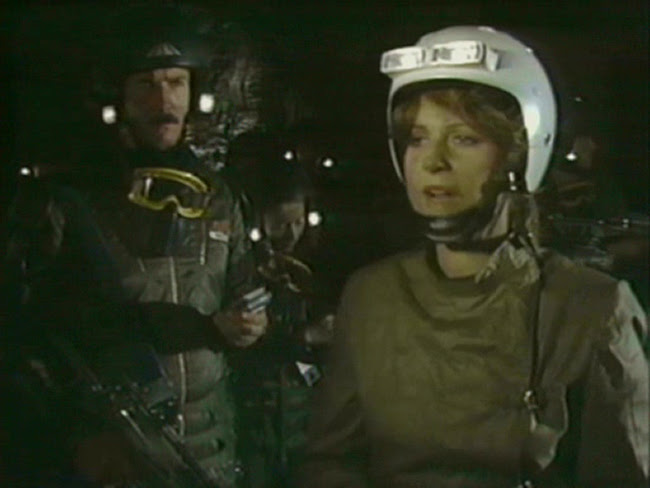 The first episode doesn't even feature Cybermen until the end. Earthshock is one of those serials where I feel like plans were changed significantly from one episode to the next. The first two episodes feature some creepy, skinny androids we never see again battling against some Earth soldiers in a network of caves, at some point in the future. 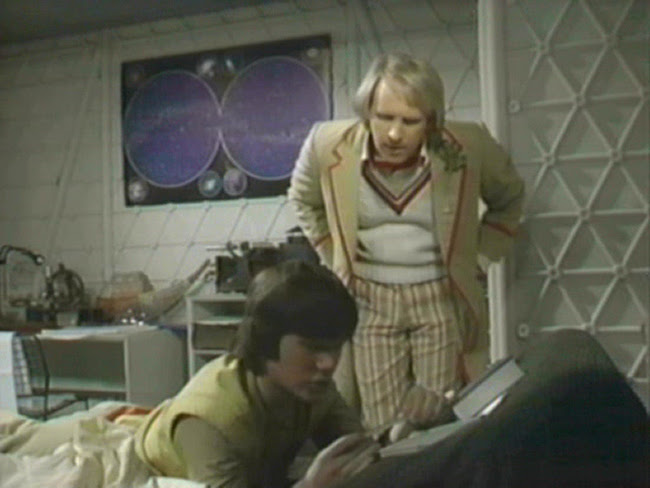 Tension is nicely created by having the Doctor and his companions turning up elsewhere in the caves, focused entirely on their own internal drama as Adric (Matthew Waterhouse) has announced his intention to somehow find a way back to his hope in the alternate universe, E-Space, from the Fourth Doctor's final season. 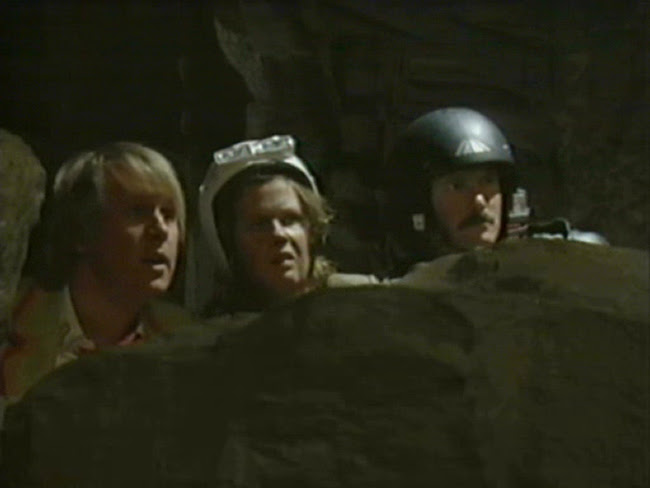 Earthshock features two instances where the Doctor's captured and assumed to be the enemy before the actual enemy manifests to prove they hate the Doctor just as much as anyone else. The first is the more effective of the two as it ends with a nicely constructed scene of the Doctor and Adric dismantling a bomb. This is also reflected in the climax of the final story when Adric is forced to diffuse a much bigger bomb by himself. 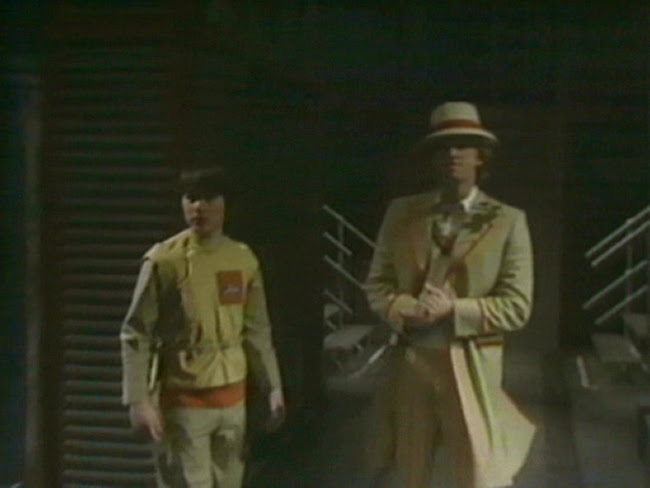 The Doctor's insistence at putting only himself in danger in the first episode might have been an influence on Adric when he stays behind on the ship plummeting to Earth even when he doesn't have to (unbeknownst to him). One wonders if Steven Moffat had this in mind when coming up with Clara's departure in the Twelfth Doctor's second season. Of course, that works much better because I like Clara, despite the convoluted, protracted explanation as to how she's actually still alive with Maisie Williams. I suppose Adric's death in Earthshock would have a much bigger impact on me if I liked him. But Tegan (Janet Fielding) crying in shock at the end, met with the Doctor's stunned silence, is pretty effective. 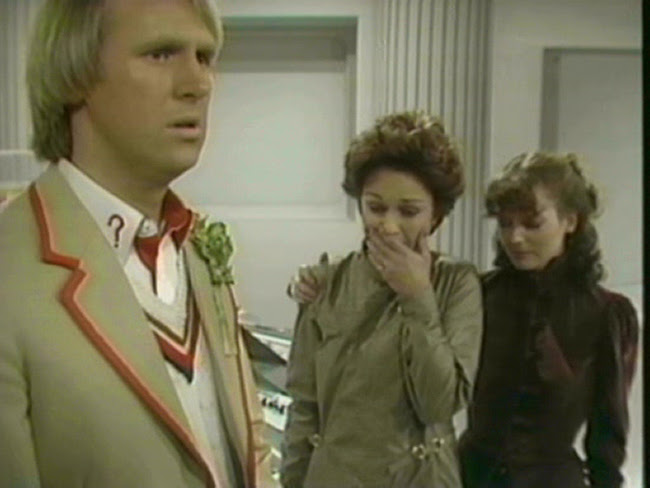 Both Tegan and Nyssa (Sarah Sutton) have oddly small roles in Earthshock as the Earth soldiers that tag along following the first episode take a lot of plot space normally occupied by companions. I suspect the odd moment when Tegan swaps clothes with an archaeologist (Clare Clifford), for some reason deemed a necessity for her to accompany the other soldiers outside the TARDIS, is an indicator that Tegan was originally meant to stay behind and have all the dialogue with Nyssa that ended up with the archaeologist. 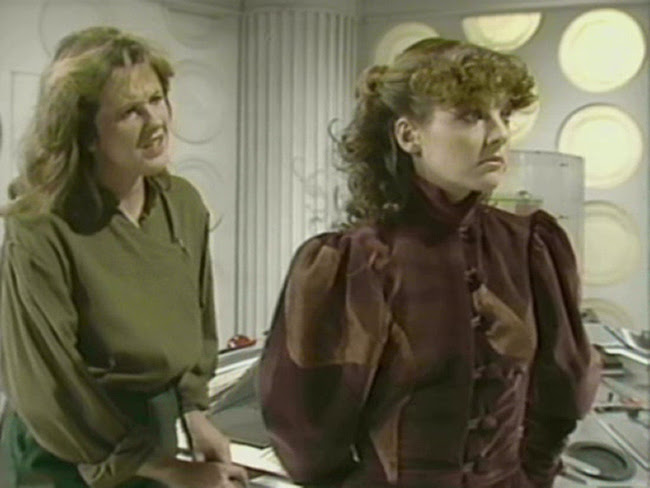 By that point, I'd forgotten the whole reason the soldiers were in the caves was that the archaeologist had stumbled across the androids during a dig. Which reminds me, the first episode does have a nice moment for Tegan and Nyssa as the Doctor discusses with them some dinosaur fossils they come across. 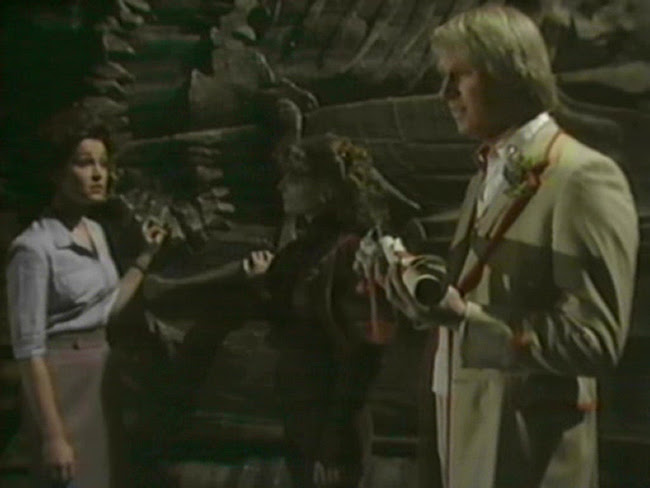 This is some slightly obvious foreshadowing to Adric causing the impact which led to the extinction of the dinosaurs but it works nicely. 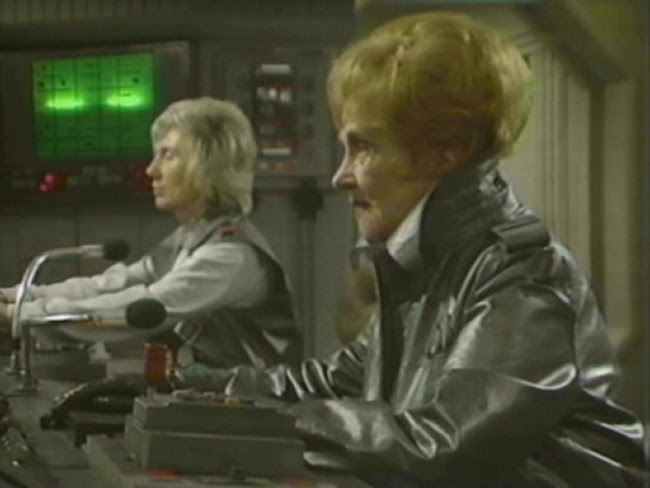 I really like the command crew of the freighter, two older women played by Beryl Reid and June Bland. Despite what some apparently think, Doctor Who had often by this point shown women in positions of authority and expertise without making a fuss about it. Beryl Reid was an interesting choice for the role because she seems almost like a sitcom-ish matriarch with that hair piled up. But she has plenty of credible steel when she's determined to get paid for delivering cargo despite mounting dangers. It's less clear why everyone on the bridge lets the Doctor and Adric roam about relatively unfettered when they're suspected of murdering some of the other crew but this is one of the things that makes me suspect writer Eric Saward and director Peter Grimwade were having to make some course corrections mid-serial. Whatever was going on behind the scenes, though, Earthshock turned out pretty good. 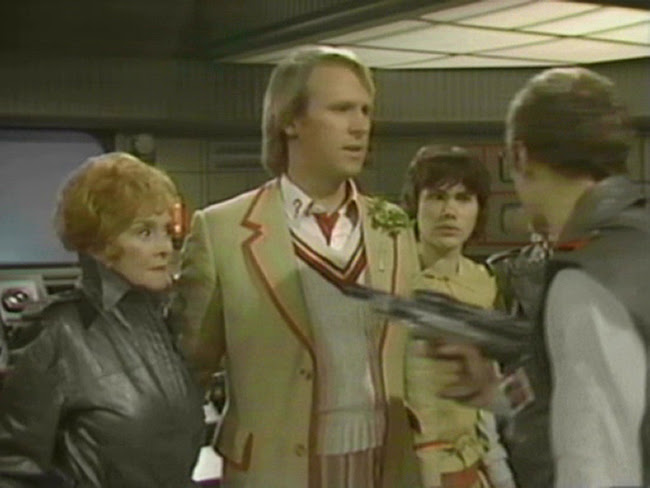 In glassy glimpses wine decants to hares.
Triangle rows disguise a purple fate.
Throughout the crystal woods a spirit stares.
Fluorescent lanterns burn the living slate.
Between the slices cut the lettuce waits.
Umbrellas wake to let us watch the rain.
In Ella's wake a song'll sow the dates.
Inside her ship's the isle so's the main.
Electric fans behind the paper gave.
The late trick bands rewind the newest tapes.
Remind us at the fatal hour's grave.
The kettle's sour with fermented grapes.
Soufflés arise across the metal hill.
Surprise accrues in orbit like a meal.

Posted by Setsuled at 11:57 AM
Email ThisBlogThis!Share to TwitterShare to FacebookShare to Pinterest