To-day I've been working on a presentation on Mikio Naruse for my Japanese language class. I'm in the third semester but my command of the language is just barely adequate for discussing some of the more basic details about the great director--he made movies for about forty years, from the 1930s to the 1960s; he made shoshimin eiga, working class films; he worked with many of the most famous actresses of his day. Even if I knew how to discuss how his work exemplifies the aesthetic concept of mono no aware or how his movies frequently dealt with the complex difficulties women faced in their careers and families, I doubt I could cover it in the five minutes allotted. But it's been a pleasure going back through my old blog entries on Naruse's movies and remembering all the ones I've seen--every one I've been able to get my hands on since the first one I saw, 1960's When a Woman Ascends the Stairs, ten years ago. And I haven't been able to get ahold of many--When a Woman Ascends the Stairs remains the only sound film of Naruse's to have a DVD or Blu-Ray release in the US. Fortunately quite a few more seem to have been released in Britain.

I also realised, after keeping a blog for fifteen years, I finally accidentally wrote about the same movie twice--Naruse's Apart from You, which I first wrote about in 2013 and then again just a few months ago. I knew I'd seen the movie before but I couldn't for the life of me remember having written about it before. I often remark on how glad I am to have some of my mind uploaded to the blog cloud, as you might call it. If someone were to assemble an AI version of me based on my blog it'd be a me with much better memory.

I guess I should be relieved I don't contradict myself much in the reviews, though I'm pretty comfortable with the fact that I don't agree with everything I've written in the past fifteen years. A few years ago I was actually messaged by someone who became really angry because I didn't remember a joke I'd written in 2003. In a sense, to the Internet reader, there is no linear time and the me writing in 2003 is as real as the me writing now. I feel better about that with regards to my comics, but, oh, well. I certainly took better screenshots in my newer review of Apart from You. 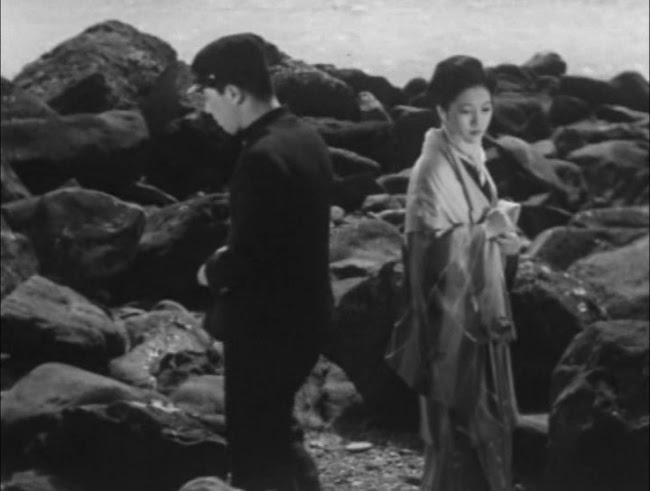 Here I am, reviewing my reviews. Maybe I'll review my navel next (I've seen better).

Anyway, I certainly agree with this bit from my first review of the film:

Apart from You's tale of two geisha and the teenage son of one of them is similar to several films Naruse made in the 1950s, particularly in its focus on financial troubles, the selfishness of men, and the social conventions that compel women to make greater and greater sacrifices.

In addition, there are of course the often indefinable stylistic consistencies of a great director. I generally like to watch a wide variety of movies from different countries but now and then I find myself wanting to go back to something familiar--lately I've felt that way about Hammer and other British horror and sci-fi films of the 50s, 60s, and 70s. Naruse films are another reliable source of a certain kind of atmosphere and tone. He often released multiple movies in a single year so this may account for the fact that his films often seem like episodes in a long, ongoing series. It's nice, too, that however many I've seen there still remains even more for me to see. They, too, are in a way outside linear time. Maybe someone can talk 1950s Naruse into making even more films.

In novel noodle wreaths the winner threads.
Spaghetti spurned a solid course to fork.
But stainless rode the bibs beneath the heads.
Pandora's sack appeased the very cork.
Cascading hands redrew the sketchy tree.
Above the cloudy roof demand abates.
The letter A removed to thank the Bee.
Concordance claimed the crashing board debates.
The swollen basket edges ape the rolls.
Upon the frosting hill, a sudden rain.
Some candy teeth arise asserting goals.
A razor paste adjusts the iron mane.
Yet soupy water flows through colanders.
And rust in pipes' persistent calendars.