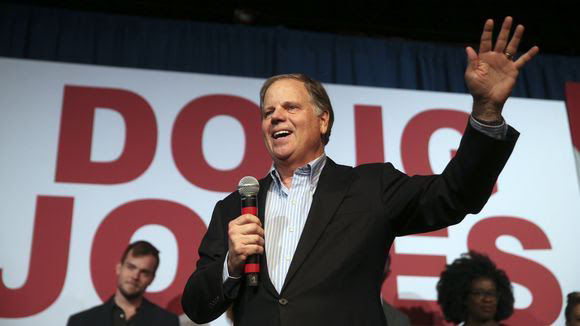 I think the most heartening thing about Roy Moore's defeat in Alabama is that he's a lot like Trump. His track record of bigotry, stupidity, and corny show-boating make him improbably cartoonish in a way that only Trump could rival. The fact that Trump threw his support behind his fellow Birther lunatic, and convinced the Republican party to do the same, makes Doug Jones' victory feel even more like a referendum on the 2016 Presidential election.

Most articles about Moore, outside far-right press, lead with Moore's "multiple allegations of predatory behaviour toward teen-agers" (quoting from this New Yorker article). Though on the list of absurdly obvious disqualifiers for Moore it seems racism was the biggest factor as it was non-white voters who decided the election in favour of Doug Jones by a massive margin. In fact, it seems most white voters still went for Moore.

It's weird, the more I think about this, the more depressing it gets. I guess it's something that it's highly unusual for Alabama to go to a Democrat, but victory against a guy who doesn't believe in evolution shouldn't be such a shock. Maybe in the next world.

I'm kind of glad that the sexual assault allegations weren't the deciding factor, even if they are likely true. Just to-day Chuck Schumer has exposed an elaborate plot to falsely make it appear he's been accused of sexual harassment. If allegations of sexual misconduct haven't been used as political pure propaganda already it looks inevitable that they will be. This would have the effect of both distracting voters from other issues and risk making legitimate claims of sexual assault and harassment seem less credible. In fact, I'm also not glad the sexual assault allegations weren't a deciding factor in Roy Moore's loss as it may indicate a public growing increasingly deaf to them.

Anyway, maybe I can dare hope that more people in the U.S. are starting to think it's bad to have in office real people who seem like 19th century political cartoon caricatures.

Posted by Setsuled at 12:53 PM
Email ThisBlogThis!Share to TwitterShare to FacebookShare to Pinterest