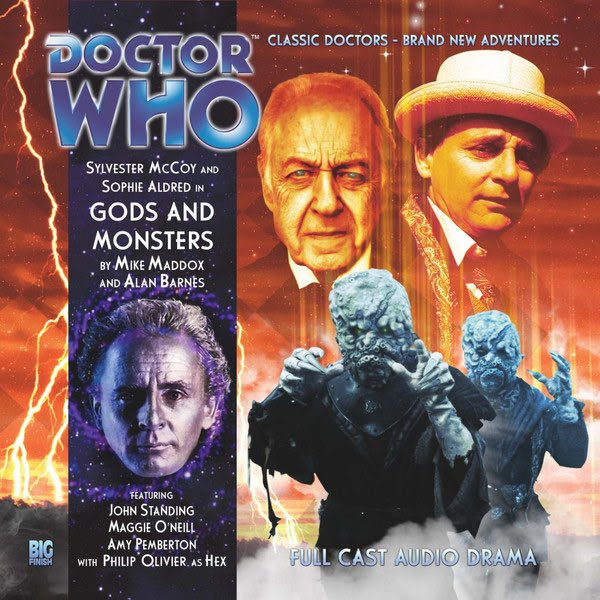 Norse mythology is better represented in the 2012 Doctor Who audio play Gods and Monsters than it was in the previous play, Black and White. Directly following up on that one, Gods and Monsters brings in Fenric of the great television story Curse of Fenric, a being presumably based on Fenrir. In Gods and Monsters he's also tied to Lovecraft's Elder Gods, a connexion apparently having been made in a prose story already.

Chess is involved again, as it is in Curse of Fenric, with cosmic stakes and pieces being represented by real people. This time the Doctor (Sylvester McCoy) might be in over his head, though it being Seven, you can never be sure. Sophie Aldred as Ace is particularly good in this one, both fun in her quips about a certain god looking like Freddie Mercury, but also coming off quite sincere, especially later in the story when she becomes angry over the apparent death of a friend. Most of the story is set on a peculiar flat world where Ace, Hex (Philip Oliver), Sally (Amy Pemberton), and Aristedes (Maggie O'Neill) turn up in the TARDIS, still trying to find the Doctor. There are interesting clues presented, including dead people with guns that only women can fire, rendering Hex useless among the group.

Other Elder Gods are introduced and one moment has a very clear nod to Lovecraft when Hex describes one God's appearance as having both wrong geometry and non-existent colours. You can sort of do wrong geometry on television but made up colours are something an audio play is definitely better suited for.

Posted by Setsuled at 4:32 PM
Email ThisBlogThis!Share to TwitterShare to FacebookShare to Pinterest