Love on the Back of the Planet

Sometimes when I'm drunk I tend to wonder
Why the music stops when I close Winamp.
Lily mailboxes are filled with plunder.
And every word is dramatically damp.

It amazes me that, having slept in to 11:30am to-day, I feel like I overslept. Actually, I think I woke up at around 8:30am and spent hours trying to get back to sleep in order to get a decent eight hours.

I'm vaguely remembering a dream of being at Parkway Plaza, a local mall, with my family, buying dinner at an insanely expensive restaurant inside, and ending up having to pay for the plates and cutlery as my mother wanted to eat at home but wanted the whole experience of the restaurant.

I think I also had a dream about Winona Ryder in some kind of makeover movie where she got bags removed from her eyes to win the love of Jonathon from Buffy the Vampire Slayer--I watched the fourth season episode of that show where Jonathon casts a spell to make everyone in town think he's a superstar. Easily one of the best episodes of the season, which is starting to feel kind of aimless. These "off-topic" episodes, like "Hush" and the Halloween episode, have been much better than the secret military story arc. It almost seems like the writers' creativity comes out of the frustration of being saddled with Riley and Adam, the good and evil poles of bland in the world of season four.

I guess I'm responding better to the Willy/Tara relationship this time. Or rather, I have an easier time pinpointing why it doesn't work for me. I like Amber Benson, and there are still vestiges of the Willow I like from the first couple seasons, despite her current wardrobe atrocities; 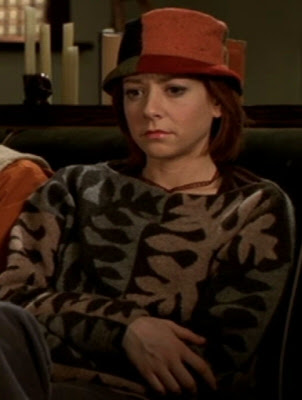 But there's something so stiff and inorganic about their chemistry. The characters don't quite behave like people--I mean, when Tara tells Willow she's "yours", Willow just kind of smiles. Now, here's a girl who always considered herself straight, who was bothered a little when her alternate universe vampire self may have been "a little gay", but she seems to feel not the slightest bit of anxiety about being in the beginnings of a lesbian relationship. Her reactions to the little moments between her and Tara are so oddly subdued it ends up being unintentionally disturbing, like she's some kind of high-functioning zombie.

Romance in the Buffyverse has always been kind of, I don't know, sort of ritualistically awkward. I mean, what happened to the supposed irresistible attraction between Willow and Xander that completely evaporated when Cordelia and Oz found out about it? It's like it was there just to piss them off. It's totally gone after that reveal and, more importantly, no-one finds it strange that it's totally gone after that. Maybe this is all just inevitable pitfalls of ongoing stories on television.

At least last night, when Willow and Tara were parting after a walk home, I really wanted Willow to kiss Tara, I mean, not in a "this is how it should've been written" kind of way, but more in a "when are these two gonna realise how they feel about each other" kind of way, which is good.

Though, now that I'm alternating each night between Angel and Buffy, I'm finding myself increasingly looking forward to Angel nights. Even the pretty prefab underground gladiator arena episode I watched a couple nights ago went down a lot smoother than the Buffy episodes. However, I will say Faith waking up, and having the flashbacks with the mayor, were some very welcome respites, too.

And it occurs to me that the best relationships on the show, to me, have been the creepiest ones--Faith/the mayor, Faith/Buffy, Buffy/Spike. Maybe every good love needs to have something major wrong with it.
Posted by Setsuled at 5:12 PM
Email ThisBlogThis!Share to TwitterShare to FacebookShare to Pinterest