I went to a Japanese restaurant yesterday to work on the script for the next Venia's Travels, but some college kids were having a noisy party and I ended up just doodling in the margin of my notebook; 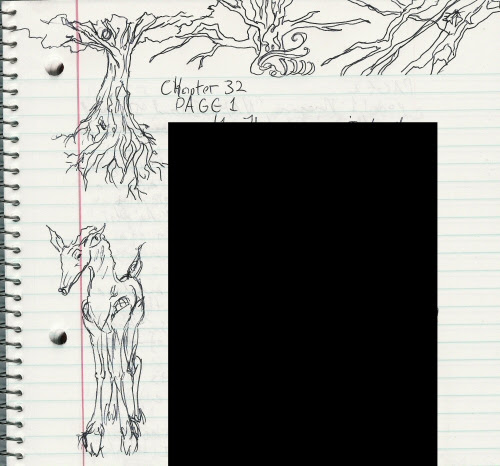 I blocked out the actual bits of script I did eventually write when I parked in the Fashion Valley mall parking garage. There was a time I used to do nearly all my writing and drawing in my car, generally parked in garages or under trees at college. The return seemed to help yesterday as I finished a script I'm very happy with.

Of course, there's a lot more space in my car since I cleaned it out last week. Among the layers of things I hadn't seen for years, I found a black leather bag with this guy inside; 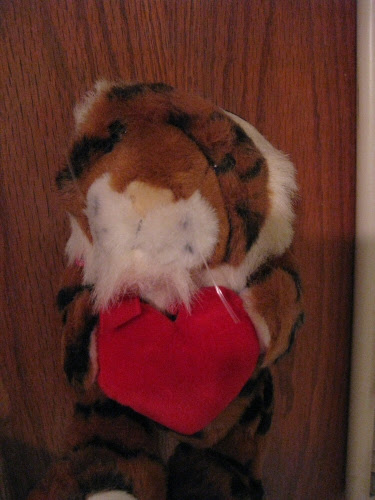 He was a gift from someone and, the sentimentalist I am, I feel really bad for neglecting him. He seems mostly intact, although the glue seems to have bubbled up around his eyes like tears. I also can't help fancying this as some cosmic message about my love life, that all my problems are actually due to something precious I was entrusted with and totally forgot about. Of course, this theoretical metaphor wouldn't have such an effect on me if I didn't usually have the dim, glum feeling my basic M.O. with girls was totally flawed in some way I was fundamentally incapable of perceiving. Useless paranoia. I found other gifts from girls back there, too, but this one made me feel the saddest.

I watched the third episode of Bakemonogatari this morning. Somehow it never occurred to me before how much Akiyuki Shinbo's style is influenced by Hideaki Anno in his use of flashing title cards that both explicitly state a character's thought process, mood, or unspoken preoccupation, but also serves to convey these with speed, colour, and design. I suppose I wasn't reminded of Anno so much in Sayonara Zetsubo Sensei or Maria Holic, because the title cards were used typically for comedic and/or aesthetic effect exclusively, while Bakemonogatari uses them almost exactly the way Anno did--I particularly thought of Anno during this scene from the end of the second episode;

Senjogahara's placement in a white void as a reflection of her psychological state, the relationship with her mother, and the odd inserted bits of live action footage, are all reminiscent of later Evangelion. The episode previews are spoken by the lead character's hyperactive younger sisters, much like His and Her Circumstances.

But I found the juxtaposition of Senjogahara's retained psychological trauma from past sexual assault with the implicit sexual fantasy of shounen to be somewhat awkward. Senjogahara doesn't feel as real as the women in Evangelion, which results in a seemingly unintentional fetishisation of trauma resulting from sexual assault.

I'm quite comfortable knowing there are groups of anime and manga consciously aimed at demographics of sexual orientation. There's a reflex in a lot of people nowadays to be ashamed of an attraction to characters or images onscreen. I say it's perfectly natural. But I get irritated when people seem to forget this is happening. When I was telling Tim about the josei (for women) series, Honey and Clover, Tim told me a bunch of people on the 4chan anime forums had been complaining about how it was "gay". And you know they didn't mean the word simply to refer to a viable lifestyle. They simply failed to grasp or appreciate there are other demographics out there with different natural impulses that aren't inherently better or worse than their own. I get as irritated by girls who feel reflexive disgust when guys display attraction to women's bodies. There's really no excuse for adults to-day to be so wrapped up in themselves their imagination can't stretch to the point where they can accept different people like different things and there's nothing sinister about it.

Anyway, I wish Bakemonogatari were a little more honest with itself. When Senjogahara walks up to Araragi unselfconsciously naked or when she offers to make him breakfast every day wearing nothing but an apron, that's a fantasy for people who are attracted to women. It's annoying when Araragi then chooses to act shy and dismissive like a real teenager. Annoying to me, anyway--I know a lot of the shy people watching might need it to identify with, and I know a lot of girls love the idea of making guys uncomfortable with their sexuality. But I'm just completely fatigued by the guilt and shame moe. If this were just a realistic character study, that would be fine, but don't show me a beautiful naked girl and try to tell me I should feel guilty about enjoying the sight.

But I can't say I'm altogether hating the show. I loved the use of the Japanese word that can mean either weight or feeling--that Senjogahara's quest to reclaim her weight was also a quest to reclaim the buried, negative feelings created by her unhappy relationship with her mother.
Posted by Setsuled at 7:56 PM
Email ThisBlogThis!Share to TwitterShare to FacebookShare to Pinterest