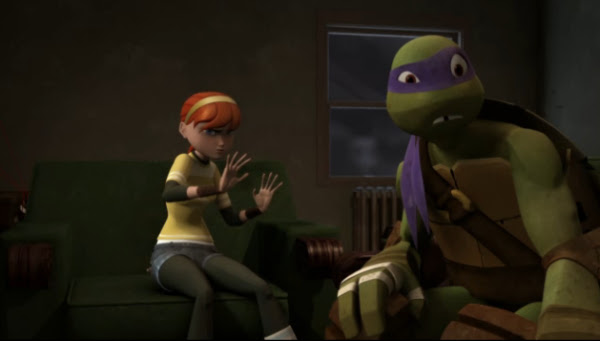 I watched because the io9 article mentioned the episode features the characters going to an alternate dimension where they encounter their 1980s counterparts from the original animated series. 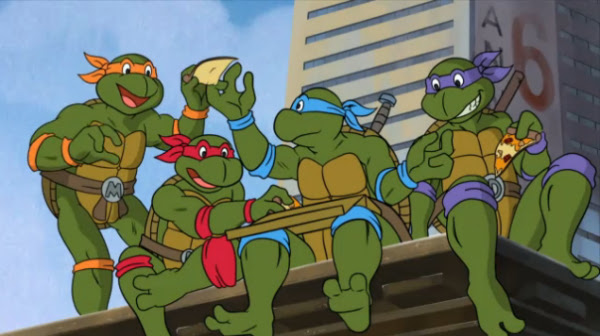 The visual style of the old series is faithfully emulated for these scenes except for the fact that it's not completely lousy. Voices don't occasionally come out of the wrong characters and the characters aren't bound by over recycled animation cells with numerous visible painting errors.

The new show is very badly written, filled with stupid jokes and stapled to limp plotting. But it was better written than the old series.

I sure liked Teenage Mutant Ninja Turtles when I was a kid. It's hard to say why. Well, maybe it's one of those things you have to be a kid to understand. I think a lot of the appeal it had for children was that adults didn't understand it, and a kid could vaguely identify with being this weird mutant thing that likes pizza.

This is why the reboots will never work, of course. I found myself thinking it would be kind of interesting if someone made a rated R Turtles. I know I'm not the first to imagine this. But I don't mean just Ninja Turtles with sex and violence. I mean Turtles who share extensive knowledge of the New York sewer system featuring realistic portrayals of accidents revolving around sewer gases, encounters with dying and drunken homeless people. A Donatello whose technical knowledge is as intensely realistic and researched as an Isaac Asimov story, an adherence to historically authentic ninja codes, a Michelangelo who has a vast bong collection and a laid back, zen attitude when talking to a woman whose children have just been massacred by Shredder. A Leonardo who's faced with having to allow some buildings in New York to collapse on his friends and kill them so that he can get some people to a shelter which also collapses and kills them. A cynical, bruised Raphael with a liver problem who contributes to WikiLeaks. Maybe that's what my generation needs.