The Emperor of Pizza 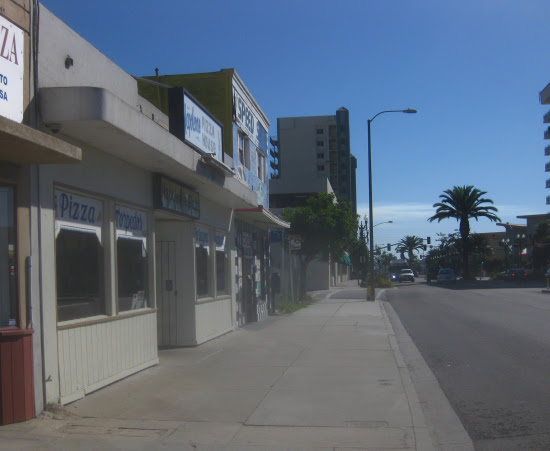 After I took a test in my health class to-day about nutrition and calories and proper diet, I treated myself to possibly the greasiest lunch I've had in twenty years at Napoleone's Pizza.

The picture above is from when I went there a few months ago on a day when the place was closed--I didn't take any pictures to-day. I felt too many surly eyes on me from the patrons who were more appropriate for the very place where a teenage Tom Waits pushed a broom in the 60s than I'd expected. When my sister told me the place was listed among trendy spots in a magazine, because Waits had worked there, I expected it to be filled with college aged hipsters. Maybe it was because I was there before noon but the only people I saw were a glum, attractive young couple (man and woman) in military fatigues in a booth, three quiet over-50 cops, and a couple of old men whose discussion about the music industry soon distracted me from reading the Nibelungenlied in my booth.

The other one started talking about a "producer who always put himself in the artist's shoes. They all loved him. If David Bowie wanted three hundred doves to fly out of the stage he made it happen. Didn't ask questions. And he'd get artists bookings they'd never have had before. Lady Gaga, he got her playing in Barcelona and Rio De . . . Rio Deja Nero."

Napoleone's eating area is divided by a wall. On my right hand as I walked in all I saw was a deserted room with long tables with empty white table clothes. On the left was the sparsely crowded room with tables and cheap red upholstered booths. Most of the light was coming in from the windows and I could barely make out a couple cooks standing behind a kitchen bar in the back. "You dining in?" a short, middle aged red headed waitress asked me but I was seated by a slightly heavy blonde middle aged waitress with too much makeup. No-one working there looked under 50.

The menu was a folded piece of brown paper that said the place was opened in 1958. I ordered a ten inch vegetarian pizza and waited about ten minutes for it. "Pizza time," said the waitress when she brought it out. It was good--I generally like a thicker crust but while this was thin it was still fluffier than the cracker crusts that seem to be popular nowadays. It was light on the green bell peppers and had a lot of black olives which is just how I like it.