Destruction Wrought by Strength of Heart 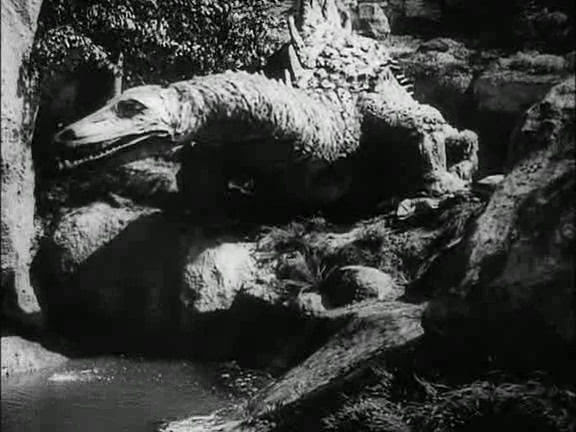 Life can be pretty simple until humans get involved. Young Siegfried has a happy childhood, becoming a great swordsmith by the time he reaches adulthood and from there he enters the woods alone to embark on a career of dragon slaying and treasure hunting. But like the epic poem upon which it's based, Fritz Lang's beautiful 1924 Die Nibelungen is more about the torment Siegfried and the woman he loves are put through when the honest young man of the woods finds himself hopelessly lost in the forests of human deceit and cowardice.

Die Nibelung is two films, over two hours each for a total run time of around five hours. Miraculously, both films survive to-day in their entirety. The poem is rather naturally divided into two parts since the first half of the poem differs in tone rather drastically from the second half. The first film, like the first half of the poem, is focused on Siegfried and so is called Siegfried. 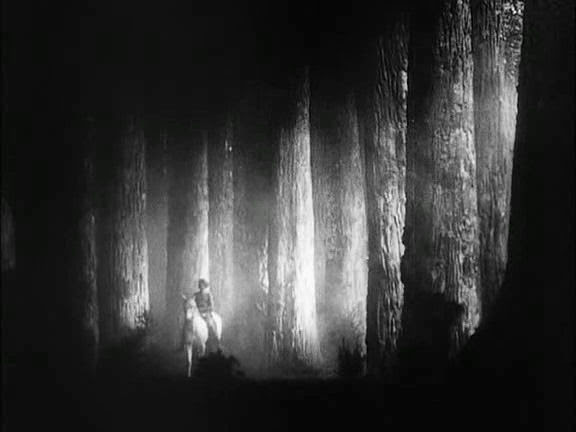 Unlike the poem, Lang begins with the young Siegfried (Paul Richter) in the forest and covers his exploits killing a dragon and finding the Nibelung treasure, as in other versions of the myth and Wagner's operas. The special effects, as you might imagine from the director of Metropolis, are impressive. The dragon moves forward, drinks from a pool, breathes fire, and even bleeds when Siegfried stabs him. 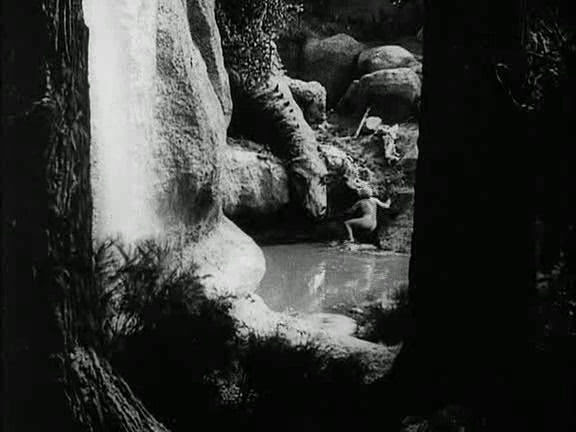 Even more impressive, though, is the film's visual beauty, its Expressionist use of darks and lights sometimes subtle, sometimes severe and always leading to gorgeous compositions. I loved a few shots Lang put together of actors in the foreground in bright light with an actor behind in shadow, as in this shot of Kriemhild (Margarete Schon) in the foreground and Hagen (Hans Adalbert Schlettow) behind her. 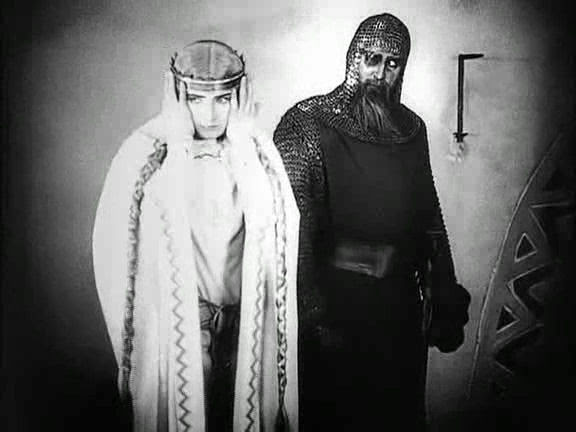 This is one of my favourite scenes from the poem because it seems like such an insightful example of bad faith--an existential concept wherein someone unconsciously behaves in a manner opposite from their true beliefs, accepting the word of someone, consciously believing them, even though at some level they realise the person is lying. Hagen asks Kriemhild to sew a cross into Siegfried's tunic in the one spot where his skin is vulnerable, the rest of him having been made invulnerable when he bathed in the blood of a dragon. Hagen says it's so that he can know where Siegfried needs to be protected in case they're attacked on the upcoming hunt. She does as she's asked, saying how Hagen is "truest of the true" in the movie. He is the most respected vassal to her brother, King Gunther (Theodor Loos). The fact that what Hagen tells her is so obviously false manifests in portentous dreams she has and tries to warn Siegfried of before he goes on the hunt. 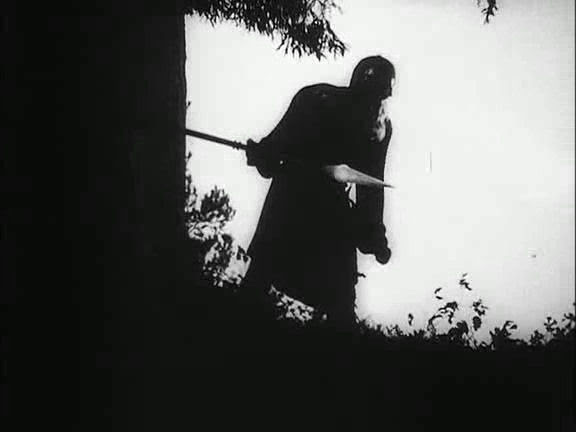 This shot of Hagen stalking Siegfried is amazing--I love how Lang puts everything in silhouette but has light reflecting precisely off the tip of the spear.

The reason Hagen is moving to assassinate Siegfried is Kriemhild revealed to Brunhild (Hanna Ralph) that it was Siegfried in the guise of her husband, Gunther, who first passed the three tests of physical strength Brunhild required of her suitors and then forced himself on her sexually after she refused to sleep with Gunther on their wedding night. The sex is less explicit in the movie, Siegfried takes an armlet from Brunhild instead of a girdle. 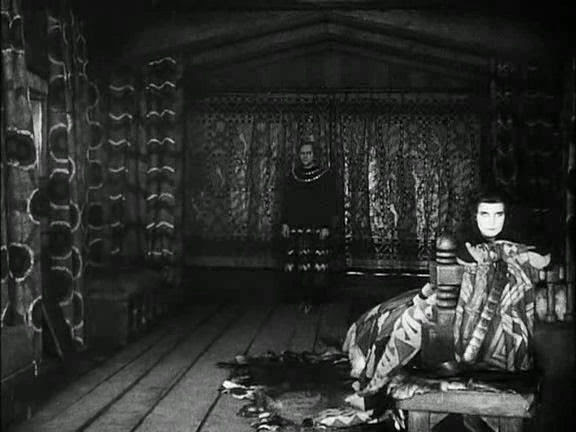 Siegfried is happy to win the feats of strength for Gunther but is reluctant to force himself on the woman on her wedding night, doing so only because he and Gunther had earlier pledged loyalty to each other in a blood pact. The subtext, which is much less apparent in Nibelungenlied but clear in Wagner's opera and in Lang's film, is that Siegfried has grown up learning that violence is a simple solution to any problem he comes across. So he has no reason to be hesitant in pledging his love and loyalty to Gunther and, later, can't yet see violence as a bad enough thing to prevent him from keeping his word to Gunther. The actor playing Gunther is appropriately wide eyed and wimpy. The irony is that Gunther has no compunction about betraying Siegfried and Hagen is even less hesitant. Hagen has one eye in the film, linking him, as in Wagner's operas, to Wotan, making him a sort of human surrogate of the god who isn't mentioned in the poem or film. Like Wotan, the buck seems to stop with Hagen, actions being deemed good or evil by the men of Burgundy depending on whether or not Hagen approves. But as a mortal, Hagen's idea of justice seems to lead to more chaos than the rule of Wotan, which is borne out in the second film.

Both films are public domain--here's the first on YouTube:

Posted by Setsuled at 1:33 PM
Email ThisBlogThis!Share to TwitterShare to FacebookShare to Pinterest