One of the ways in which Melville satirises the Byronic Hero in Moby Dick is to make Captain Ahab look ridiculous at times, as when Ahab finds himself in the humiliating position of having to figure out how to board another ship with his false leg. The point being however grand and powerful Ahab sees his quest he's still forced to contend with small, mundane human circumstances. On Breaking Bad, Walter White is made to look ridiculous often enough--by the middle of the second season, one is well acquainted with the sight of Walter in his underwear. I can't really speak much about Breaking Bad since I have yet to watch the fifth season. But if the show has intended by this point to make Walter's decision to become a meth cook seem in any way bad it hasn't succeeded. The show makes Walter's life as a law abiding citizen at the beginning of the series seem so humiliated and empty, largely because of the implicit American ideal that a man should be able to support himself and his family with his prestige measured with money, that we hardly blame him for taking the route he does.

The show portrays many problems in the American system--the untenable expense of healthcare, the counterproductive and hypocritical laws regulating drug use. But it seems more to say that system inhibits capitalist enterprise than that capitalism is inherently wrong or that founding one's self respect on financial freedom is a flawed point of view. Stories of the Super Anti-hero seem to make obligatory nods to the wrongness of what their character is doing but one senses less and less enthusiasm in it.

One needs to look to television for the frontier on this movement as a shift has occurred in the realm of motion picture media away from the cinema being the theatre of artistic exploration. But one can see some hints of this trend growing in the blockbuster, from Batman not having to let Ra's al Ghul live at the end of Batman Begins to Superman killing General Zod in Man of Steel. Both films were written by David Goyer and both killings occur as the climax of the film, the moral shift in how the characters are traditionally played clearly meant to please the audience in a way they do not expect. It works because American audiences have completely lost touch with why it was so important Batman or Superman never killed anyone.

More and more, I think about how Revenge of the Sith was really the Star Wars appropriate for this generation. Whatever flaws that movie has, I think George Lucas is due some credit for the courage to show his anti-hero walking into a school and slaughtering children in a time when school shootings seem to have become an epidemic. Those who cry for the cool power of going against the social codes ought to be reminded now and then how very, very ugly it can be.

Some, like the Hound on Game of Thrones, believe this is excusable simply because it's how the world works. I guess it's time I talked about Sunday's Game of Thrones. Spoilers past the screenshot. 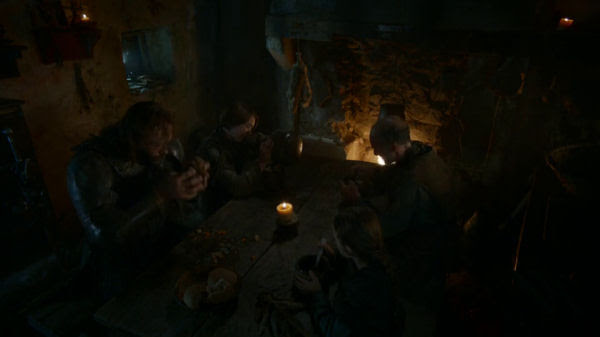 It was good to see in the episode finally the voices of a couple of the peasants who are supposed to be following all these kings and nobles, however briefly we hear those voices. We still don't really learn much about them.

Mainly I want to talk about what everyone else is talking about in the episode--a scene that was changed from a depiction of consensual sex between Jaime and Cersei in the source material into a scene depicting Jaime raping Cersei. 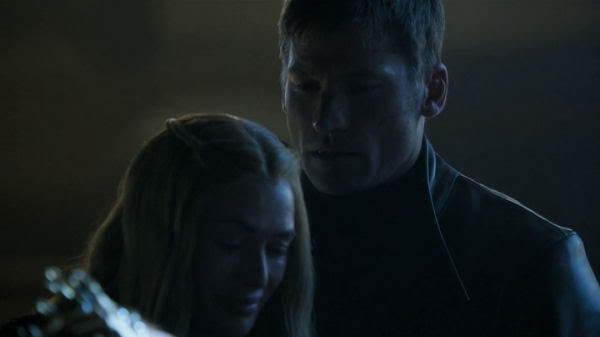 It is fascinating how upset people are over this particular transgression on Jaime's part after we've already seen him commit multiple murders, shove a small child out of a tower window, and have sex with his sister. People mainly seem to be upset by the fact that Jaime is supposed to be on a redemptive arc--as the underdog when he was a prisoner being transported to King's Landing and seemed to be learning some hard lessons while seeming to feel a growing love and respect for Brienne, going out of his way to protect her, one naturally begins to feel sympathy for the guy.

His crippling of Bran happened when we barely knew him and the murders he committed could be considered necessities of war and the people he killed were people we barely knew. I think the reality is that people consider his other actions forms of acceptable selfishness.

I suspect I'll ultimately see this change in the story made by the show writers as being a mistake--it's hard to imagine such a big change not sitting oddly next to other things faithfully taken from the source material. But I think it's good to remind people that selfish, barbaric behaviour is sometimes very ugly.

Posted by Setsuled at 1:02 PM
Email ThisBlogThis!Share to TwitterShare to FacebookShare to Pinterest