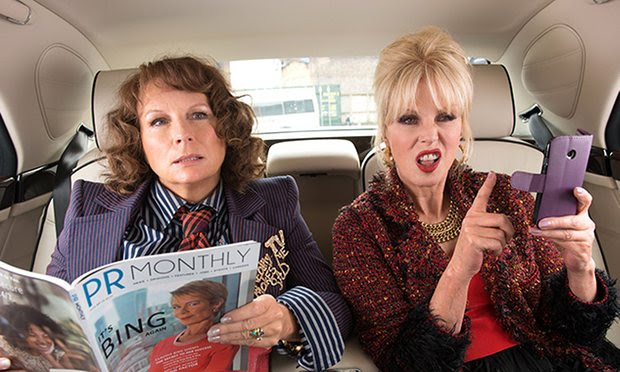 Whether it's Archie Bunker or Gul Dukat, no matter how despicable a character might be, if they're well written or performed, sooner or later you're going to start to like them. Because people are people, not villains, and if you want to write people properly you can't keep them in that box. The problem is, if you start to like a character too much, you forget that the fact that they were despicable was part of what got your attention in the first place. See Scorpius on Farscape or Merle on The Walking Dead--in both cases, though, the stories involving the characters weren't bad after some of their more reprehensible qualities dissolved. 2016's Absolutely Fabulous: The Movie returns us to the world of decadent antiheroes Patsy Stone and Edina Monsoon and for the most part their tastelessness has been as blessedly preserved as Patsy's face. The film stumbles when it indulges in sentimentality for the characters which manifests in fairly typical slapstick gags. But moments like Patsy telling a Rebel Wilson she's wetting herself in a threatening tone or Edina off-handedly telling an assistant to fix her "broken" credit cards make this an enjoyable trip.

According to Wikipedia, Margaret Cho has denounced the film for "yellowface", for having a white actress, Janette Tough, playing an Asian character, a fictional fashion designer named Huki Muki. I'm not sure why Cho is so sure the character is meant to be Asian--given cross dressing, cosmetic body modification, and disguise are a big part of the film, it's not unreasonable to think it's a white character identifying as Asian. In fact, the film has an unambiguous satire of Rachel Dolezal, the white woman who claims to be black in an apparent attempt to identify with black American cultural history. Her spouse is a transwoman in the early stages of transition, the barely suppressed joy with which she discusses her spouse's upcoming genital removal makes one wonder how much the fellow actually wants to transition. I was reminded of Mrs. Jellyby from Charles Dickens' Bleak House who is obsessed with sending aid to a distant community in Africa while she completely neglects her own family.

Mark Gatiss appears in one of the film's most unlikely cameos as a publisher to whom Edina is trying to sell her memoirs, which consists mostly of pages with "blah blah blah" written over and over. Edina can't understand why this book is not considered acceptable for publication. Edina has worked in PR all her life so it makes sense that to her selling the product is far more important than the product itself. Or rather, the sell is the product.

Obviously, this is very broad satire but the world of high fashion depicted in the film as Patsy and Edina make cutthroat grabs for fame and fortune makes the film a sort of companion to this year's The Neon Demon. Yet the humanity of the characters is much more in evidence as when Patsy's asked why she goes to so much trouble to help Edina she replies that it's "fun". There's a real lust for life in the characters that supports Saffy's oddly emotional karaoke scene in a drag queen bar and a cover of Bob Dylan's "This Wheel's On Fire", the show's theme song, performed for the film by Kylie Minogue.

A chase scene in the south of France and drama involving the possible murder of Kate Moss feel pretty run of the mill but otherwise Jennifer Saunders, who plays Edina, has a written a screenplay that's a refreshing parody of politically correct hypocrisy reminiscent of John Waters but with a little more heart. Joanna Lumley as Patsy, though, gets most of the best material and her seducing a wealthy baroness while wearing a ridiculous false moustache is one of the film's highlights that leads to an update of a famous gag from Some Like It Hot that suggests society has not only come full circle but is drifting quite away from any solid shape.

Posted by Setsuled at 12:57 PM
Email ThisBlogThis!Share to TwitterShare to FacebookShare to Pinterest