Together Again from Earlier in the Future's Journey into the Past 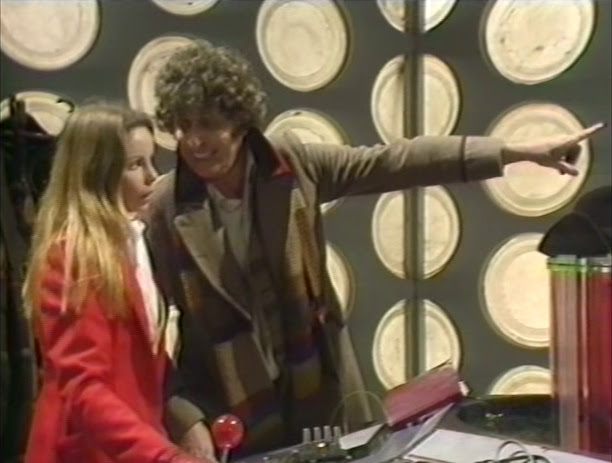 Here's one I'd been saving--not The Horns of Nimon, I'm just using a screenshot from it, but Wave of Destruction, a nice new Doctor Who audio play from January this year, the first in a Big Finish series that reunites Tom Baker and Lalla Ward as the Doctor and Romana, respectively, for the first time in over thirty five years (unless there's something I'm not thinking of). As they are my favourite Doctor and Companion combination, I was excited but I managed to keep my expectations low. Not only do they have new writers--Justin Richards in this case--they have the baggage of a real life divorce. Much of their wonderful chemistry came from an unrepressed attraction between the two actors in the years leading up to their marriage. Now, Lalla Ward has been married to Richard Dawkins for quite some time while Baker has been married to Doctor Who assistant editor Sue Jerrard. So their natural chemistry isn't there--mainly Romana sounds a lot grouchier now and Four a little more sedate, but then he was always pretty laid back.

In an interview that accompanies the release, Richards talks about consciously imitating the Douglas Adams era of the show which featured the Doctor and Romana's best episodes. In an opening scene with banter about a crossword puzzle with throwaway lines (like where the Doctor wonders about the solution to the puzzle and Romana says it'll probably be in to-morrow's paper--before handing him to-morrow's paper) captures something of the idle vacationing time traveller rapport we see between them in City of Death or Shada. But there's more humour relying on Romana being irritated, as when the Doctor suggests she and another woman investigate by "patronising" some shops while the men go to the the source of the trouble and Romana gripes, "Patronising is right." I was reminded of how her rapport with the other Doctors in other audio plays has fallen flat. In those, she's always played an older Romana for some reason and I guessed Lalla Ward felt she was unable to play younger at this point. It's true, you can hear some of her age in her voice, though I think the hardcore fanbase, 99% of the audience of Doctor Who audio plays, is more than willing to look past that (I know I am). I think she replaced Mary Tamm, the first incarnation of Romana (as a Time Lady, she regenerates like the Doctor does), for this audio play at kind of the last minute due to Tamm passing away recently.

Wave of Destruction finds the Doctor and Romana in 1960s Britain, tracking down a pirate radio station, referring to New Musical Express or NME (The Doctor: "What 'enemy'?") in the process, and figuring out how a malevolent alien race is using the broadcasts to control human minds. Most of the story has the Doctor and Romana separated so there's not much opportunity for their back and forth but Richards keeps things enjoyable clever at all times. I'm looking forward to hearing more of the audios Baker and Ward have done for Doctor Who this year.