An Analogue Splinter in the Digital Eye 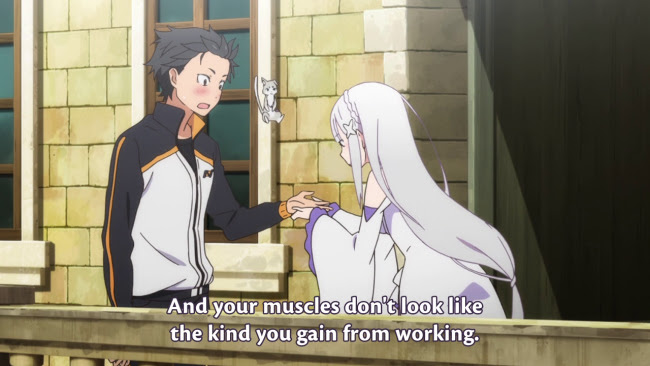 It'd been a while so I decided it was time to dip my toe into the realm of currently popular anime. So I watched the first couple episodes of Re:Zero--Starting Life in Another World (ゼロから始める異世界生活), a popular series that debuted this year. Anime series are being produced constantly now, cheaply and unabashedly recycling devices, which is a big part of why I rarely watch anime anymore. Re:Zero looks cheap and liberally incorporates well worn devices but there is an inventiveness in the dialogue itself that makes it enjoyable.

Among other things, it has the stock fish out of water protagonist--a young man, Suburu (Yūsuke Kobayashi), transported to a magical, vaguely European mediaeval fantasy world, and, in an extremely conventional twist, he's the post-modern hero aware of all the fictional conventions. He talks about how he was probably summoned by a beautiful woman, he probably has magical powers now, etcetera. I wonder when we'll get the post-post modern hero who's aware of being aware--maybe that would be like the protagonist breaking the fourth wall in a flashback seen in the recent Deadpool movie.

The main love interest, though there's the usual harem of potentials, is an unremarkably designed, beautiful silver haired tsundere named Emilia (Rie Takahashi) though, unlike Senjougahara in Bakamonogatari, she's not aware that she's a tsundere, all the post modern awareness being reserved for Suburu so far. Most interesting to me, though, is the show's use of a Groundhog Day style time loop device. 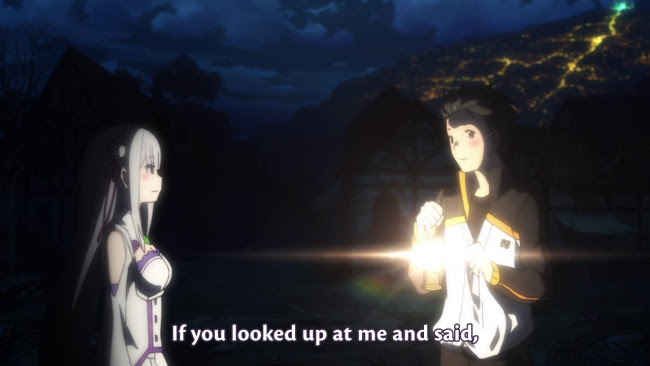 A recent movie starring Tom Cruise, Edge of To-morrow, is based on a 2004 manga called All You Need is Kill. So by way of that manga, the plot device seems to have entered the realm of acceptable, recycled devices in Japanese fiction. Re:Zero begins in the real world where Suburu, at a convenience store, talks about how a fellow needs food after a marathon session of gaming and I thought, the normal experience of the young person nowadays can't be adapted to a story, we have to begin with an unusual break in routine. The experience of playing the video game can't be adapted so the story needs the unusual situation of the character going outside for once. Except, the Groundhog Day device provides a perfect analogy for the gamer's life experience. In fact, the author of All You Need is Kill, Hiroshi Sakurazaka, has cited the experience of a gamer, in addition to Groundhog Day, as being an influence on his work. 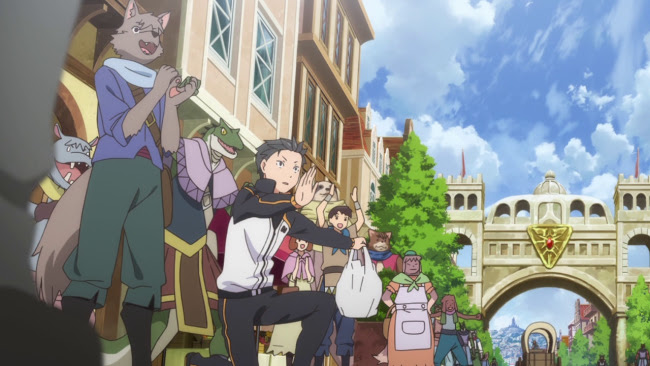 Players being transported into the world of a video game is hardly new--the recent Sword Art Online uses this premise, I think inspired by an episode of Boku wa Tomodachi ga Sukunai. But beyond the comedic potential inherent in pairing video game logic with the real world, like "Anthology of Interest II", an episode of Futurama recently plagiarised by an Adam Sandler movie called Pixels, these shows don't really address the emotional reality of a young adult's life devoted to gaming. The Groundhog Day time loop speaks to the life experience of a gamer on a more fundamental level. 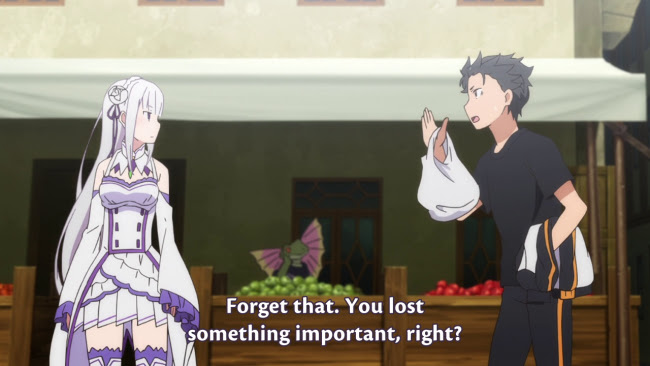 The stock characters in Re: Zero are also like the character types in a Japanese dating game simulator. The concept of games with multiple endings, and the need to obsessively replay a game in order to unlock all endings, is a very familiar experience to the gamer. Having a character transported to the world of a video game is ultimately no different from a character being transported to any other world. A post-modern self aware character who continually interacts with the same stock characters, trying to reach a desired relationship goal like a puzzle, and using experience from previous lives, mirrors the gaming experience exactly. In a sense, this is what Groundhog Day is, though Bill Murray's unique style of performance that seems to exist simultaneously within a plot and outside it is a form of post-modernism that can't be matched. But Groundhog Day is also about the protagonist trying to get the "right" ending. The difference perhaps being that Groundhog Day ultimately shows up the shallowness inherent in this pursuit. 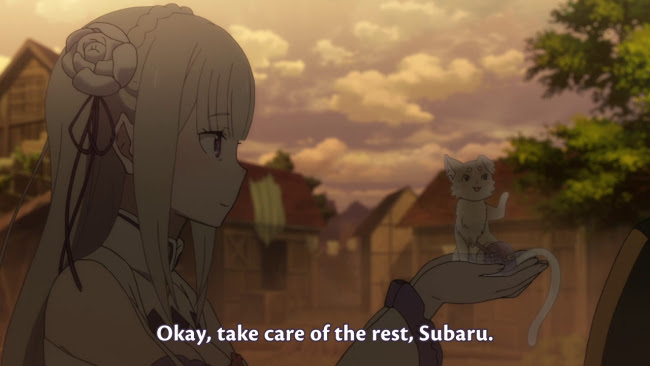 While I think Re: Zero may be shallow, my point in bringing this up is that the human experience of the gamer seems to be fighting for expression almost of its own accord. As much as people devoted to gaming to the exclusion of all other activities might obsessively pursue simplistic plots and repetitive tasks, an inevitably more complex story emerges.