The thing that finally breaks my brain might be Margot Robbie as Harley Quinn in 2016's Suicide Squad. Talking about her and talking about the movie barely seems like the same topic. Every time she was on screen I completely forgot about every thing else like I'd been hit in the head with a baseball bat. It wasn't even until after the movie I asked, "Why would the U.S. government include a gangster's girlfriend with a baseball bat in its covert elite strike force?" The movie is filled with things that don't make sense and sags like a garbage bag with wildly misguided sentimentality in the climax but I did not care so long as I got to watch Harley Quinn.

I could swear her shorts got smaller every time she was on screen. Robbie has a perfect face and a perfect body--and I know, there's a massive minefield in saying something like that and I genuinely love curvy, Christina Hendricks bodies. But Robbie's body and face are like one of those computer generated images that number crunch to find the optimum ratios for proportions based on elaborate psychological testing collated from cultures all over the world. It was the same thing when I saw her in Wolf of Wall Street and Scorsese perfectly cast her as the girl in a room full of beautiful girls that Leonardo DiCaprio's eyes were drawn to like magnets. Because she draws the eyes like magnets and her big eyes and affected accent are perfect for Harley Quinn. But she's not just beautiful; Robbie can play her instrument.

The piqued little head pop when someone mentions "crazy", her high rope acrobatics, her coquettish delivery on the "that's not what they [the voices] really said" punchline.

She overpowers Jared Leto's Joker a bit though I didn't dislike him. Obviously he has a lot less material to work with and Heath Ledger's Joker is an all but impossible act to follow. He functions as Harley's boyfriend and lacks the philosophically motivated destruction that made Ledger's Joker so compulsively watchable or the sheer force of personality that made Jack Nicholson's work. But I liked the visuals constructed around him.

Despite Warners CEO Kevin Tsujihara's recent comment that the DC cinematic universe, contrasted with Marvel's, is "steeped in realism", it's been abundantly obvious in Zack Snyder's two films and this one that they're moving towards something much more deliberately artificial than the Christopher Nolan films and I think Suicide Squad is the best in the line so far. I hear there's something like seven or eight completely different cuts of the film and the final result is a committee created collage of the cuts. The shifts in tone are most jarring in the climax where the team faces off against a villain that, as most reviews point out, is not nearly as good as all the collection of backstories. But what really drags things down is literal drag, when the film gives us a series of slow motion shots that attempt to wallow in a hastily inserted theme about the importance of friendship. If they'd asked me for advice, I'd have told them to go and watch Reservoir Dogs. You want to make a movie about a team of scumbags? That's where you look for inspiration.

Oh, yeah, Will Smith was the star of the movie. He was fine as Deadshot, really the only character who makes sense. He's a hired gun so I can believe he'd work for the U.S. government for the right price and I believe the government might actually want to recruit him. And Will Smith is fine, he just can't compete with Margot Robbie.

Trained as a psychiatrist and then shown living it up with the Joker she somehow has mastered martial arts. Well, okay. The filmmakers evidently felt the group needed a bunch of thugs to fight against so they're confronted by guys who look like Scaroth from the Doctor Who story City of Death. 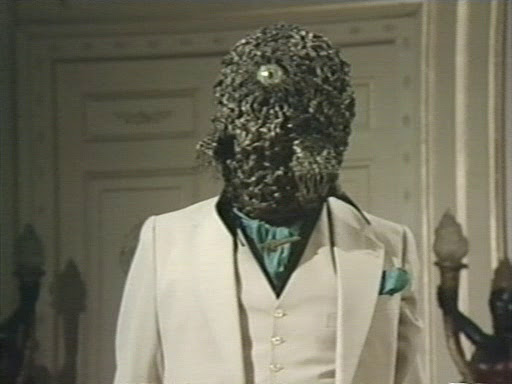 They're less convincing without Julian Glover behind the mask.