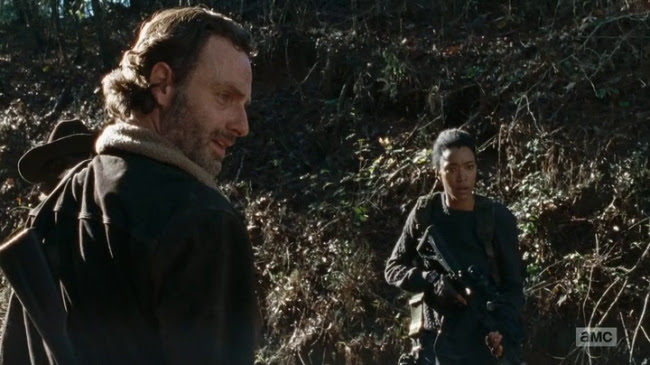 Last night I dreamt only Rick and Carol had survived on The Walking Dead and they had to fight Godzilla. I probably dreamt this because I finally got all caught up on The Walking Dead last night, finishing the terribly written season finale of season six, I'm now ready to be a functioning member of modern society. Are you happy, society? Society: "Why aren't you watching Stranger Things?!" Sheesh, all the running you can do to stay in one place . . . Okay, well, it's Walking Dead I finished last night so it's Walking Dead I'll talk about to-day, okay? Okay. 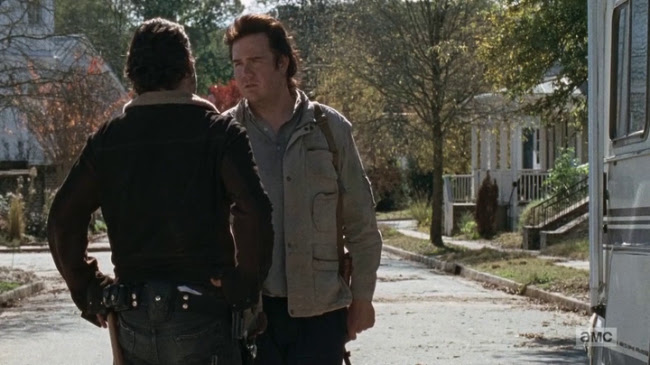 I guess if I had to pick a moment when the show jumped the shark, it would be when Eugene bit the guy's genitals in episode fourteen, "Twice as Far". I get it, Eugene had to pull what in wrestling would most certainly be an illegal move because it was a desperate situation. But the guy in question was wearing jeans. Presumably with a zipper. I'm supposed to expect Eugene found purchase? And he wasn't immediately shot dead? It's bad enough when things don't add up, it's worse when it's over someone's dick getting bit. It just makes it that much more embarrassing.

But I'm not one who looks at the shark as being some ultimate barrier that, when jumped, can never be unjumped or, I guess, circled back around on the skis or whatever Fonzie did. No Doctor Who fan believes a shark jump is forever. And although episodes of Walking Dead's season six written by Matthew Negrete are easily identifiable as the weakest points in the season, even they had some nice moments. I liked Denise discovering the zombie woman puddle and her sink baby, even if it didn't make sense for her to go into that room alone. It was damn creepy.

The season certainly had some very high points. I'd been wondering why the hell the question of Rick and Michonne being together had never been broached--the writers must've had an epiphany after the mid-season finale about it and almost immediately in "No Way Out" they killed off Rick's boring love interest, Jessie, and her annoying kids then put him with Michonne in the very next episode. That was nice. 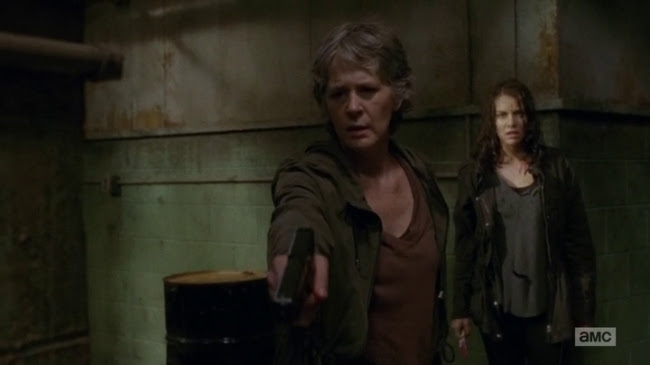 I really loved "The Same Boat", written by Angela Kang, where Maggie and Carol are captured by a group of Saviour women led by Alicia Witt who I'm happy to see is reprising her role as Gersten Hayward on Twin Peaks next year. It was a very good episode for Carol who continues to be the best written female character. Just when it seemed she had squared away her identity as one who can kill whenever necessary, she's faced with having to kill a woman she really feels for and the full meaning of killing accumulates more weight than she expected it could. It's a great dimension to the new direction the show's going in where the U.S. seems to be turning into a system of competing warlords developing feudal tribute systems. I really like that idea, I only wish it wasn't so poorly executed in the finale.

"Last Day On Earth" or "Hey, Everyone, Stay Cocky as We Walk into Every Obvious Trap" would have been really good if it'd been well written. I like the idea of Rick and his group learning they could be humiliated, that taking over the world wasn't as easy as they thought it was going to be. Going over the line and learning to be merciless is not the key to power when there are other people with more advantages. But, jeez, surely by now Rick and his crew would know better than to stop their vehicle between two hills to inspect some zombies chained up in a suspicious manner. Surely they'd know better than to take an obvious prompt to stop under a bridge without inspecting the bridge. Surely Daryl and Sasha--particularly Daryl--would be better at hunting people by now. The fact that they're easily outsmarted by the same group they'd easily outsmarted a few episodes earlier makes it seem even more ridiculous.

So it undercuts the ending of "Last Day On Earth" completely. When the characters act so dumb they don't even seem like the same characters anymore, accepting the reality of the situation requires a leap of imagination I don't want to make because I'm annoyed.

But I think the show demonstrated with its season five premiere that it's ready to jettison an idea when the writers realise it has no legs. Maybe by next season they'll have thought things through better.

You know, season six ended in a very similar manner to season four, actually, with the group being captured by people who for only slightly more realistic reasons weren't trying to kill or injure them.

Oh, in case anyone's wondering if I have an opinion on who Negan decides to beat to death . . . I have no idea. But I'll guess anyway. Glenn? No. Rosita? Maybe Rosita since that'll cause drama with the stupid Abraham/Sasha/Rosita triangle. Maybe Michonne since she's Rick's love interest now. It really ought to be Glenn after he really shouldn't have survived earlier in the season. He owes us a death.

And, of course, once again Michonne was captured and her sword was taken away.

Posted by Setsuled at 7:40 PM
Email ThisBlogThis!Share to TwitterShare to FacebookShare to Pinterest