No Pequod was Steve (the Bus) 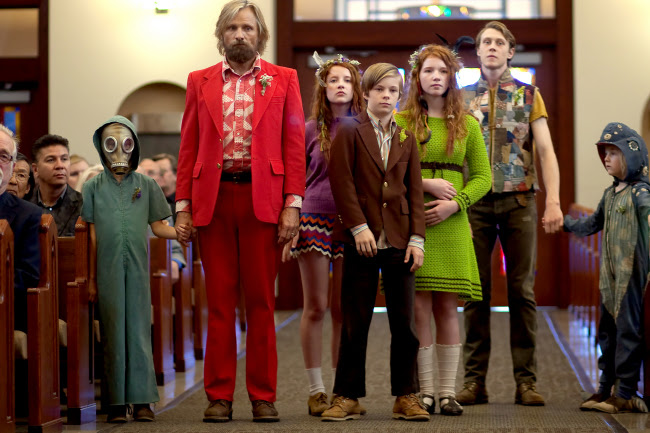 Maybe if Henry David Thoreau had a bunch of kids he took with him to live in the woods, and he lived in the 60s, it might have been something like 2016's Captain Fantastic. Though the film is set in the present day, there's a definite vibe of the 60s in this nice film about a bearded Viggo Mortensen bringing up his kids in the forest. Its a road movie about questions a parent faces regarding how protective he ought to be of his children.

The film's writer and director, Matt Ross, has said in an NPR interview, "the film is not about alternative living communities. That's sort of the backdrop for the beginning of the movie. I think if the movie is about anything, it's really about the choices we make as people, specifically as parents." But he goes on to describe living in an alternative living community in which his mother occupied a role similar to that of Mortensen's character, Ben, in the film. While Mortensen's hair, beard, and suit, and the association with hippies, suggest the 1960s (and maybe, in unfortunate coincidence, Charles Manson), Ross' childhood experiences come from the 80s and he denies with some curious passion that his family were hippies. The details of Ben's scheme for his family are left vague and the perspective of the opposite point of view, represented by Jack (Frank Langella), Ben's father in law, are similarly non-specific. Ben believes in directly answering any questions about life and death his kids ask, he doesn't shield them from the slaughter of animals they eat, and he rigorously trains them in survival skills. Jack is the kind of rich guy who lives in a big house, can call the cops and know people at the station by name, and have them arrest who he wants. If Ben shows up for his wife's funeral, Jack's daughter, Jack says he'll have Ben arrested.

Ben explains at the beginning of the film to his six sons and daughters quite candidly that their mother has committed suicide after suffering from bipolar disorder for some time. This frankness is humourously contrasted with the nervous, normal sidestepping Ben's sister, Harper (Kathryn Hahn), and her husband, Dave (Steve Zahn), attempt to do at dinner in Harper and Dave's home. When Ben shows how much better educated his youngest daughter is than Harper and Dave's typically ignorant teenage sons, it seems like Ben has the right idea.

The movie tells you how to write a review when one of Ben's daughters is reading Lolita and he tells her not to give him the plot or to use vague words like "interesting" in discussing it. So I'll heed the good advice and move on from plot description--plot is not the film's strong point, anyway, particularly in the last act where seemingly very important things are jumped over. Particularly the relationship between Ben and Jack, which inexplicably goes all over the place--one moment Jack wants to arrest Ben, the next he's inviting him to stay. Ben's philosophy of hypereducation is pretty inconsistent, too. His kids have detailed knowledge of medicine and physics but when his wife's funeral is held against the wishes expressed in his wife's will, Ben's only solution is to storm the event and make a scene rather than taking more effective legal action. Ben's eldest son, Bodevan, pretends to be a religious home-schooled kid when a cop pulls them over, but then literally becomes the stereotype of the sheltered home-schooled kid when he meets a girl and almost immediately proposes marriage to her. It's a bit broad and it's hard to get traction on Ben's parenting ideas when the results are so inconsistent in the kids. The biggest problem in the film is the absence of the mother--her death does motivate the plot but it's hard to judge her and Ben's parenting when we get only hints of what the family environment was like when she was around. This is a crucial problem when the film is at its heart about decisions in parenting. Ben and his kids always feel a little distant.

In Sheila O'Malley's review of the film, she says, "'Captain Fantastic' treats the situation (and Ben) so uncritically and so sympathetically that there is a total disconnect between what is actually onscreen and what Ross thinks is onscreen." I think there's some truth to this though Terry Gross, in the NPR interview, specifically brings up to Ross the contradiction in the fact that Ben is an authoritarian teaching free thought and Ross says this contradiction is intentional; "He's not the protagonist, and he's not the antagonist. At times he is both, as are other characters." Although the film is in kind of an ideological bubble, certain to be appreciated more by liberals than conservatives (despite a surprising heterocentrism when Ben defines sexual intercourse for one of his children), I think there is enough charm in the aesthetic of Ben and his family and their adventures. There's a pop smugness in the kids being surprised at all the fat people in the U.S. and Ben's casual mockery of religion and consumerism but watching the kids wielding hunting knives and spouting detailed anatomical knowledge is very charming. Mortensen's performance is of course very good and he and the kids have a wonderful chemistry.

Posted by Setsuled at 12:27 PM
Email ThisBlogThis!Share to TwitterShare to FacebookShare to Pinterest