The Glass is Half Trek 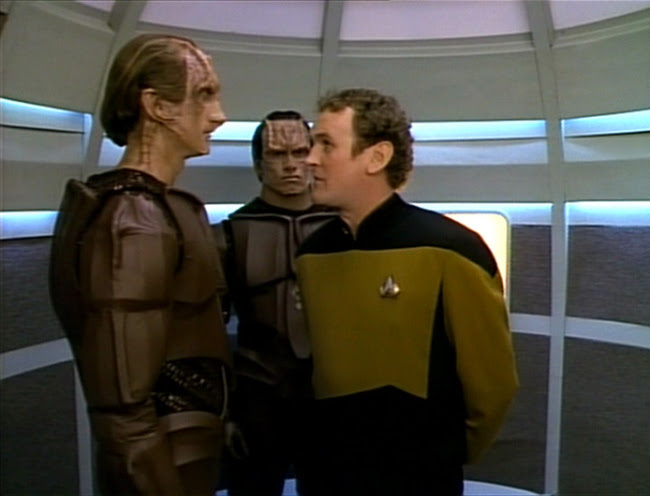 I've found myself in a Star Trek frame of mind. The past couple weeks I've been watching from the middle of the fourth season of Star Trek: The Next Generation, picking up with "The Wounded", an episode that remains a nice, carefully written story about soldiers adjusting to peace with the enemy, the episode marking the introduction of the Cardassians. It prominently features Colm Meaney as Miles O'Brien on the heels of his marriage to Keiko (Rosalind Chao) in "Data's Day", the previous episode. So each episode of the show wasn't entirely stand alone and O'Brien's story turned out to be one of the most long running and interesting in Star Trek history, the character introduced in The Next Generation before going to Deep Space Nine. His marriage to Keiko and the birth of their child being a story woven from minor incidents in larger plots. Meaney's understated and effective performance is a big part of why it works so well. And unlike any major character in the long history of Doctor Who on television, he's Irish *cough*.

I also watched the episode "Clues" which I thought a Doctor Who audio play had ripped off but it turns out, according to Wikipedia, "Clues" bears a strong resemblance to an episode of Red Dwarf, a show I've never seen. So it was another instance of Star Trek generously borrowing from a British series it assumed its American audience wouldn't be familiar with.

Since I've been compulsively thinking of everything in terms of Cavaliers and Roundheads in the English Civil Wars, it occurred to me that Doctor Who would be a Cavalier and Star Trek would be a Roundhead, Irish relations notwithstanding. You can be the Doctor's companion if he thinks you're charming and you ask, you have to graduate from an academy to be Picard's companion. Though of course, as John Milton griped about at length, Parliament in the 1650s became just as susceptible to being manipulated by favours and cronies. The Doctor always seems to like it when he happens to get a companion with a lot of technical skill and training. I don't think any Doctor liked a new companion as quickly as Three took to UNIT scientist Liz Shaw, normally he has to be gradually won over.

Posted by Setsuled at 3:17 PM
Email ThisBlogThis!Share to TwitterShare to FacebookShare to Pinterest