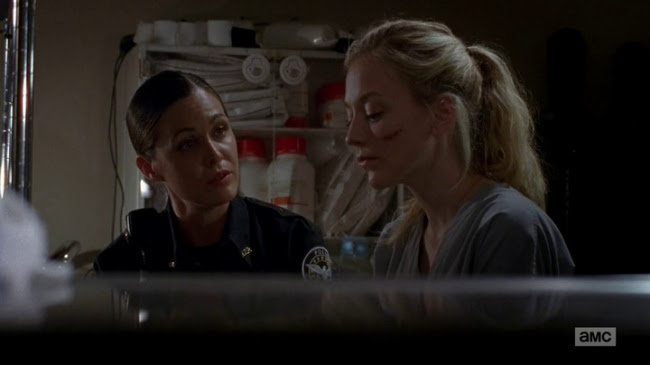 Since last I wrote here about The Walking Dead, I finished season four and have gotten about halfway through season five. Four was my favourite season of the series so far, with ideas of rough, undead frontier justice tempered by melancholy and bitter hope. Season five has been more uneven so far, moving from episodes that awkwardly retread season four to episodes that follow up on season four's ideas in an interesting manner. 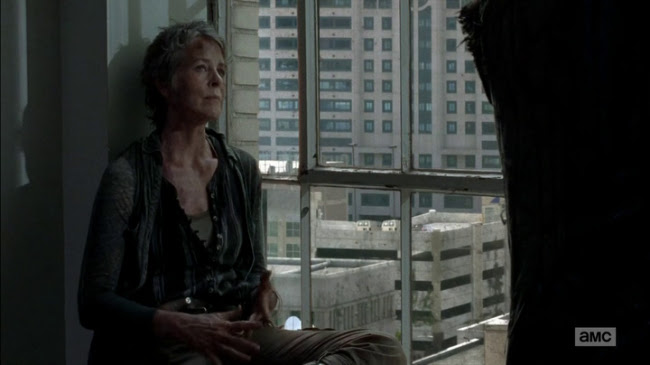 The show continues to have trouble writing female characters who grapple with the same moral challenges as the male characters, the one exception being Carol. Season Four's "The Grove" is a highlight of the series but enhanced considerably when not taken in isolation. Carol seems to be descending further into a distinctive Hell--there's a horrible logic in the fact that she has gone from an abused woman to a mother who loses her child to finally having to face the fact that she needs to kill children. In episode six of the fifth season, she tells Daryl how she feels like she's had several identities that have each been burned away. Even the coldly pragmatic woman capable of murder she became in the prison lacked adequate psychic defence for this world.

In the same scene, she tells Daryl that he seems like a man now, presumably distinguishing him from the childlike idealist he was when he first bonded with Carol in season two. We know what's changed--he's fallen in love with Beth in a delightful episode from season four, "Still", which nonetheless was written by someone who clearly knows very little about moonshine. Beth has her first taste of alcohol in the episode, a skinny young woman downs glass after glass of moonshine like it's water and can still have soul searching conversations with Daryl. A woman twice Beth's weight would've blacked out by then, or at least gotten violently sick, from something half the strength moonshine tends to be. 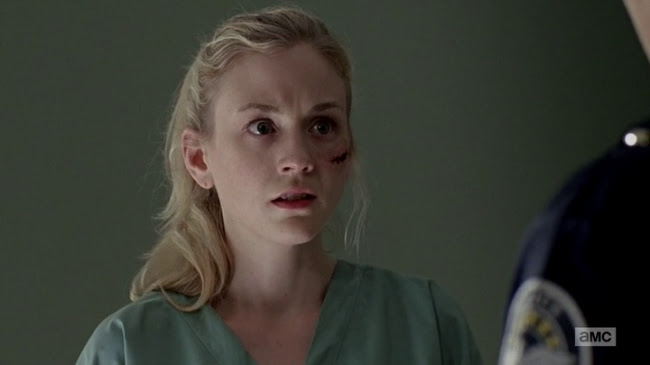 For a show with a reputation for harsh reality, Daryl and Beth's story is in a pretty high atmosphere. Two of the most physically attractive and taciturn characters on the show, it's nice enough watching the two bask in their mutual prettiness a while. But Daryl opening up over several drinks feels quite credible and, like Carol later observes, he does seem like a little kid stepping cautiously into an adult world he's avoided by living in the woods for so long, letting his older brother take the lead. But the show decides to end on this tantalising edge, first in "Still" and then later in "Coda". Beth is snatched away each time before Daryl can actually explore these new feelings, the second time permanently. I suspect the writers just didn't have the confidence to explore this territory. In the end, it's actually a lot easier to write about having to make the horrible decisions about life and death. Ending the relationship on the first flush of chivalric feeling allows them to end on a fantasy high note--awkward but valiant Daryl and sweet, innocent and chaste Beth (she doesn't seem particularly interested in Daryl one way or another).

Beth wasn't a very complex character but she was sweet and her singing as part of the "more" than surviving developed in her conversations with the doctor in "Slabtown" was a nice element to the show. But "Coda" ends with another premature ending to promising material by killing both Beth and Dawn whose relationship was just beginning to become complex and interesting. The fact that so little about their deaths made sense--why would Beth do what she did? Why would Dawn try to have this hopeless pissing contest?--makes the moment all the more frustrating.

The one disappointing thing about season four to me was Michonne's back story where we learn that before the apocalypse she was kind of a yuppie. I would so much rather she had some over the top history of training with a kendo master on Mount Fuji for years or something--something to support her skill with the blade. Oh, and of course, season four ends with her being captured and getting her sword taken away. Again. I'm hoping this will be the grand finale of this cycle since they made such a big deal out of her getting the weapon back this time.

Posted by Setsuled at 10:30 AM
Email ThisBlogThis!Share to TwitterShare to FacebookShare to Pinterest