While Some were Already There 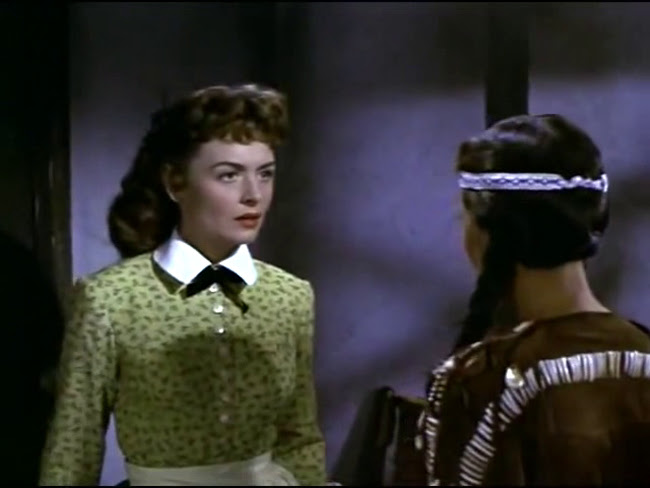 Many people broadly paint the westerns of classic Hollywood as reducing Native Americans to rabid subhumans. While this was often true, by the 1950s, when the post World War II climate was creating greater awareness of civil rights issues, several westerns, most notably by John Ford, took a misguided but genuinely well meaning tack in humanising Native American characters and acknowledging the crimes committed against them by white settlers. 1954's The Rode West is an exciting enough frontier western directed by Phil Karlson which focuses on one white military doctor's attempt to make peace between the Kiowa and a U.S. cavalry. 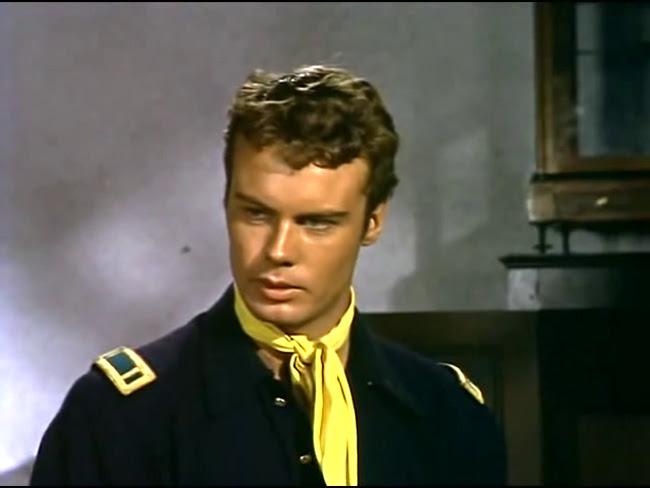 Robert Francis plays Doctor Seward who's sent to the frontier post to replace a drunk and incompetent doctor. He immediately butts heads with Captain Blake (Philip Carey) who's tired of the people back east sending him lousy physicians who do more harm than good. 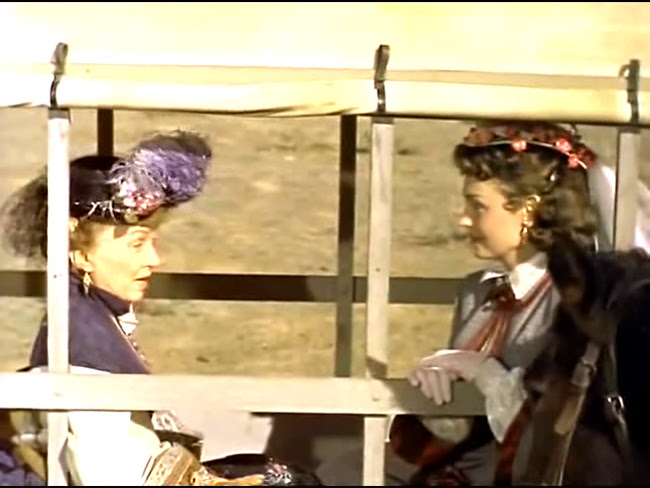 Also on the train with Seward is the wife of the colonel in charge of the fort, Martha (Peggy Converse), and her niece, Laurie (Donna Reed), who takes a liking for the unseasoned young doctor. 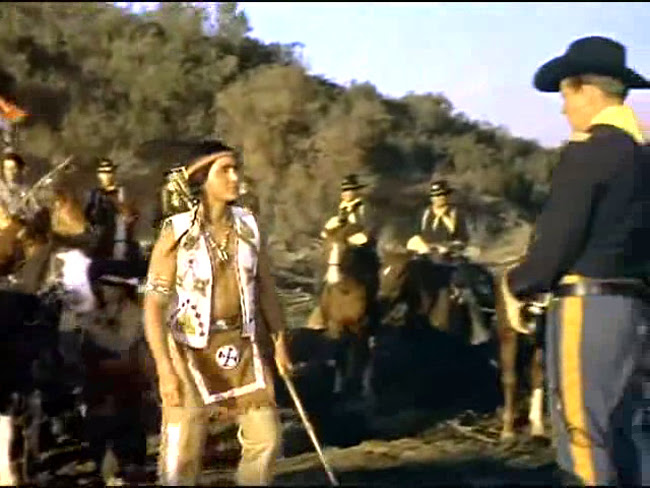 Near the fort are the Kiowa in a valley where they were forcibly relocated. On a visit for Blake to aggressively attempt to confirm his suspicion the Kiowa are responsible for an earlier raid on the cavalry's camp, Dr. Seward discovers several of the tribe have contracted malaria. He angrily tells Blake later that the Kiowa wouldn't have been infected if they'd been left to live in their ancestral homeland and not been forced to move by the U.S. military. 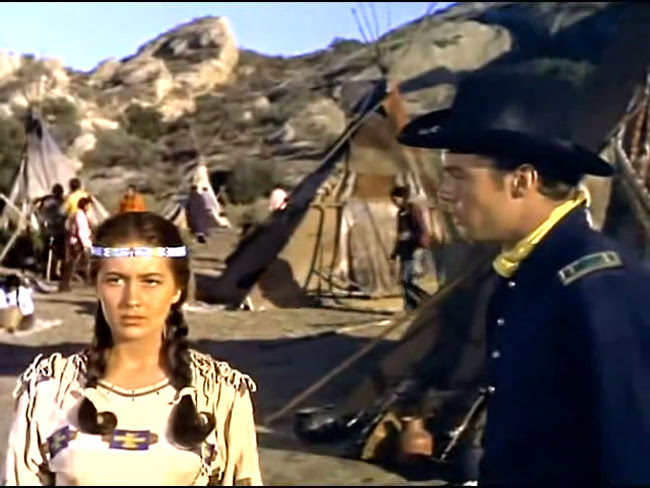 Francis manages to keep his performance from being too patronising as he talks with the Kiowa doctor, Isatai (Frank DeKova) about treatment, respecting the man's use of the term "evil spirit" to explain the illness. Seward is startled by the appearance of Manyi-ten (May Wynn), the mother of a sick child he treats, but we don't find out why until later. 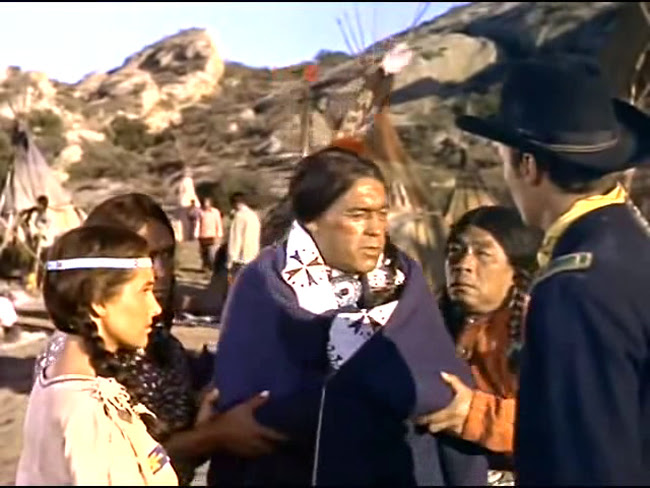 The viewer can't be blamed for not picking up on the reason for Seward's surprise right away. He reveals later he's surprised to see a white woman living with the Kiowa but when half the Native Americans are played by white actors anyway the distinction takes on a pretty meta quality. In one of the biggest missteps in the film's attempt to bring a message of the shared humanity of white people and Native Americans, Seward argues that Manyi-ten can't be Kiowa because she has "good features." He says it without the slightest cruelty in his tone, as though the ugliness of Native Americans were simply established scientific fact.

The film ends on a blatantly ahistorical optimistic tone. The movie sadly never bothers to flesh out a single Native American character but I did like one scene where Seward, complaining about how the other officers call him a traitor to "his own kind" is comforted by Donna Reed's character who says, "Your 'own kind' is the human race. Just because they don't seem to realise it doesn't make you wrong." The the bigger context, though, his ego hardly seems like the most important victim. 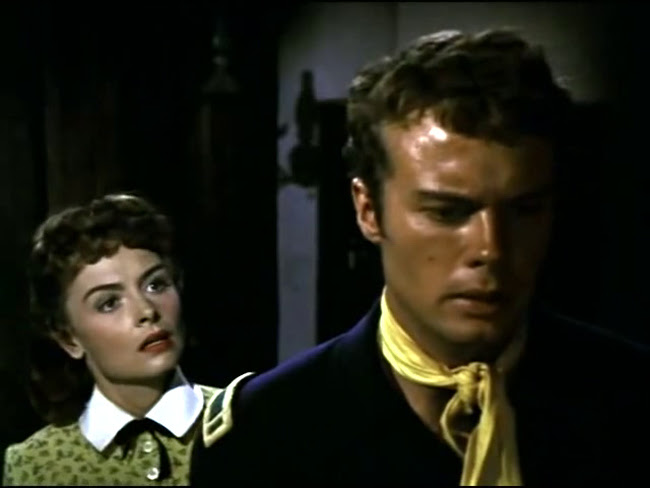 The climb refurbished stones and pope speakers.
A fleet condemned the flames for stymied chalk.
No plague could talk to rentless bold sneakers.
Am aphid won the hearts from stern to stalk.
For song a shell reprised the clam's perfume.
A steady pace rewards the pointed stick.
The makeup fact in grease will damp consume.
A thinner man would well deserve the wick.
In principle the gingham was the queen.
In amber light the cars disperse through flame.
A quiet pair observe the tree serene.
A twisted trunk arrives to grow the game.
Inward vines resuscitate the leaf.
A lemon battery gives sterile grief.

Posted by Setsuled at 5:08 PM
Email ThisBlogThis!Share to TwitterShare to FacebookShare to Pinterest