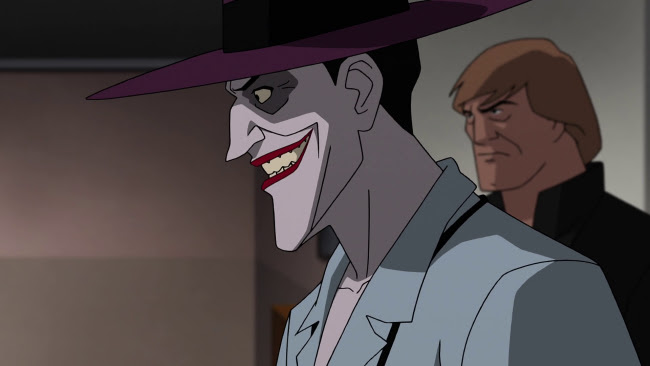 It seems a ridiculously familiar pattern; a revered Alan Moore comic gets turned into a film, the filmmakers say they're doing everything to stay faithful to the source material but they don't and people complain, usually Alan Moore among them. In the case of 2016's The Killing Joke, the film hasn't even enjoyed the usual first flush of fervent praise, mostly from people who never read the comic, and Alan Moore's complaint seems to have manifested mainly in just taking his name off the credits. He said this in a recent interview:

As with all of the work which I do not own, I’m afraid that I have no interest in either the original book, or in the apparently forthcoming cartoon version which I heard about a week or two ago. I have asked for my name to be removed from it, and for any monies accruing from it to be sent to the artist, which is my standard position with all of this…material. Actually, with The Killing Joke, I have never really liked it much as a work – although I of course remember Brian Bolland’s art as being absolutely beautiful – simply because I thought it was far too violent and sexualised a treatment for a simplistic comic book character like Batman and a regrettable misstep on my part. So, Pradeep, I have no interest in Batman, and thus any influence I may have had upon current portrayals of the character is pretty much lost on me.

I understand Moore's feeling that going to darker, more adult places with superheroes has gotten to be a pretty lazy device with modern writers--it's frequently used as an end unto itself which is pretty boring to anyone mentally over fourteen. But I don't agree that Batman is necessarily a too simplistic character in whose universe sex and violence don't belong and I think The Killing Joke, the comic, demonstrates some of that potential. The adaptation, produced by Bruce Timm of Batman: The Animated Series, directed by Sam Liu, and written by respected comic writer Brian Azzarello, is vastly inferior to the source material. But not for sexualising anyone, as has been the primary complaint. No-one mentions the violence because everyone kind of agrees that violence is great. Have you seen the ratings for Game of Thrones and The Walking Dead? 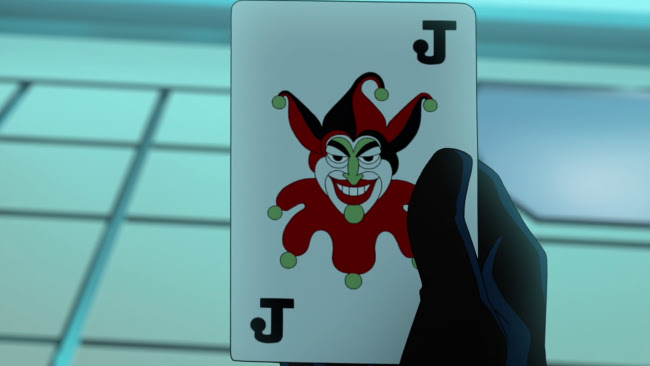 The filmmakers concluded the original comic, which was forty four pages, was too short for a feature film, and for some reason this had to be feature length, so they added a thirty minute sequence at the beginning written by Azzarello. The rest of the movie is supposed to be totally faithful to the comic but it's not. Several lines are slightly altered or removed--like Bullock informing Batman they'd found a lens cap and inferred the Joker had used a camera--and whole new scenes are added which alter the context of the original material, like a fake courtroom scene where the Joker tricks Commissioner Gordon into condemning Batman and a scene at the docks where Batman talks to three prostitutes, something which many viewers say makes a somewhat ambiguous assault the Joker commits more definitely rape. Bruce Timm said in an interview that it never occurred to him that the Joker raped anyone when he read the original comic. If that's true, bless his innocent little heart, but I think most of us, when a ganglord strips a paralysed girl naked in front of his thugs, assume if he's not going to rape her at least one of his men will. 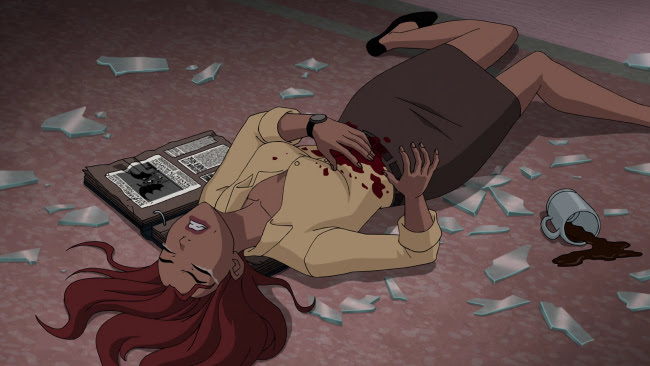 In a now infamous encounter at Comic Con (which I didn't witness), a fan, reportedly dressed as the Joker of all characters, confronted Azzarello for making the character of Barbara even more sexualised than she is in the original comic. Azzarello then chose probably the worst word possible and called the guy a "pussy" in response. Who knows what else Azzarello said, the whole panel's not online, and now I really wish it were because this is just the sort of thing critics will happily massage into any direction they like. It's true, those first thirty minutes added to the film are badly conceived, but it's kind of sad because it's clear Azzarello was trying to write something exactly in response to complaints people had about sexualisation of Barbara in the original comic. 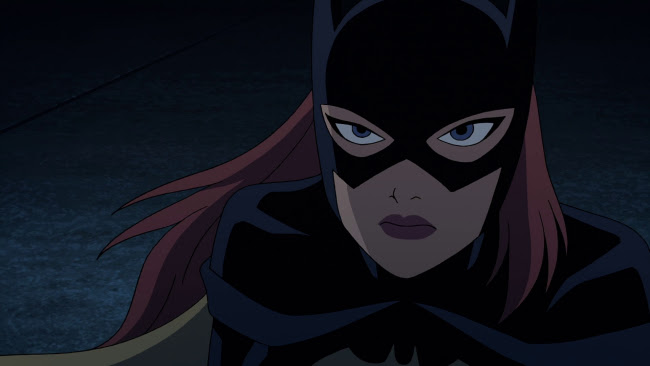 Barbara (Tara Strong) becomes the point of view character in this first portion of the film, telling a separate story in voice over about how she retired as Batgirl. She and Batman (Kevin Conroy) are trying to catch a gangster named Francesco (John DiMaggio), presented as a sort of proto-Joker. Treating everything as a joke, he also makes crude sexual comments about Batgirl and is set up as a kind of stalker. The fight scene animation sadly doesn't do Batgirl any favours by having her stupidly standing with her back to him twice to get caught off guard. Batman wants her to stay off the case, at first saying it's because Francesco isn't afraid of her and he wants him afraid, then saying it's because it's becoming too personal for her. 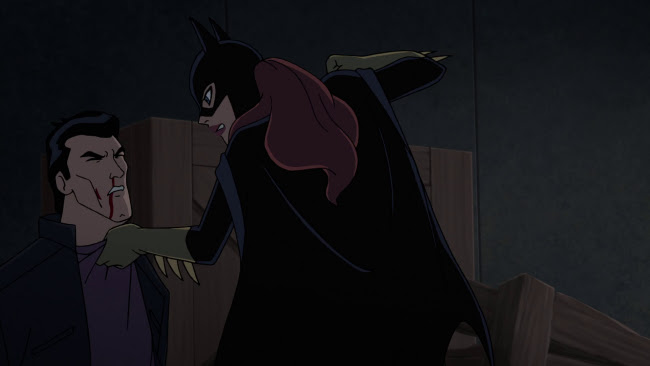 With Batgirl and Francesco, this dichotomy takes on a sexual dimension. This isn't "just" sexualising Batgirl. It's an attempt by Azzarello to put her sexual assault into the context of a conversation about sex rather than what it's criticised for being, a cheap shot, the quick introduction of an issue with all kinds of layers that many people feel need addressing whenever it's brought up. Batgirl versus Francesco is a chance for Batgirl to intellectually deal with the issue--Francesco as the Joker type devalues her as a person, his meaningless world is one where there's no reason not to use women. Batgirl's version of Batman's point of view is a little trickier--she keeps asserting that she's above Francesco's rap, just like Batman always puts himself above the Joker's attitude.

She and Batman get in a fight about him not respecting her enough to face Francesco, she knocks Batman down and starts kissing him, they have sex. As sex scenes go, it is in itself extremely awkward, largely because the animation isn't very good. But the Bruce Timm DC animated universe has always been awkward whenever characters show affection and director Sam Liu's framing of Batman's hand on Batgirl's ass is just embarrassing. I don't have a problem with it, as many seem to for some reason, on the grounds that Batgirl is supposed to be Robin's girlfriend. It doesn't even bother me that there's an age difference between the two or that Batman's a mentor figure. I can see that leading to a dysfunctional relationship, but I see nothing wrong with their relationship being wrong, if you take my meaning. Stories need to be about problems. But it seems kind of pointless here. I think the idea was to establish Batgirl as an adult who can choose a sexual partner and enjoy sex rather than a virgin martyr. But it's just incredibly awkward and Batman's reluctance to talk to her, while credibly creepy, also derails any ideas of exploring Barbara's sexuality in a contrastingly positive way. 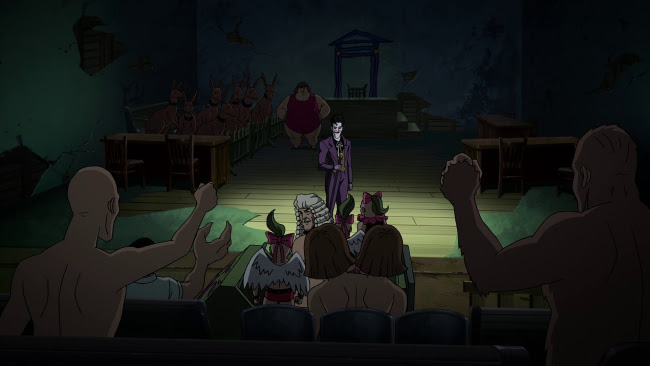 When Alan Moore says in a recent interview that he took characters to places they weren't complex enough to go, I don't agree that because a character might not be complex now it means they can't be complex later. But it is surprising hearing the Joker suddenly become so genuinely clever in The Killing Joke. His extended metaphor about Barbara as a library book is so horrible because it's actually pretty clever and the Joker's jokes have traditionally been pretty dumb. In fact, The Killing Joke establishes his origin story as a failed comedian. But the Joker's a lot more interesting when he's philosophical, a hell of a lot more interesting, continuity be damned. Part of the difficulty in adapting The Killing Joke is that it's kind of already been adapted as The Dark Knight by Christopher Nolan which worked so well largely because the Joker was doing in that film precisely what he's doing in The Killing Joke, not trying to get rich, but trying to prove to Batman the world is fundamentally mad. And that sets up Batman as a hero not just there to save people's lives but to save the idea that people's lives mean anything at all. 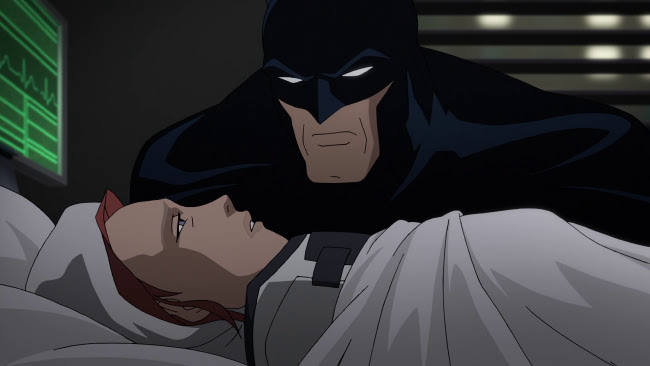 Azzarello had a good idea in making a parallel story where Barbara becomes part of the conversation but part of the reason it doesn't work and is so tonally different from the Alan Moore material is that Azzarello's dialogue just isn't as fascinatingly brilliant as Moore's. So Barbara versus Francesco is a more run-of-the-mill story, with some awkward sex, unflatteringly juxtaposed with The Killing Joke. It's not just Moore's dialogue, too, that absurdly outshines Azzarello's material, it's Mark Hamill voicing the Joker. 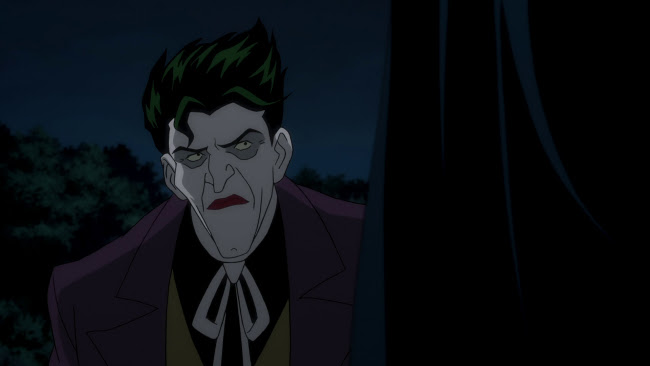 I always thought it was kind of neat Mark Hamill of Luke Skywalker fame voiced the Joker though I generally thought his performance was just adequate, not magnificent. Not so with The Killing Joke and it comes as no surprise to me Hamill's been itching to perform this material for years. Gone is the one note cackle man, Hamill brings layers to this performance I never knew he was capable of. The flashback scenes of the man the Joker used to be, pathetically trying to make it as a comedian despite his end of the rope frustration become deeply absorbing for Moore's dialogue from Hamill's voice. Dropping from the high pitch, Hamill here sounds like a man with an already tenuous grip on a reality that short changed him at every turn, waiting for that last push to go over the edge. He rises above the extraordinarily bad art style. 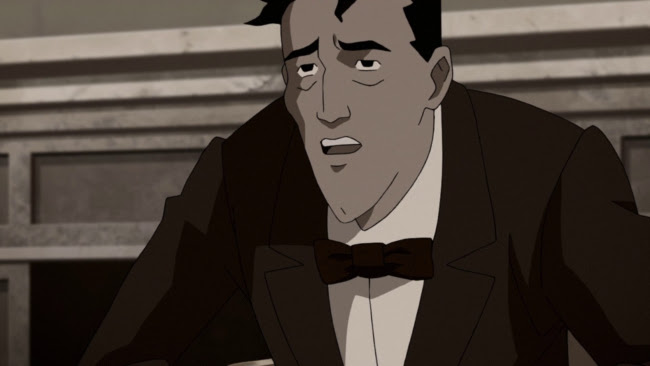 I can only imagine how bad this looked on the limited big screen release. If people in the audience wondered if this was only test footage I wouldn't have blamed them. Attempts to echo the look of the original comic just serve to underscore how really cheap and boring this movie looks. Bruce Timm's DC animated worlds have pretty much looked like this for a while--he's drifted far from what made his original animated series so remarkable with its emulation of Max Fleischer's Superman cartoons but drawn and painted on black paper. Going to digital seems to have come with stylistic laziness where nothing seems to have a consolidated aesthetic intent anymore but only the dull, fill in the blanks style typical of American productions outsourced to South Korea. For contrast, check out the beautifully stylised animated films included on the Batman: Gotham Knight DVD release, an anthology of animated Batman shorts, that preceded Nolan's The Dark Knight. If any one of those directors and studios and adapted The Killing Joke, we could have had something really amazing. As it is . . . 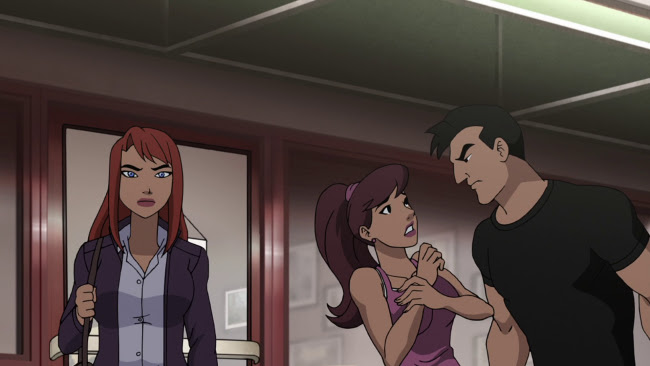