Beyond and Back Again 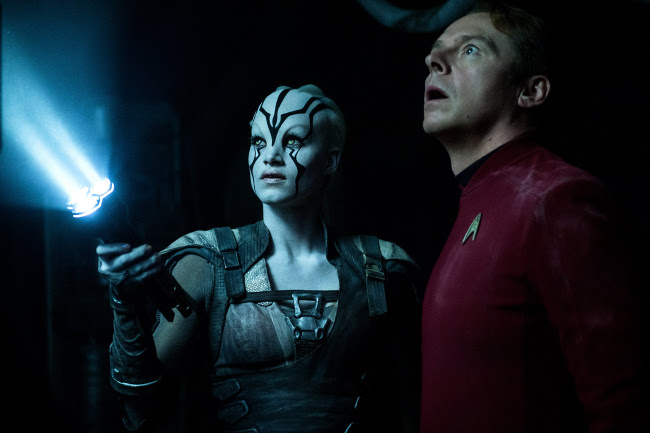 Unity might be a liability or a strength. This is the strongest theme I detected in 2016's Star Trek: Beyond which begins with Kirk contemplating leaving his friends for a vice admiralty and Spock doing something similar. Thanks to screenwriter Simon Pegg, it's an improvement as far as writing goes over the overly emotional first two films in the reboot universe, though director Justin Lin fumbles every action scene with weird framing and too many things close to the camera. But an improved role for McCoy and Pegg's great sense at writing for himself as Scotty made me really enjoy this film.

Also, Pegg shrewdly wrote a really hot girlfriend for himself in Jaylah (Sofia Boutella), a mysterious alien woman stranded on a distant world. She and Scotty have the meetcute where she kicks ass to defend him and he awkwardly nurses his pride with good natured self-deprecation. Caitlin mentioned on her blog a while back she'd heard the character was inspired by Jennifer Lawrence in Winter's Bone, which I can see, though I was reminded more of Leela on Doctor Who, the unselfconsciously adorable yet self-sufficient savage. I like how she calls him "Montgomery Scotty".

McCoy in this film is finally given lots of time to be the classic foil for Spock, though while McCoy Prime had to deal with Spock's apparent lack of emotion, this McCoy has an incredibly sensitive and sort of adolescent Spock to deal with. Karl Urban's practical and irascible doctor is a wonderful counterpoint to this Spock who always seems ready to follow his heart into trouble.

Chris Pine as Kirk almost feels like a supporting character as he's generally concerned with moving the plot along. Uhura (Zoe Saldana) has the meaty dialogue with the villain, Krall (Idris Elba) about unity. Uhura's point that the Federation is stronger because it features so many people working together is undermined by Krall who demonstrates how empathy can be a hindrance. Then, later in the film, the unity of Krall and his allies, who seem to have been modelled on the space monsters from the third episode of Top o Nerae 2, is used against them by the crew of the Enterprise proving . . . him right? At this point the film seems to give over to being a pure action movie. Oddly, the villain ends up having an awful lot in common with the character played by Peter Weller in the previous film.

Still, the rapport was a massive improvement in this film. McCoy dealing with Spock's wound despite his resistance, Scotty being charmed by Jaylah's guilelessness, it was all very attractive. If the next film were entirely about Scotty, McCoy, and Jaylah, I'd be happy.