No-one was the Real Pirate 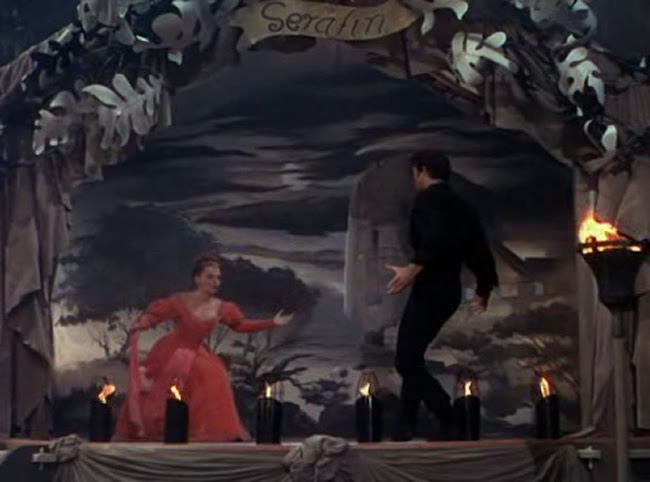 It was a box office failure at the time of its release, despite coming at the height of its star's, Gene Kelly's, career. But now, in retrospect, is 1948's The Pirate really so bad? Yeah, I'm sorry to say, it is. Despite Vincente Minnelli's direction, original songs by Cole Porter, and stars Gene Kelly and Judy Garland, it sinks like lead.

It has its good points. With that pedigree, how could it not? Even the screenplay by Frances Goodrich and Albert Hackett is clever. Set in the early 19th century--though the intensely stylised costumes made it difficult to identify the period at first--it's the story of a young woman named Manuela (Judy Garland) who dreams of one day meeting the notorious pirate, Macoco. However, she explains to her aunt (Gladys Cooper) she realises there's a difference between fantasy and reality so when the unattractive mayor, Don Pedro (Walter Slezak), proposes marriage to her despite her lack of dowry, she agrees for the good of her family's declining wealth. 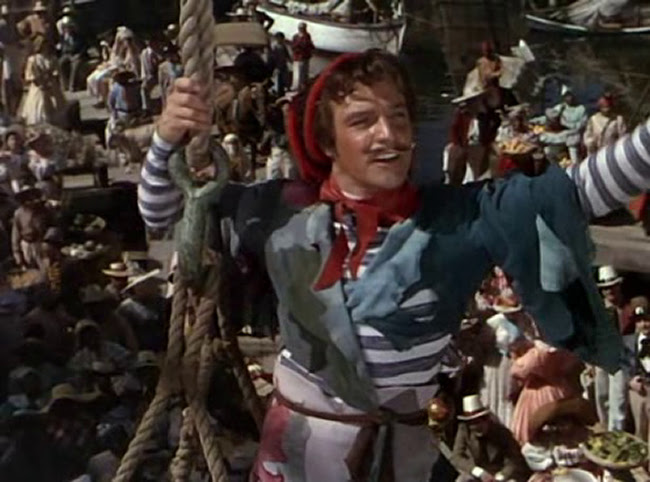 Then the handsome, roguish actor, Serafin (Gene Kelly) comes to town, complicating everything.

All of the musical numbers are pretty clunky but maybe the clunkiest is "Nina", a song Serafin sings as he unashamedly dances from one beautiful woman to another, each one "Nina" to him. The idea could hold water as a number for a charming scoundrel and the costumes and sets are, as always in a Vincente Minnelli colour film, gorgeous. But the oddly repetitious chorus, "Nina, nina, nina, nina," quickly grates on the nerves. 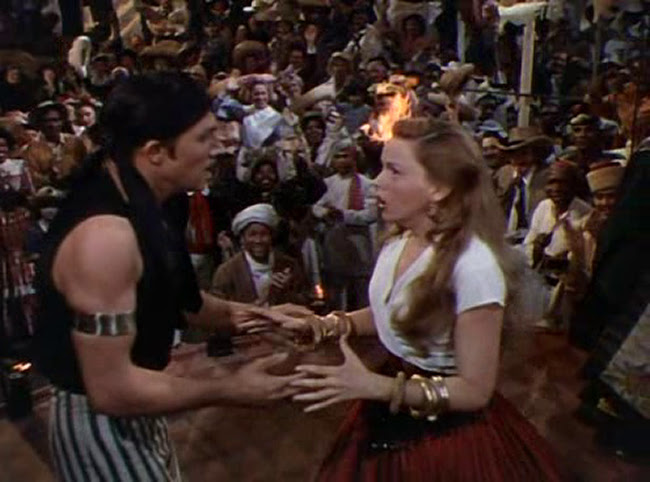 Little better, though, is Garland's "Mack the Black" number. Her hair looks great and the hypnotised woman dancing and tearing off her bonnet should have a sexually dangerous quality about it but once again the chorus thuds dully.

I won't lay all the blame on Porter, though. Gene Kelly gives a mannered performance of the kind he parodies in Singin' in the Rain and Judy Garland's attempt to whip up Lucille Ball style romantic comedy furore is oddly solemn and scary for its self-conscious broadness. She and Kelly have the chemistry of twenty pots and pans falling from a cupboard.

The dwindling rock in orbit swings for moons.
Escape was not his plan, they say of Ben.
Instead, he sought a couch and Lorna Doones.
But stars of steel contain a glowing pen.
Authentic rations wander off the gate.
In droves, the suns abscond to sources cool.
In metal burger skies, she's second mate.
The can insulters sank in swampy pool.
In pistol pods the smithy sims a crate.
In brooms too big to hold the sprinkled grit.
For trolley cars, the hair grows quickly straight.
A shining pattern pulls the total mitt.
A beetle petal makes the court a quilt.
The gold leaf may tarnish but never wilt.