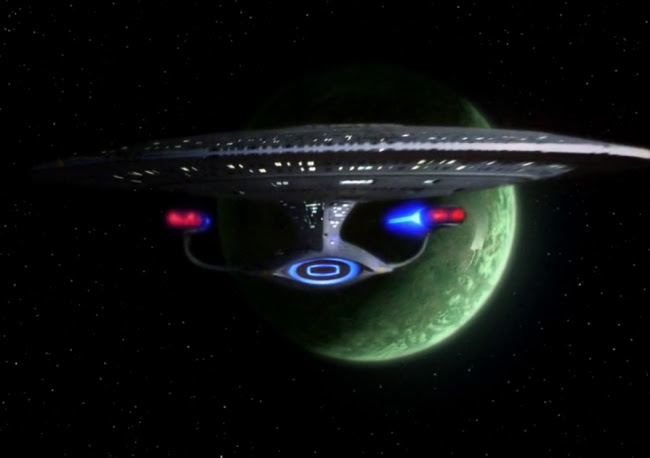 Well, here we are, the big day--the day, September 8, Star Trek premièred on television fifty years ago. But unlike Doctor Who, there's no two hour television special reuniting cast members from through the years, no featurettes put together by CBS or Paramount. I guess that's what Comic Con was supposed to be but at Comic Con it never had the steam Doctor Who or Star Wars has on a regular year. It's simply not as popular. Why not? Well, appropriately enough, I watched an episode of Star Trek: The Next Generation a few nights ago called "Identity Crisis". Star Trek, your supplicant beseeches you, let's consult the holy tapes and look for our answers. 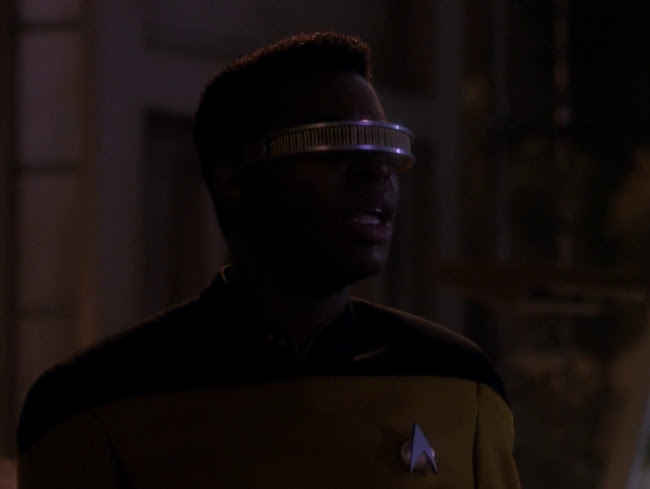 The question is often framed--I know I've certainly framed it this way--what is Star Trek? What are its distinguishing features that set it apart from Star Wars, Doctor Who, Battlestar Galactica, and what have you that made it more popular at one point and less popular now? Well, like Doctor Who, Star Trek has been many things over the years. Ronald D. Moore at Comic Con said the movies are generally modelled on Wrath of Khan and Wrath of Khan is fundamentally different from Star Trek on TV at its best. Nicolas Meyer, who directed Wrath of Khan, wasn't a fan of Star Trek at the time he was hired so he decided to make the movie like a Horatio Hornblower novel, depicting an intense naval battle between nemeses, a model the movies adhered to until it was ran into the ground with Star Trek: Nemesis only to be resurrected by J.J. Abrams, who also publicly said he wasn't a fan of Star Trek.

The Next Generation cast was no longer considered suitable for a franchise because movies that were fundamentally different from the shows that made them successful were unsuccessful. Then J.J. Abrams came and did the wrong thing in the right way again.

Simon Pegg, before being forced to make a movie that also stuck to the Khan formula, also talked about how this was not really TV Star Trek. Though actually, the essence of the Khan model did appear on television now and then, even before Wrath of Khan, in episodes of the original series like "The Doomsday Machine". But more often, Star Trek was more of a Science Fiction series than Doctor Who or Star Wars tends to be, featuring stories about people encountering and reacting to something strange based on a variety of speculations based on real science. This observation has been made often enough. But watching "Identity Crisis" it became clear to me why this became less and less effective. 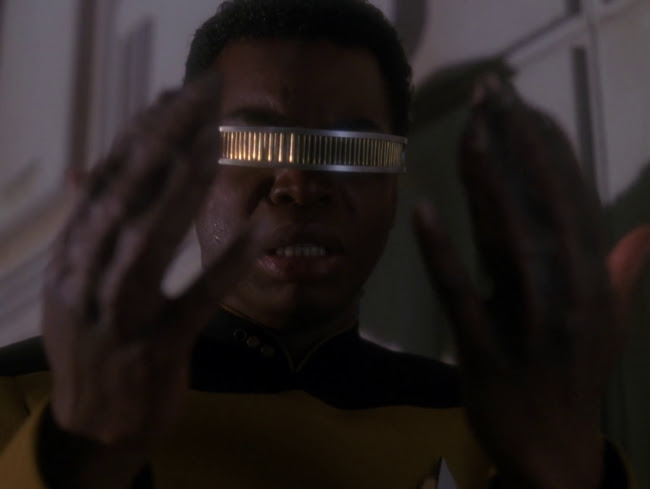 The problem with "Identity Crisis" is that it's not about an identity crisis, not really. Well, in a literal sense it is--the story is that Chief Engineer Geordi Le Forge (LeVar Burton) discovers that he and a former crew mate are slowly turning into alien creatures after being infected on a planet years ago. That's a fine concept except that's all it ever is--Le Forge spends the whole episode playing detective, trying to figure out why this is happening and how to stop it before he completely changes. The episode fails to have him or his former crew mate reflecting on how they feel or showing how it effects the people around them and their relationships. By comparison, one can look at David Cronenberg's version of The Fly to see how this kind of story can be told in a more effective way.

But this is a common problem with how people think about Star Trek and Science Fiction in general, I would speculate because traditionally Sci-Fi fans were the sorts of people who were uncomfortable exploring their feelings. At its best, Star Trek served them what they didn't know they wanted or needed in the form of what they thought they wanted or needed. An episode of the original series like "City on the Edge of Forever" or "The Changling" had speculative science--concepts of time travel and independently evolving artificial intelligence--and used these science concepts to explore human reaction--making impossible decisions about loved ones or feelings of isolation. 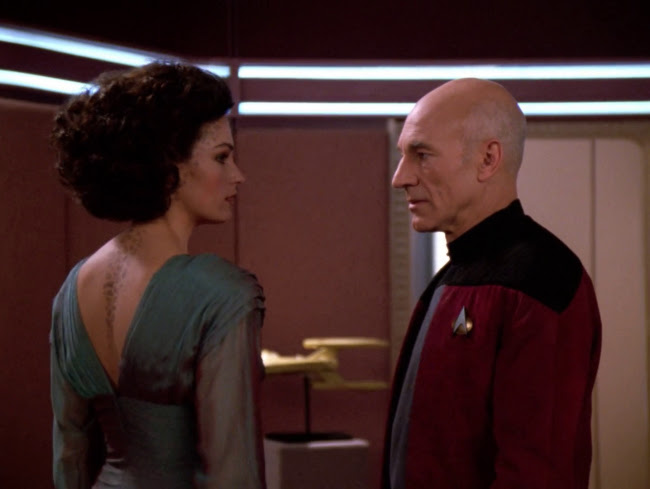 Last year I watched a fifth season episode of Star Trek: The Next Generation that I didn't appreciate half as much when I was kid and has now become one of my absolute favourites. "The Perfect Mate" with guest star Famke Janssen as a rare telepathic bonding specimen of an alien species has a love story more reminiscent in some ways of the original series than of The Next Generation--the captain having to deal with a beautiful alien woman whose cultural practices of love making are attractive and confusing. But by making a character who bonds to an individual, and making all men susceptible to pheromones, the episode nicely takes a new perspective on how much affection is based on circumstance and biology. The dilemma is better presented by Patrick Stewart's Captain Picard, though, not only because Stewart is a much better actor than Shatner but because we can't mistake what he's doing for one of Kirk's famously numerous one-episode-stands. The episode takes what in other hands would have been a broad concept and teases out surprising nuances and challenges to the viewer.

The upcoming Star Trek series, Star Trek: Discovery, is supposedly going to follow the modern model of television, that is a continuing story from episode to episode rather than the old model where everything at the end of each episode generally went back to how it was at the beginning. Of course Star Trek: Deep Space Nine was one of the pioneers of this exciting form of story telling on television but I worry some opportunities for exploring new territory in the old way will be lost by adhering to it. Hopefully this won't be another example of Star Trek desperately trying to keep up with the times by throwing itself out with the bathwater.