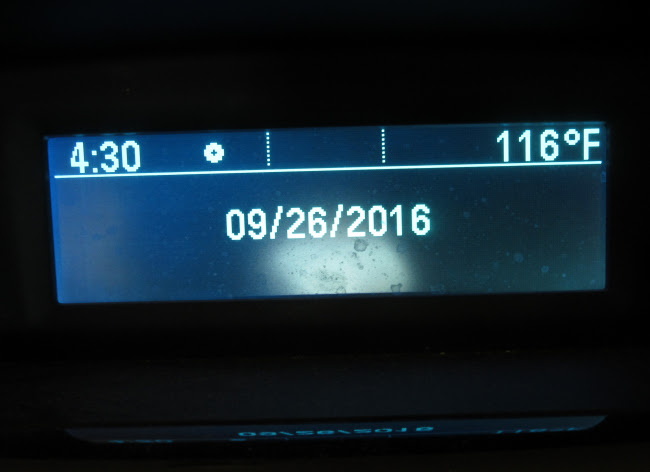 This was my dashboard on Monday. Ah, that crisp autumn weather. It'd been getting down into the 70s on Friday and to-day it was mostly in the 80s, so at least the heat's not as consistent as last year. Though, honestly, I'd prefer it to be since the sudden shift gave me a massive headache over the weekend.

Normally when I post a photo showing off a ridiculous temperature the readout also displays the music I'm listening to. A few days ago, I think my iPod finally crapped out on me for good. I'm hesitant to say for sure because it's miraculously come back to life before.

"Uh oh," you may be saying. "He should have proofread this entry; he wrote 'iPod' instead of 'iPad'." Actually, years before the iPad people used these things called iPods which didn't do much more than store and play music. It didn't even talk to clouds. If I do have to replace it, I sure hope it doesn't have to be something that forces me to Connect.

I feel the world is growing impatient with my old, solitary technology, though. I went into the Amazon store a couple weeks ago with my friend Tim, a few days after it opened. I was excited there'd be a bookstore in the mall again. The place was disappointingly small but more disappointing was the fact that none of the books had prices on their labels. Only bar codes.

"How do you like the store?" asked a young woman who'd been employed to talk the place up.

"I like that you like that!" she said as she tried to figure how to respond while keeping everything positive. She couldn't stop a bit of smugness from creeping into her voice when she said, "Actually you just need to tap it with your phone."

"Oh, really?" I said, taking my old flip phone out of my pocket.

"I see what you did there!" she said as though it had all been my elaborately arranged prank.

"That's classism right there," I said to Tim as we left. Of course, the Amazon store is at University Town Centre, which has always been one of the more upscale malls in the county, located in La Jolla, one of the most expensive places to live in the country. UTC has always had an ice skating rink, at least as far as I can remember. It says something that on Monday I could have gone ice skating there in 116 Fahrenheit weather.

So I've been listening to CDs again. I had The Crow soundtrack in--the first four tracks alone make it one of the great soundtracks of the 90s--"Burn" by The Cure, "Golgotha Tenement Blues" by Machines of Loving Grace, "Big Empty" by The Stone Temple Pilots, and Nine Inch Nails' amped up cover of Joy Division's "Dead Souls". Then there's "Darkness", a song by Rage Against the Machine that hasn't aged well. But, then again, I always skipped it. I tried it on again on Monday to see if I'd changed my mind and when I got to the line, "AIDS is killing the entire African Nation," I groaned and hit skip. It sounded like something Donald Trump would say when he's trying to be sensitive. "Colour Me Once" by Violent Femmes follows which is pretty good and then everything sucks for four tracks, beginning with Henry Rollins' "Ghostrider", which is apparently a cover. Henry Rollins remains a huge mystery to me. It always seemed boneheaded to me that he had a lousy song about Ghostrider on The Crow soundtrack even before I read his crappy sentimental poetry or heard him basically call Robin Williams a wimp for committing suicide (ironically the name of the band who wrote "Ghostrider" is Suicide).

"After the Flesh" by My Life With The Thrill Kill Kult I used to think was just okay and that's basically how I still feel about it--"Snakedriver" by The Jesus and Mary Chain I like but not nearly as much as some of that band's other works. I still really like "Time Baby III" by Medicine, a nice noisy groove--I especially like the line about hands coming up to touch the singer's thigh.

Jane Siberry's "It Can't Rain All the Time" is a song I still can't stand and really feel bad about it because so many people I've known seem to have a massive emotional attachment to it. Well, maybe in another five years I'll try again.

Posted by Setsuled at 7:36 PM
Email ThisBlogThis!Share to TwitterShare to FacebookShare to Pinterest